Home > News > Superyachts Alwaeli and White Cloud anchored side by side 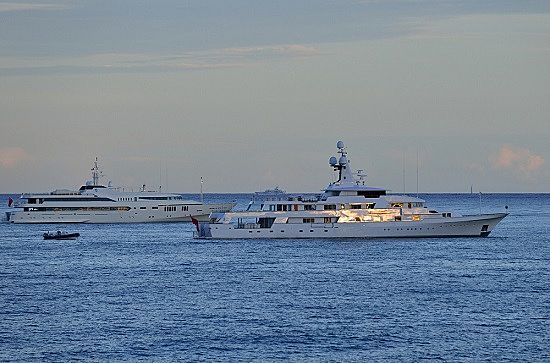 White Cloud and Alwaeli at anchor off Monaco

The 67.30m White Cloud, seen here in the foreground, was built by Feadship in 1983 as New Horizon L. She was built for the late Dutch businessman Bram van Leeuwen, also known as the Prince the Lignac. This hospitable owner used to employ her as his main residence, embarking with her on extended travels at least once every season. In 2004 and 2005 the yacht was completely rebuild by Peters Schiffbau. Alwaeli is a classic 68.5m superyacht launched by CRN in Italy in 1991. She was completely refitted in 2008 by Amels. The initial refit included some interior and exterior changes, and replacing some machinery and systems. Midway through the refit, the owners, already pleased with the refit progress, requested even more work, which in total required nearly 18 months to complete.