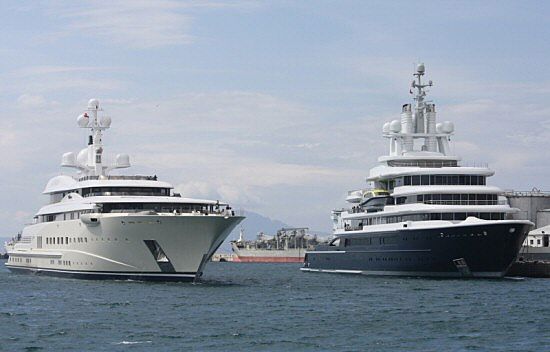 Luna, the 115 metre superyacht was built at Lloyds Werft in Germany, to a design by Newcruise and delivered to her owner in October 2009. Her owner has one of the world's largest fleet of superyachts, including the well known Eclipse. One of her special features is her over-sized aft deck that features a large swimmingpool.

The 115 metre superyacht Pelorus was designed by Tim Heywood with an interior by Terence Disdale. She is powered by twin 5.300 hp Wärtsilä 12V26 engines, and has a top speed of 20 knots. Cruising at 16 knots, her range is approx 6000nm, on 280.000 litres of fuel. Pelorus has an impressive gross tonnage of 5317 tons.

Here the two are pictured in Gibraltar yesterday side by side, Pelorus on the left about to dock, and Luna already docked.