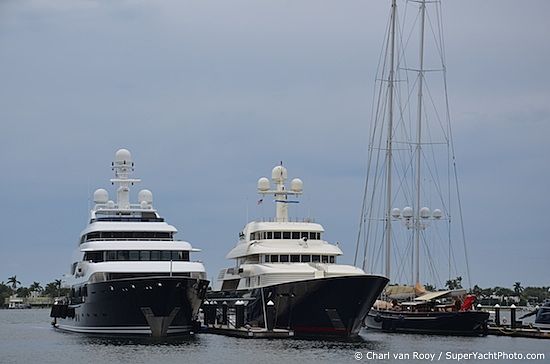 Pictured here in West Palm Beach, Florida, are three impressive superyachts; the 72 metre Martha Ann, the 73.98 metre Cocoa Bean and the 51.59 metre Meteor. Built by Lürssen Yachts in 2008, Martha Ann boasts exterior design by Espen Oeino International, naval architecture by Lürssen Yachts in collaboration with Espen Oeino International, and interior design by Zuretti Interior Design. She is the third of three similar yachts (Titania and Saint Nicholas) ordered by the same owner from the German shipyard.

Superyacht Cocoa Bean was launched by the US shipyard Trinity Yachts in 2013, and is the largest custom superyacht the company had ever constructed. The Royal Huisman sailing yacht Meteor was launched from Vollenhove in the Netherlands in 2007. Built with an aluminium structure, she has a maximum speed of 15 knots and accommodates up to 6 guests as well as a crew of 12 on board.