The Dutch Intec Marine Shipyard is building new premises for yachtbuilding that will meet the very latest demands in terms of the environment and energy consumption. The aim of achieving a low-energy construction process will be met via the use of wind energy (wind turbines on the roof) and solar energy (solar collectors). Additionally, the building will be heated by geothermal power and include a system that generates energy from biomass. 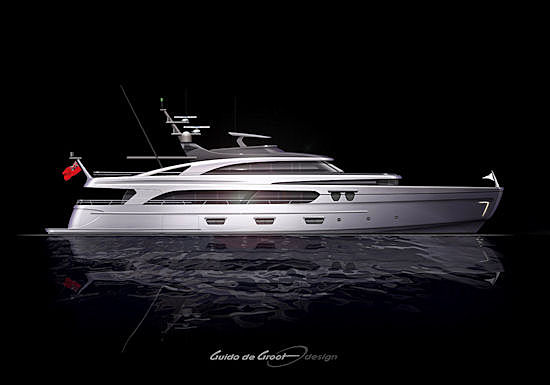 Rooted in the quest for optimal sustainability, Intec Marine Shipyard’s goal is to be a leader in the use of the most advanced systems available. Unique features include the propulsion system and the way energy is generated. One of the major technical elements of a yacht is its propulsion; a system that generally requires a great deal of maintenance. A conventional propulsion system consists of a main engine, gearbox, bearings, propeller shaft and propeller. Motoryachts include two propulsion systems that require a lot of monitoring and maintenance of their rotating parts. This is not the case for Intec Marine yachts, which feature propulsion that comprises a VOID Inline Propulsor (for cruising) or a VOID Linear Jet (for fast sailing yachts).

These systems are generators that only require periodical maintenance, and are much smaller than the usual main engines used in diesel-powered systems. Moreover, they rarely use their full capacity, and in many cases only one generator is needed to achieve cruising speed and charge the batteries. The Intec Marine 90 hybrid includes two 300kW generators and offers low cruising speeds. The Intec Marine 140 hybrid includes four generators with a top speed of up to 25 knots. Due to the absence of large engines, the traditional engine room is replaced by two technical spaces on Intec yachts.

The energy onboard Intec Marine Shipyard yachts is not only generated by the diesel electrical system (generators). The yachts also have several wind turbines as well as solar collectors and a hydrogen-based fuel cell. When shore power is unavailable, the generators are the main source of power. Should the need arise to avoid CO2 or NOX emissions from the combustion engine, for instance in nature parks, the fuel cell uses hydrogen to generate the power needed to sail the yacht. The only emission produced by the fuel cell is water.

Sustainability is also very apparent in other maintenance-friendly aspects of the yachts. Rather than using teak, Intec Marine Shipyard fits decks made of Esthec, a composite material. The yard also uses unique antifouling (developed in cooperation with TNO*) which is less harmful to the environment and prevents fouling. The Esthec decks are easier to keep clean and have a long lifespan. As the drinking water pump and fuel pump are powered by air pressure, they too require very little maintenance.