Home > News > “I want to do the brand justice, and I want to make good on my promise to Björn’s estate.”: Radenko Milakovic, owner of J Craft

Hedge fund manager Radenko Milakovic and his wife Kristina quietly acquired J Craft in 2007. The boatyard on the Swedish island of Gotland builds the 42-foot Torpedo, the fast runabout with chic retro styling that also serves as a superyacht tender or chase boat. The financier and entrepreneur has largely preferred to stay under the radar to date, but is now refocusing his energies on further developing the J Craft brand and its product range. 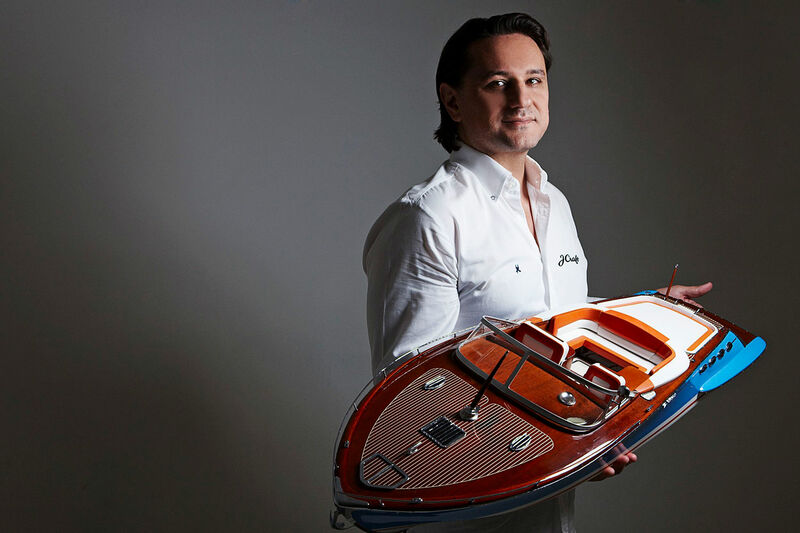 Photo: J Craft BoatsWhat attracted you to J Craft in the first place?

I came across the 38-foot Cabrio Cruiser, the precursor of the Torpedo that was designed and built by Björn Jansson, the founder of J Craft. It thought it was beautiful and so I went up to the guy who was driving it and we got talking. He was Johan Attvik, who was promoting J Craft Boats in Monaco and Saint Tropez. I asked him if I could charter the boat for a month, which turned into two and I had it for the whole summer. The boat had twin Yanmar engines with straight shafts and very small rudders. Turning was difficult until she picked up some speed. I eventually got used to it, but there were quite a few hairy moments when I was thinking, “Hmm, this isn't good enough.” 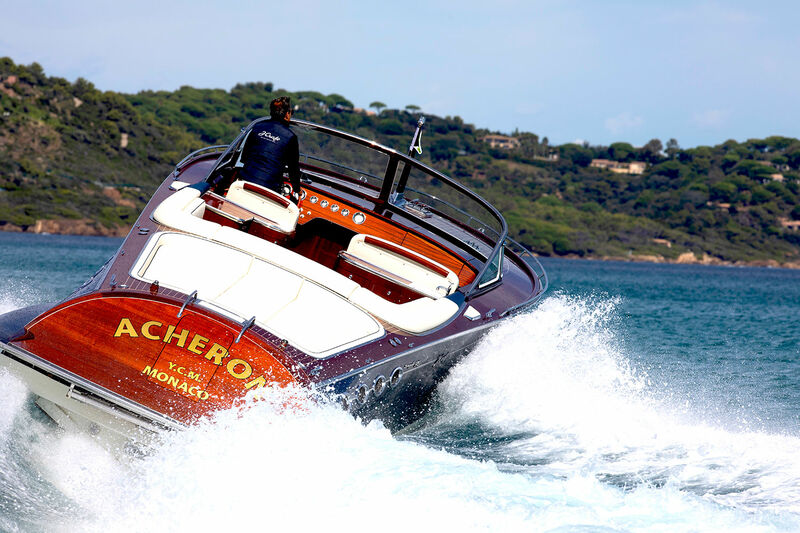 Photo: J Craft BoatsSo how did you end up acquiring the company?

My wife and I loved the look of the boat and by end of the summer I was interested in buying one, but I wanted to make some significant technical changes. Attvik told me he couldn’t sell me a new one because the founder was unwell and the shipyard had been mothballed. I ended up buying an unfinished hull and looked around for the best propulsion system for a non-expert like myself. People recommended the Volvo Penta IPS pods because the joystick controls make handling simpler, so together with Johan Hallén, who was with Björn when he started out in 1999, we made two big holes in the back of the hull and put in a couple of IPS 500 units. She did over 50 knots flat out, but the steering was still terrible. I asked the naval architect how we could make it work: he said it would cost the same to design a new hull form as to modify the old one, so that’s what we did.

Seeing that I was investing all this time and money, I started thinking I’d like to own the trademark. It wasn’t a huge brand, but it had a claim to fame because the the first Cabrio Cruiser was built for the King of Sweden. Björn had fallen seriously ill by this time, but I met with his estate and told them that I loved what Björn had done and that I wanted to keep the same spirit alive as the new custodian of the brand. The estate agreed to sell and I acquired J Craft in 2007. 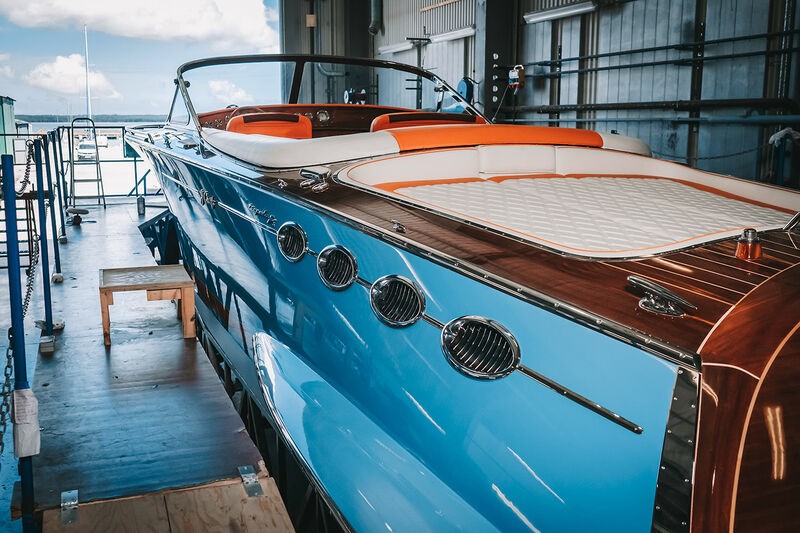 Photo: Anders NybergHow did the Cabrio Cruiser become the Torpedo?

After the acquisition, we all took our time for a few months in order to define what it is that we wanted to improve on what was otherwise a boat we all loved. The hull had already been newly designed around the Volvo Penta IPS propulsion system, so they were perfectly aligned. I wanted her to be cutting-edge technologically, but to look like a ‘57 Corvette that turned into an Airstream if you had to spend a night on board. But at the end of the day, she’s a day boat and we were not going to try and make it anything other than that. I certainly didn't want to create a mini yacht. She had to be fast and ‘leggy’ in the sense that she could cover long distances quickly and our boats have done Saint Tropez to Corsica, Ibiza to Sardinia, even Hong Kong to Hainan, and back. The first new-generation Torpedo, La Decadence, was unveiled in Saint Tropez in the summer of 2009. Since then, we’ve delivered 19 others, including Garcon, tender to 87-metre Ace, and Bourik, tender to 156-metre Dilbar, and introduced the faster Torpedo RS that has the latest IPS 650 engines. 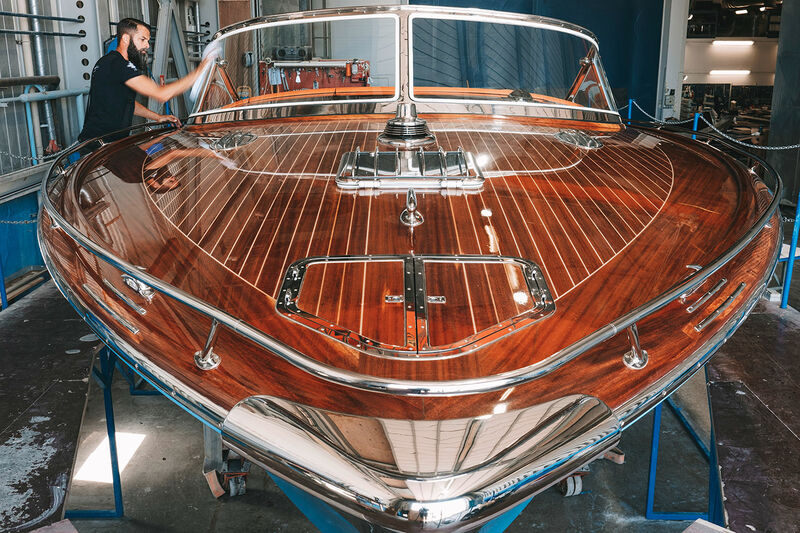 Photo: Anders NybergWhat has been the hardest part of owning a shipyard?

This is a challenging industry in that it is very cyclical, boom-bust in nature. Periods of strong demand are followed by deep and sometimes sustained troughs. At the same time, what I thought was striking, considering the sums of monies and types of owners involved, is the relative mediocrity of a lot of the management teams. While certainly better when compared to when we started a decade and half ago, I still find that this industry attracts a lot of what I call ‘chancers’, people who I believe would find it difficult to work in similar positions in other high-profile industries. I was running a hedge fund out of London and was used to dealing with high-calibre people, strong and dedicated professionals, and so when I first arrived on the scene it was a bit of a shock to me to not be able to find the same kind of talent. 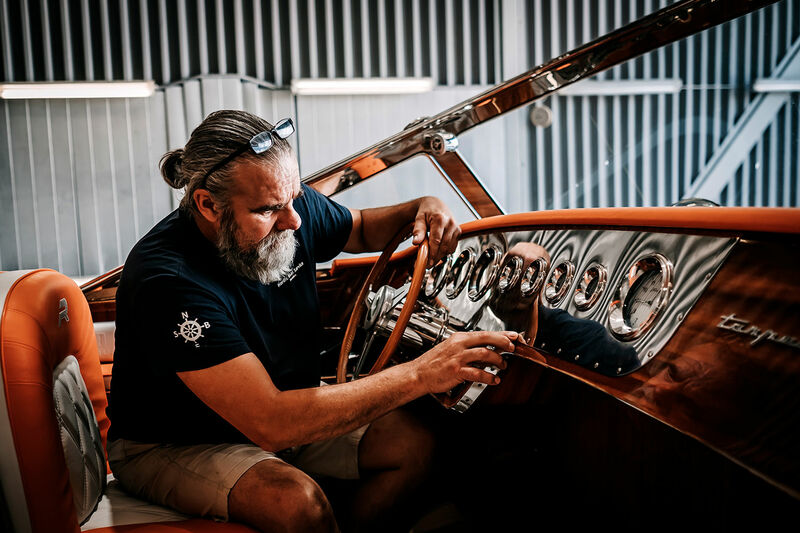 Photo: Anders NybergIn fairness, I took over at the start of a global financial crisis and we still sold boats, but as far as the running of the company and its commercial operations was concerned, we were simply not good enough when it came to promoting the brand. Since then we’ve gone back to basics, continuing and improving on building what we know to be a fantastic product and bringing that across to our clients in a humble but confident manner.

On the other hand, I could not have been luckier with my production team led by Johan, our chief master builder, or as I always say, the real Mr J Craft. They really are at the top of their game. They have always been – and continue to be – consummate professionals and extremely passionate about what they do. 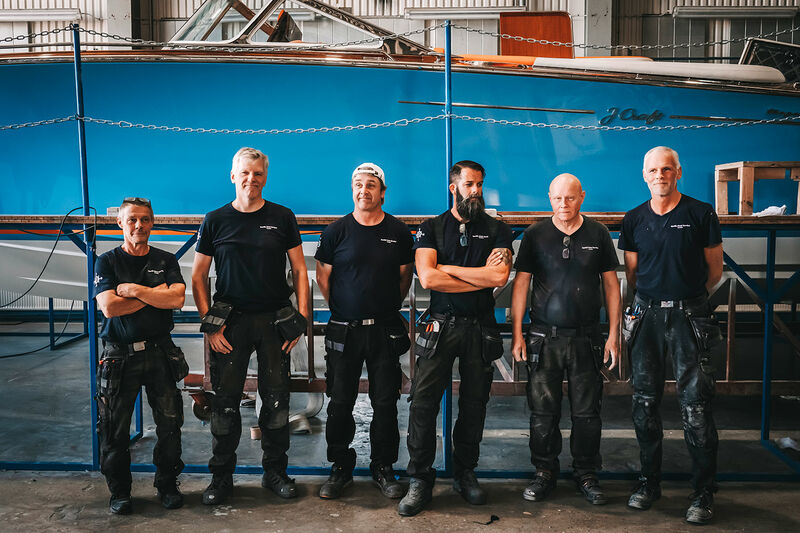 Photo: Anders Nyberg What’s the next step for J Craft?

I want to do the brand justice, and I want to make good on my promise to Björn’s estate. We have a beautiful and very capable product, but we need to put the same effort into developing the brand as we have put into the product. Since buying the company some 15 years ago the pricing environment has caught up and overtaken us, and that has allowed us to develop our business despite paying almost 55 euros per hour for labour in Sweden. You have to remember we build the entire boat in Sweden, not just assemble it, and when looking at the build quality of the Torpedo I think that is self-evident. As far as the company is concerned, it's no longer just a hobby that costs a lot of money, but a business that can be profitable even at low volumes. 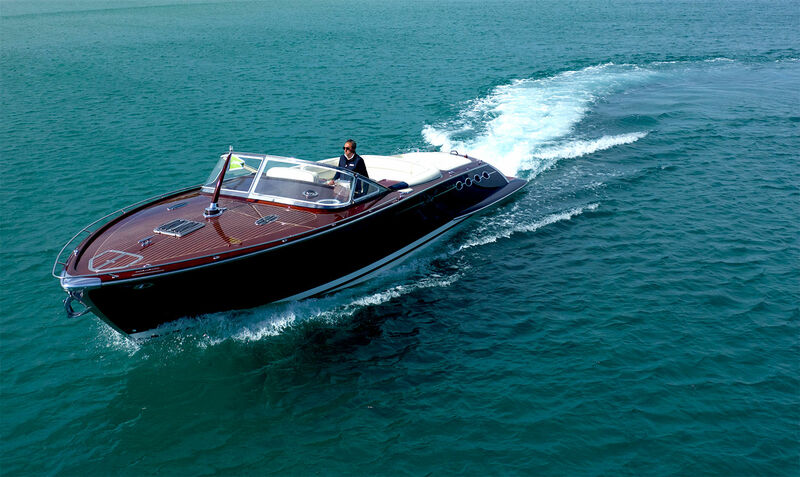 Photo: J Craft BoatsWe‘re in the process of developing a dealer network and we’ll invest in support for these dealers, including speccing stock boats for the US market with the aim of introducing the Torpedo into the US by 2023. On the home front, we've moved into a bigger facility on the island of Gotland and we’re hiring additional production guys, which means we can bring up our two-boat annual capacity to three or four plus. But I don't want our capacity to dictate production; I want sales to do that. We’re also working with various design houses on some exciting new concepts that are based on the Torpedo platform, but offer clients more choice and flexibility in terms of style and functionality. We’ll be able to release more information on that very soon.

As regards our leads, we’ve only ever sold one boat at a boat show and most of our sales come from our existing client base by word of mouth, or from people who literally walk up to us. Just the other day there was a guy who said, “Hey, I really love your boat, can we talk?” You sort of come into their scope of vision and they start chatting with you.

We will continue to be a niche manufacturer concentrating on building the best possible product and selling it to the few, not the many. OK, the Torpedo is still a boat, it floats, but people look at it more like a piece of jewellery, a ‘bijou’. I don’t want to call it a piece of art, but it’s the sort of thing you would hang on your wall if it wasn’t 42 feet long and weighed 10 tons! 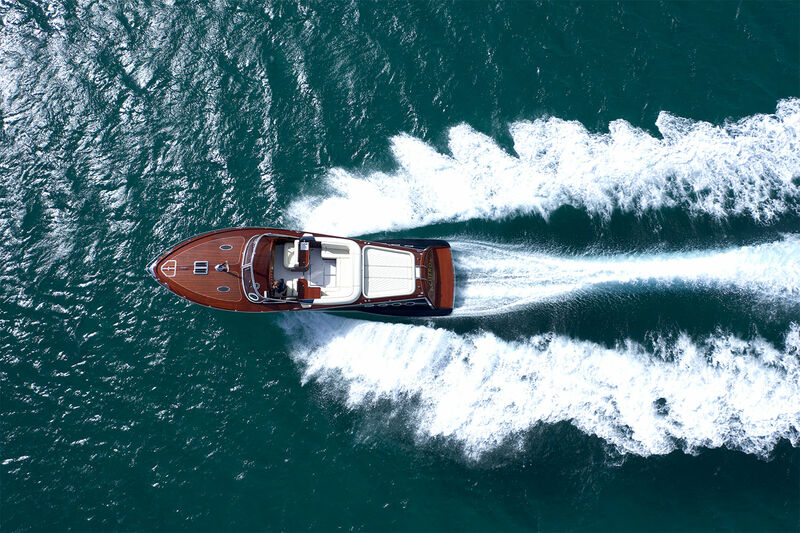