Following the success of the 69-metre superyacht Suerte from 2015 and 2017’s Vertige, Tankoa Yachts from Genoa wanted to keep raising the bar along with their growing reputation as not only one of the best yacht builders in Italy, but the world. Now ready to embark on her maiden season in the Caribbean following a successful Monaco Yacht Show unveiling, all eyes are on Solo as the latest ambassador for the young Italian brand who continues to break barriers and stereotypes in an extremely competitive market segment. 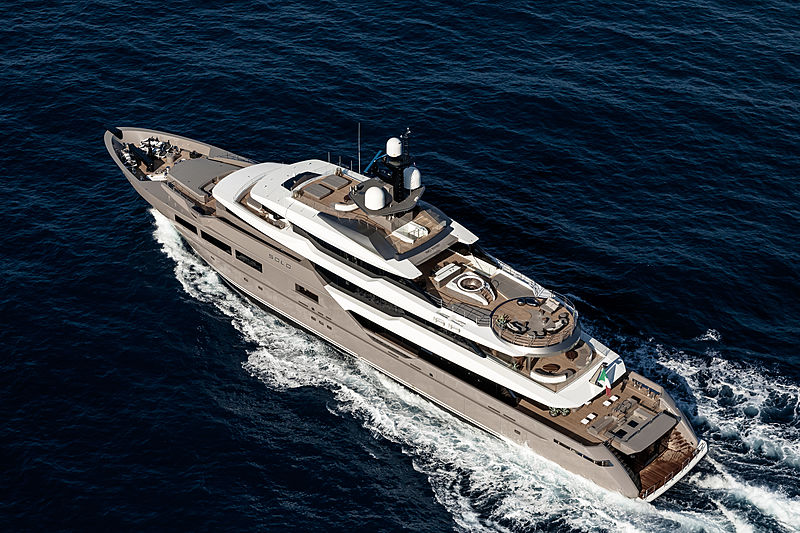 Photo: BlueiprodRather than setting course in an entirely new direction, Tankoa instead picked up where they left off with Suerte, deciding to refine the design and work with Solo’s owner to create something truly unique - for the shipyard and the client. To achieve this, the same award-winning team was assembled, led by Francesco Paszkowski and the studio’s interior master, Margherita Caspirini. As this had to be the most efficient Tankoa yacht ever, the hull design and naval architecture was developed by a long-time Tankoa friend and engineer, Professor Ruggiero and together with a forward-thinking technical team at the shipyard, managed to cram some impressive tech into the available 1,600 GT. 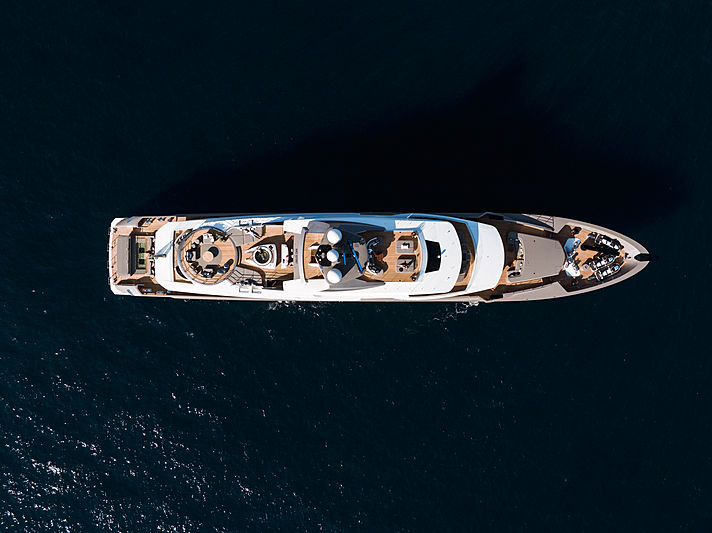 Photo: BlueiprodBased on the same 65-metre platform as Suerte, Paszkowksi was tasked with not only the lengthening of the design but also with the addition of new features that will carry a familiar Tankoa look while at the same time be distinctly unique. “I have to say that it wasn’t a huge effort because we were working with a concept that had been designed for eventual lengthening. The original 65-metres could potentially be lengthened to 70 or 75-metres, so adding 5-metres aft was very straightforward. But we redesigned her lines as well with a lot more curves in comparison to the verticals and ‘Anglo-Saxon’ feel of the original.” 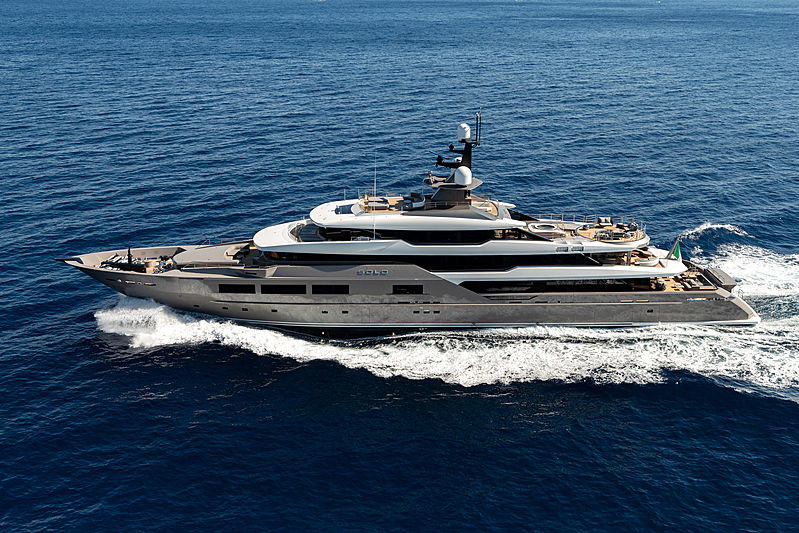 Photo: BlueiprodKnowing that Solo would have to endure the rigours of charter life and the demanding operations that go with it, Paszkowski had the particularly challenging task of not only incorporating the owner’s distinct requests into the design but also to ensure that Solo would be able to host larger charter groups with ease. “For charter, you have to take into account a whole series of functions that don’t matter so much when the owner wants to use it for private purposes alone. Ensuring seamless crew flow and comfort is paramount as is setting up a galley that can handle producing three meals per day each day of the season, for example. You end up with less room for imagination and have to focus on more practical solutions.” 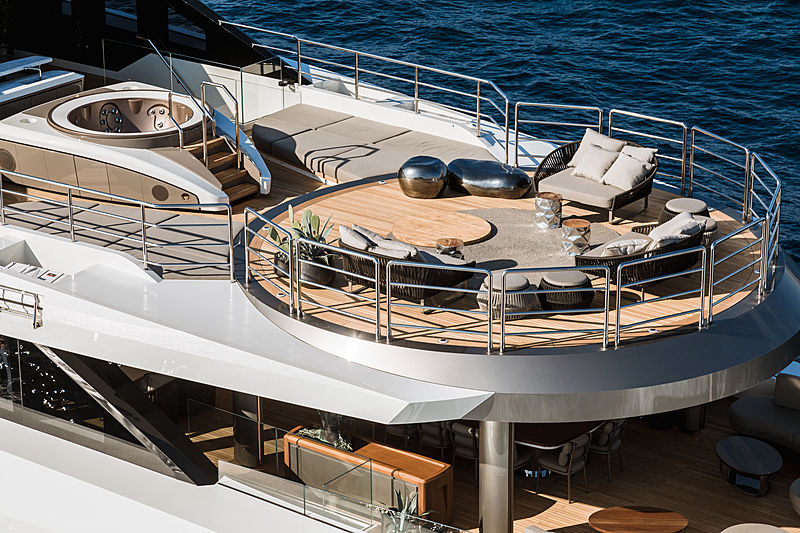 Photo: BlueiprodHaving said that, for Tankoa’s Sales and Marketing Director, Michele Karsenti who was involved in the project from day one, Solo embodies everything the brand stands for today and is yet another sign of the direction this ambitious company is heading in. “Not only is Solo an astonishing looking yacht, but she is also the most efficient yacht I’ve ever been on. From the total absence of vibration to her silence and performance, I am just thrilled and can’t wait to see the reaction of clients.”

Photo: BlueiprodGreen with envy
In the pursuit of making Solo as green as possible, instead of introducing less proven hybrid technology in the construction of the project, Tankoa decided to optimise conventional systems to have Solo emit fewer emissions and ultimately consume as little fuel as possible. Solo is so efficient that at a speed of 10 knots, she only burns 195 litres per hour with one generator running, giving her a range of 7,000 nm - enough to get from Monte Carlo to Cape Town without stopping. 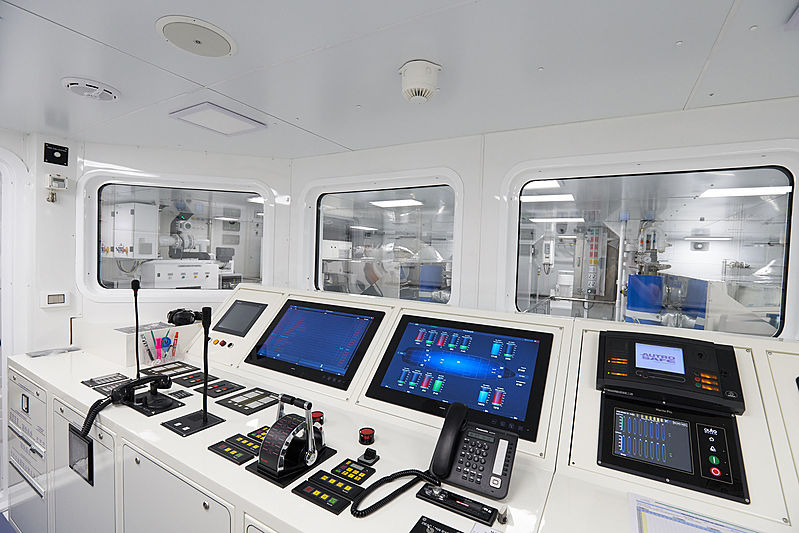 Photo: BlueiprodSpecial soot burners prevent those nasty black streaks on the hull and save guests from swimming in a cloud of smoke when at anchor, while a dedicated CO2 monitoring system indicates the most optimum speed range to the captain when cruising in order to keep emissions to a minimum. Tankoa delivered Solo with a complete Environmental Management Plan (EMP) that explains the operation of these systems and outlines what crew and guests can do while on board to decrease further the footprint size left on our oceans.  All of this means that Solo is the greenest Tankoa yacht in history, setting a new benchmark for the builder to improve on. 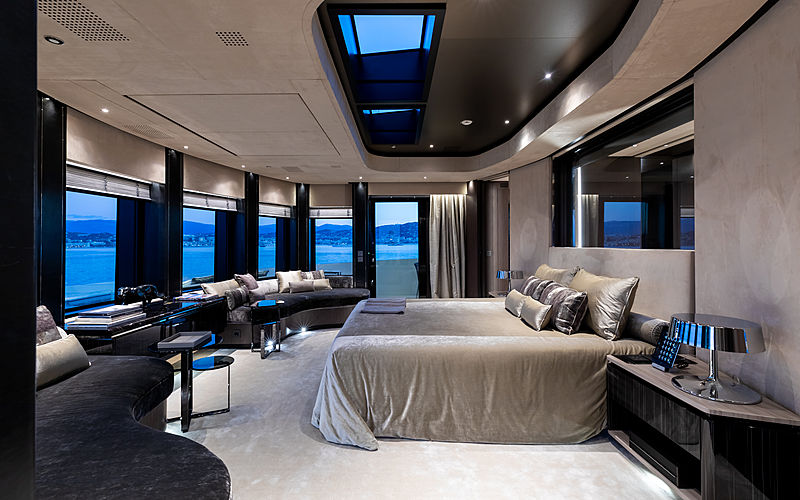 Photo: BlueiprodRoom with a view
Perched right at the top of the yacht is Solo’s enormous owner’s apartment that stretches from the private mosaic-tiled Jacuzzi and sun lounge area forward, all the way to the touch-and-go helipad aft with everything you could want on board in between. This area was initially destined to become the wheelhouse before Solo’s owner worked with Paszkowksi to create a real oasis dedicated to privacy and indulgence. Full height windows wrap around the sleeping quarters that is finished with rich materials such as velvet corner sofas and suede-like wall and ceiling fabric. A life-sized overhead skylight brings life to each detail in the room and creates a magical ambience under the moonlight. 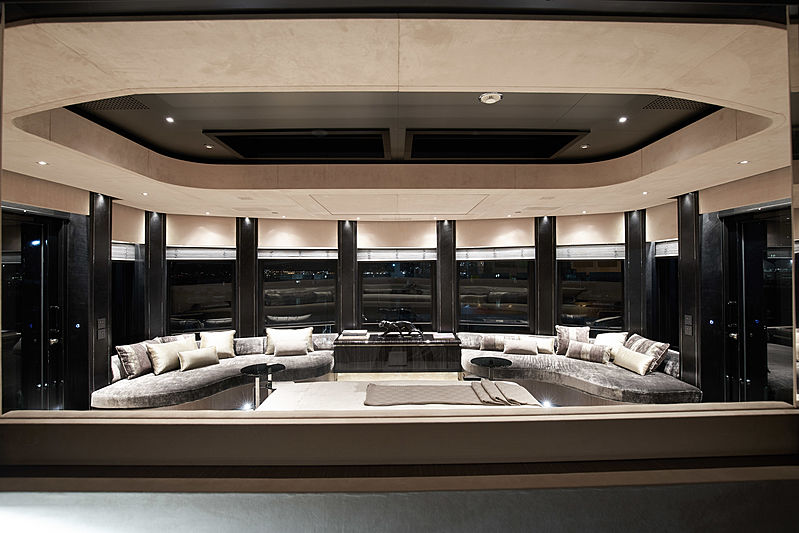 Photo: Blueiprod“The owners can access the side decks from the suite and has a dedicated Jacuzzi forward and a relaxation zone that is lower than the bulwarks to create a cosy niche.” In addition to the grand suite, the owner also has access to a private media and study room situated aft towards the helideck. A unique circular pool was built on the expansive outdoor aft deck upon request of the owner and serves as a central piece of art. 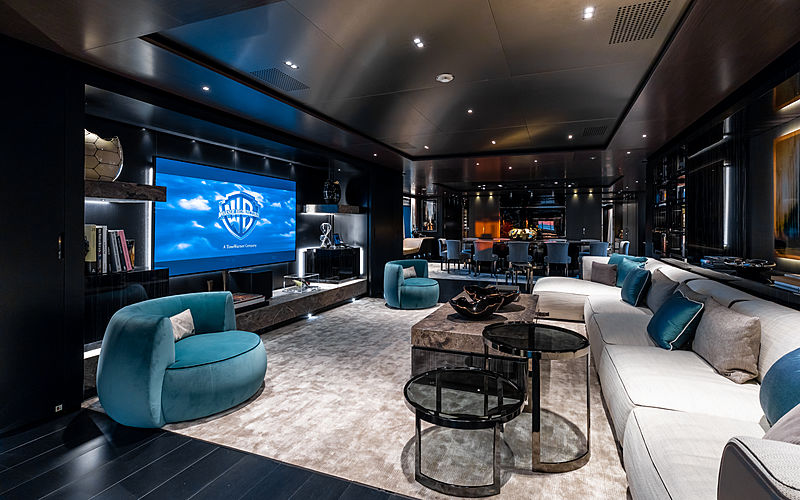 Photo: BlueiprodAll natural, naturally
Margherita Casprini was at the helm of the interior operation, and the designer worked closely with the yacht owner and the shipyard in order to accurately capture the desired effect of each guest area. The brief called for a hyper-modern style that would also be warm and inviting through the use of natural materials wherever possible. Casprini searched far and wide when having sourced materials for the interior. From sauna wood found in a medieval Finnish castle to wooden wall panels from a 300-year-old Norwegian farm; Tankoa is a blend of the past and the future. 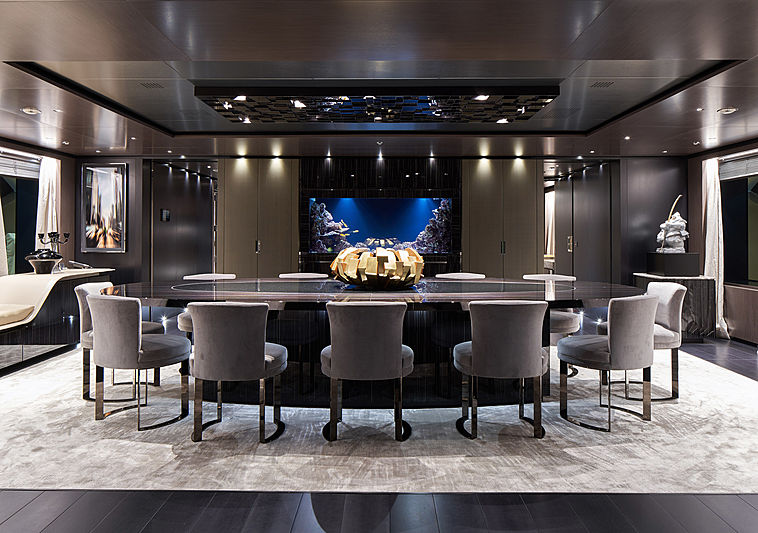 Photo: BlueiprodAll marble on board (apart from the select few Onyx pieces) has been given a satin finish for that timeless look as is most of the wooden surfaces that stand in stark contrast against the high-gloss Macassar ebony. The somewhat dark-toned interior has been injected with pops of vibrant colour through the use of creative artwork and pastel-shaded furnishings that can be found in all guest areas. Smart LED lighting help tone each area and sets a dramatic mood in spaces such as the main deck cinema room.

Photo: BlueiprodSeaside living
One of the highlights on board has got to be the water-level beach club at the very stern of the yacht. This area doubles as a daytime watersports centre as well as a stylish welcome area as guests are welcomed back on board after an afternoon’s shopping in St Barths. 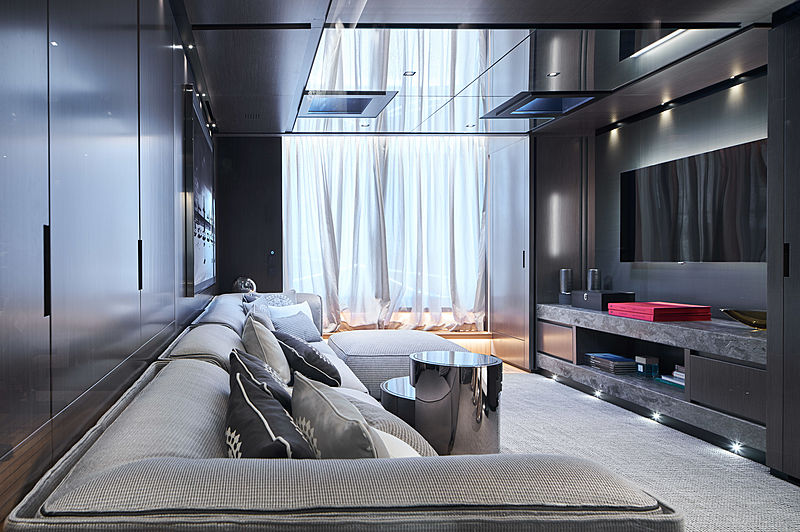 Photo: BlueiprodFrom the open swim platform, guests access the beach club’s lounge area through sleek sliding doors. This cool hideout made out of nearly all glass provides the perfect setting from where to keep an eye on what is happening out on the water and can easily be closed off from the outside world with blinds. Connected to the TV lounge and bar found in the beach club, guests also have access to the wellness centre that is on board just forward of this area. 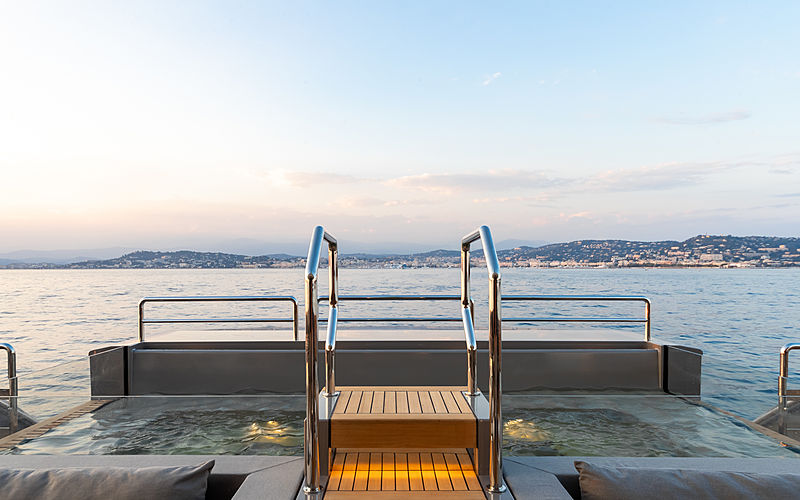 Photo: BlueiprodHere guests can workout in the glass-walled gym with its own fold-out balcony or relax in the spa zone with sauna and hammam (also with its private fold-out balcony). A special 5-degree-celsius chilled water shower provides added relief after those intense workouts on board. 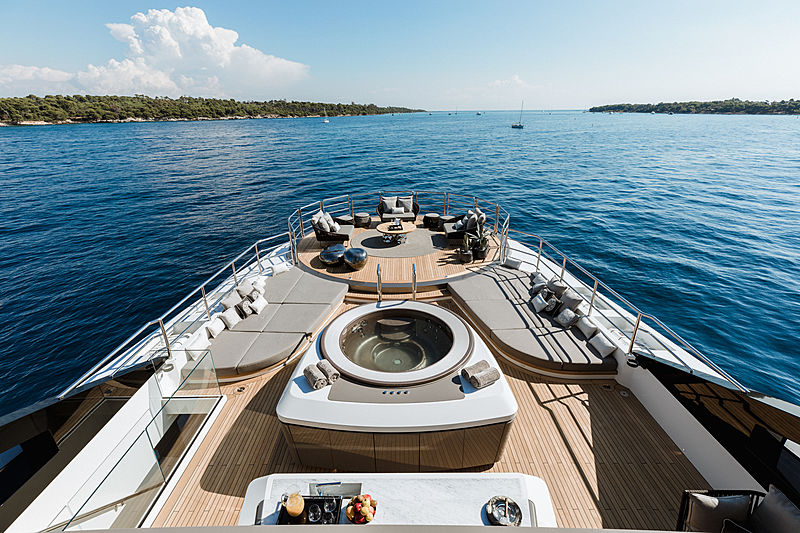