The 2012 Extreme Sailing Series™ global circuit will be announced on Tuesday, 13th December, just two days after the final Act of 2011 in Singapore and coinciding with the opening day of the World Yacht Racing Forum in Estoril, Portugal. The worldwide circuit will once again span several continents as it goes in to its sixth year, with its award-winning ‘stadium racing’ format continuing to bring the sport to the public, entertaining fans in established markets and introducing the sport in countries where professional sailing is very new. 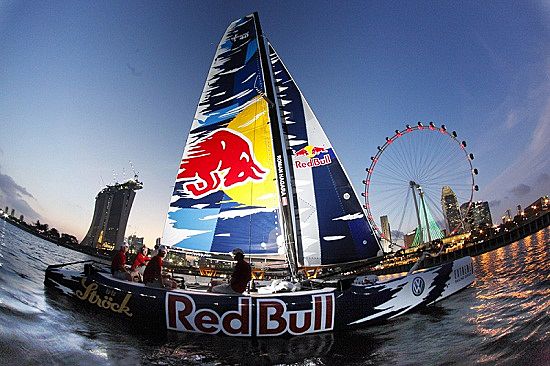 The skipper and crew line-ups for the 10 teams competing at the 9th and final Act of the 2011 Extreme Sailing Series circuit can be revealed today (see full list below). This includes Dean Barker back at the helm of Emirates Team New Zealand who lead the America’s Cup World Series Championship and is lying 3rd overall in the Extreme Sailing Series going into the final event, Alinghi skippered by Tanguy Cariou and helmed by Yann Guichard lying in 4th, 5thplaced The Wave, Muscat skippered by Leigh McMillan, Roman Hagara’s Red Bull Extreme Sailing lying in 6th, Oman Air with new skipper Chris Draper at the helm in 8th and the all-British crew led by Ian Williams, recently crowned ISAF World Match Race Tour champion, on Team GAC Pindar in 9th. Two new entries in the form of Stéphane Kandler’s, SOITEC and the first club™, named Team Extreme – the first club™, headed by skipper Sébastien Col, and Team TILT, the Swiss-French squad that will also re-join the fleet after their first participation in Almería, with Swiss multihull lake sailor Alex Schneiter as skipper. 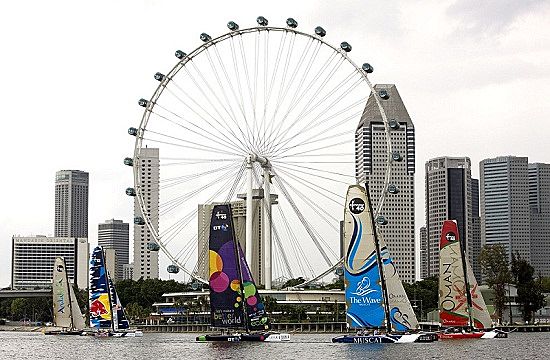 At the top of the 2011 leaderboard, the Italian team of Luna Rossa is leading the Overall Championship, but only one point ahead of the French team Groupe Edmond de Rothschild. “The Luna Rossa team is really excited about heading to Singapore and the final event of the season,” said Luna Rossa helmsman Paul Campbell-James. “We’re going to have a great battle with Gitana. We’re guaranteed a top two result in the overall season results so it’s going to be literally a five-day match race – Italy versus France for the title. Alister [Richardson] and I were in exactly the same position against Gitana this time last year and we’re hoping for a similar winning result!” [Note: Paul Campbell-James was skipper of the 2010 overall champions on board The Wave, Muscat beating Groupe Edmond de Rothschild then skippered by Yann Guichard.] Whilst these two teams will fight out for the overall victory, four teams can still claim the 3rd spot on the podium. As ever, its expected to go down to the wire.

The action will begin on the 7th December on Marina Bay, under the iconic backdrop of the Singapore Flyer, also home to F1’s Grand Prix pitlanes, with the Extreme Race Village opening to the public from the 9th-11th. The on-water action will be complemented by the NeilPryde Racing Series, following its debut on the Extreme circuit in Nice, which will see 20 of the best professional and amateur windsurfers from Singapore, Malaysia and Indonesia. Click here to find out all the latest info on the Singapore event including activities on and off the water and timings.