With the Mangusta Gransport 54 El Leon, the first in a new range of aluminium fast cruisers that debuted at the 2018 Monaco Yacht Show, the Italian brand takes a holistic look at performance by focusing not just on high speed, but also comfort, fuel efficiency and long range. 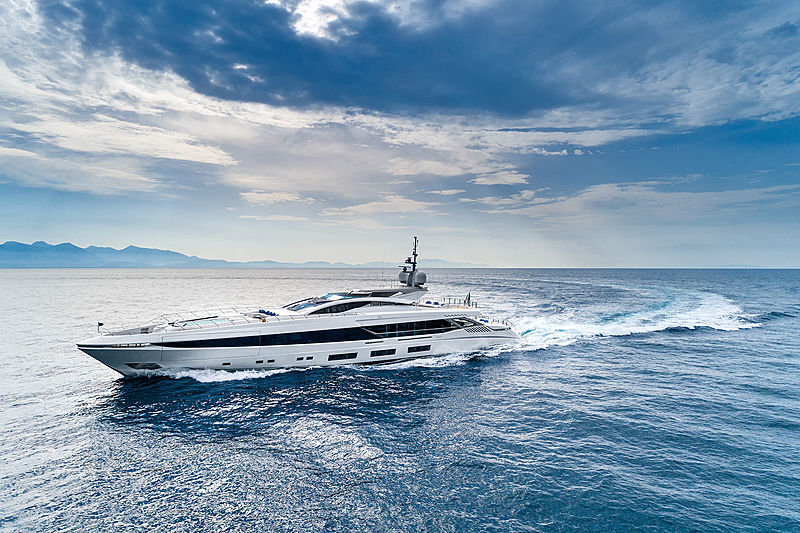 Mangusta is renowned for its stable of high-speed Open Maxi yachts based on fibreglass planing hulls. In the past, these relied on powerful engines coupled with water jets. But market expectations are evolving and following up on the displacement Mangusta Oceano 43, the Mangusta Gransport 54 takes a different tack and draws on advances in efficiency throughout the range. We talk with Francesco Frediani, Overmarine’s Commercial Director, and Chief Engineer Nicola Onori, about the R&D that went into the technical design of the fast displacement yacht.

Can you talk us through how you began work on the concept for the Mangusta Gransport 54?

Frediani: The concept began with a series of specific performance parameters. The top requirement was to create a yacht over 50 metres in length that could reach a top speed of least 30 knots, but was also capable of efficient cruising at low speed. We began a series of in-depth studies to research how best to achieve this target, and together with Pierluigi Ausonio of PLANA Design came up with what we call the Fast Surface Piercing Hull, or FSPH. Without giving too much away, this is basically a round-bilge hull form with bulbous bow hull that cuts through the sea surface without planing. Optimised through CFD calculations and tank testing, the hull design allows for a top speed in excess of 30 knots and cruising speeds above 25 knots with relatively low installed power. But in combination with a fuel capacity of some 63,000 litres, it also provides a transatlantic range of 4,800 nautical miles at 12 knots and 3,500nm at 14 knots, which is unusual for any motor yacht. In fact, the owner of El Leon, his fourth Mangusta, is planning on taking her across the Atlantic this winter. 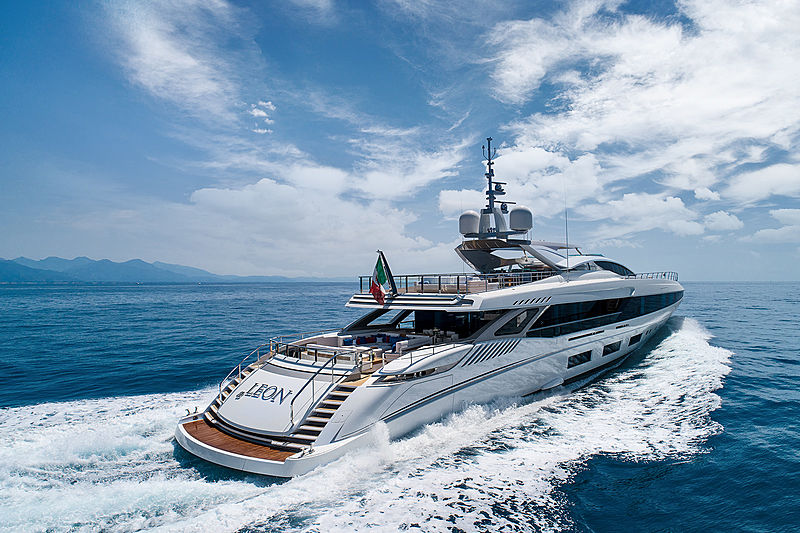 Why the decision to install four engines with shaft-driven propellers instead of the engine/waterjet combination we’ve come to expect from Mangusta?

Frediani: This is something we’re often asked. Water jets are less efficient at low or even medium cruising speeds than conventional shafts, so were discounted early on. The four-engine configuration is a solution widely used in military applications, especially for patrol boats that spend long periods cruising at low speed, but also need the power to reach high speeds quickly. We’ve been installing four engines on the Mangusta 165 since 2016 with a marginal loss in terms of performance – she’s still one of the fastest yachts in her size category on the market – and better fuel efficiency, so it was a natural decision to do the same on the Mangusta Gransport 54.

Onori: It all boils down to power/weight ratio. To build high-speed yachts, you want light but powerful engines. Lighter yachts also mean more speed for less fuel, which in turn means lower emissions. On the Mangusta 165 we used to install three MTU 4000 series engines that delivered 3,440kW each. These units weren’t originally intended for pleasure yachts, and at around 13 tonnes with their gearboxes, they were big and heavy. The latest generation MTU 2000 series, on the other hand, was specifically designed for use on yachts. They produce 1,939kW each but weigh less than half as much, so we’re already saving a lot of weight. They’re also more efficient: at 30 knots the 4000 units burned 2,700 litres of fuel an hour, compared with 1,290 litres for the 2000 series. In combination with the FSPH, we believe we’re at least 15 per cent more efficient than our competitors. Moreover, four engines provide more redundancy and the yacht can run on three or even two engines in an emergency.

Do four engines and their gearboxes require a bigger engine room?

Frediani: Not at all. We drew on our prior experience with the Mangusta 165 to develop an engine room layout with easy access to machinery for maintenance, and as the 2000 series units are more compact we actually have more space in the engine room. Because they are also lighter, we were able to shift the centre of gravity further forward to balance the weight distribution and remove the need ballast tanks, which are governed by more complex regulations. Humphree interceptors allow the trim to be fine-tuned.

What other technical criteria did you take into account when developing the project?

Onori: Low draft for shoal-water cruising, which is a feature of the FSPH, and comfort in terms of noise and vibration. Having four propellers means the power is more evenly distributed and helps to smooth out vibrations. But more propellers can potentially mean more cavitation, so a lot of care was taken to design low-wake seawater intakes and exhaust outlets that don’t interfere with the flow around the props, which are mounted on single shaft struts. The insulation package was a separate area of research and we developed a 3D model of the entire vessel using statistical energy analysis (SEA). A global Finite Element model was also produced to capture both high and low frequencies. Preliminary noise levels at 20 knots recorded just 55 decibels in the owner’s suite and 53 decibels in the main salon. 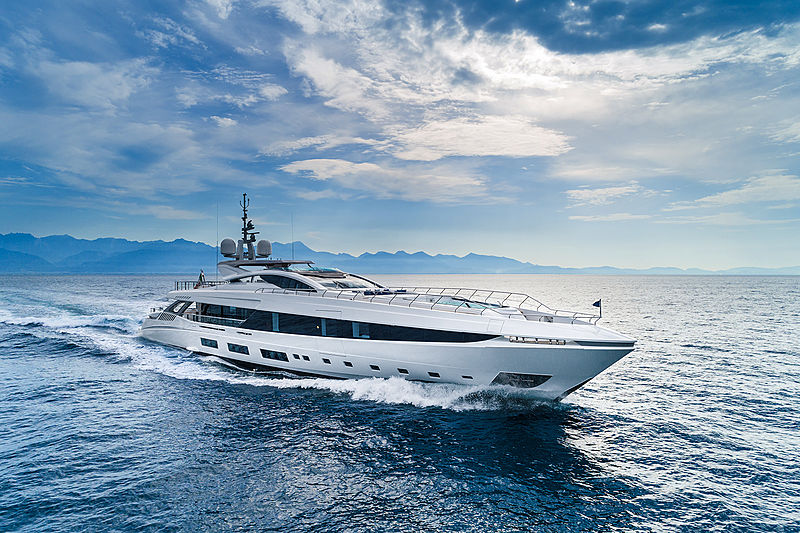 Frediani: In terms of overall performance, engineering and quality, the Mangusta Gransport 54 matches our mission to be the benchmark in today’s market for high-speed yachts that are also efficient and comfortable. The technical lessons learned from this first example will definitely influence our future production, starting with the recently sold Mangusta Gransport 45 that is in build. Based on the FSPH, her propulsion package comprises three MTU 2000 engines: two are connected to the fixed-pitch propeller shafts and the central unit is coupled to a Rolls Royce KaMeWa water jet. This flexible combination provides a top speed of 26 knots and a range of 3,500 nautical miles at 11 knots, or over 1,000 miles at 20 knots. In addition, the central water jet offers quiet nighttime cruising and superior manoeuvrability.