The Tecnomar for Lamborghini 63 (the 63 is a reference to the yacht’s length in feet and the date Lamborghini was founded) is not the first collaboration between a prestige automotive brand and a luxury boat builder. Aston Martin, Mercedes and Lexus have already been there, but the most to come out of these projects was a one-off prototype. From what we saw during an invitation-only event at The Italian Sea Group headquarters in Tuscany introducing the first 63-foot hull to hit the water, it looks as though Tecnomar and Lamborghini have hit the nail on the head. 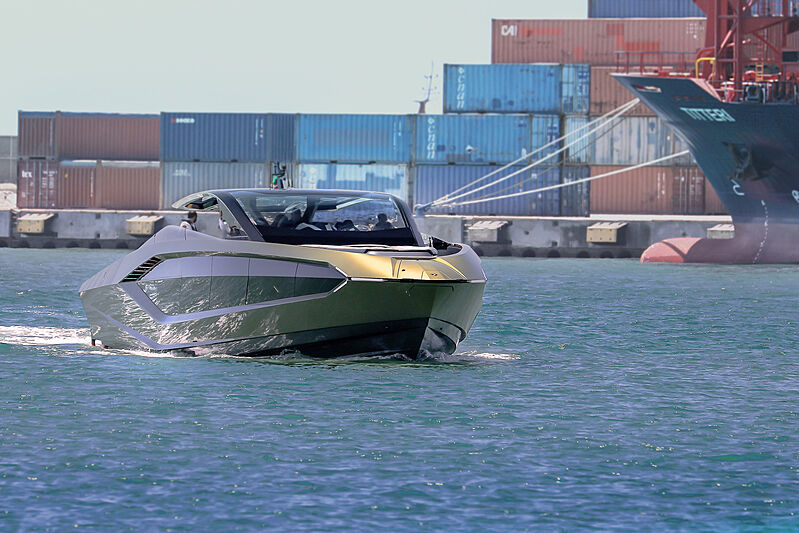 News that Tecnomar was partnering with the Raging Bull badge on a high-speed motor yacht came in 2020. Lamborghini has long supplied marine engines for offshore powerboat racing, but the luxury yacht market represented new territory and it entered into the agreement only after an exhaustive feasibility study from a strategic and business point of view. 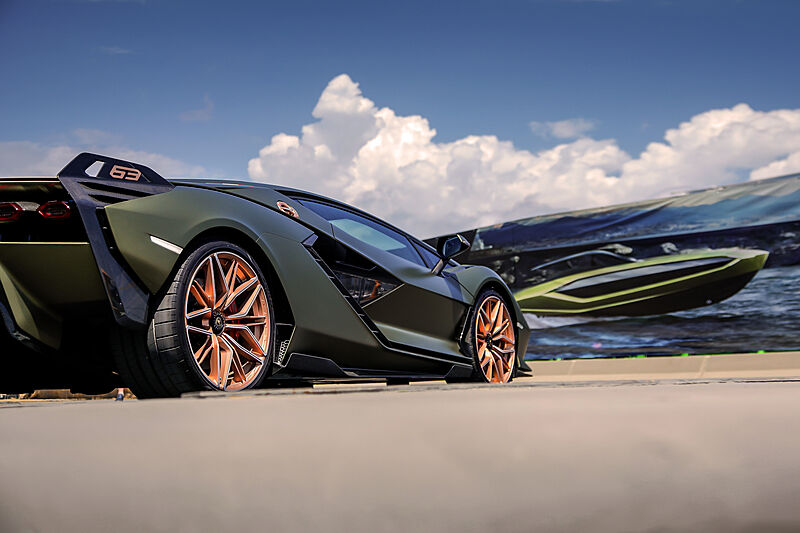 “The most important thing was that we didn’t want to create a generic homage to the marque, but a real boat that incorporated all the brand’s values,” says Stefano Rutigliano, strategy director for Lamborghini. “So we evaluated the business case, made a presentation to our board and then proceeded to the design study under the technical supervision of Tecnomar in order to transfer as much as possible of the spirit of Lambo to the boat. I believe we’ve succeeded much more than in previous collaborations of this kind.” 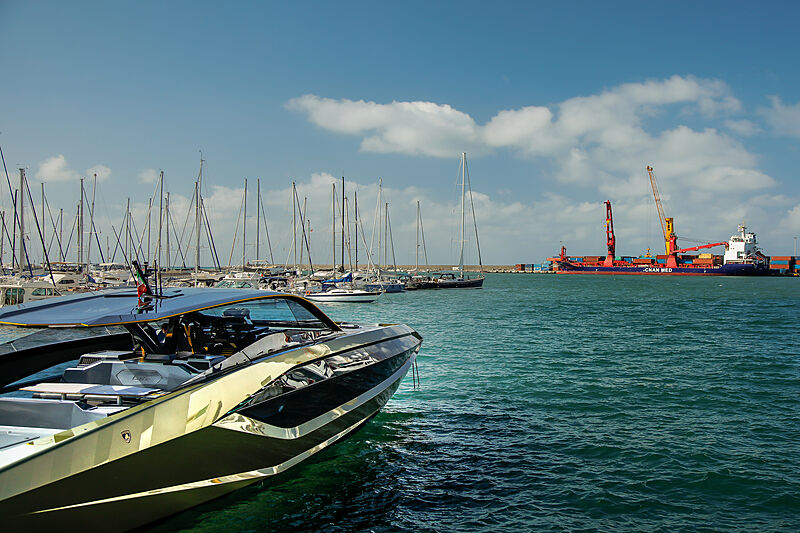 The ferocious exterior design of the Tecnomar for Lamborghini 63 is inspired by the new hybrid-powered Siàn FKP 37 and even the verde gea livery of the first unit is the same as the super car, but the distinctive hexagonal geometry of the hull and superstructure goes back much further to the iconic Lamborghini Countach. Other design details replicate signature features from current models. The leather pilot seats with Sparco racing seatbelts, for example, are those in the Huracan Evo, and the helm is a modified version of the Aventador’s steering wheel (minus the paddle shifts and air bag). 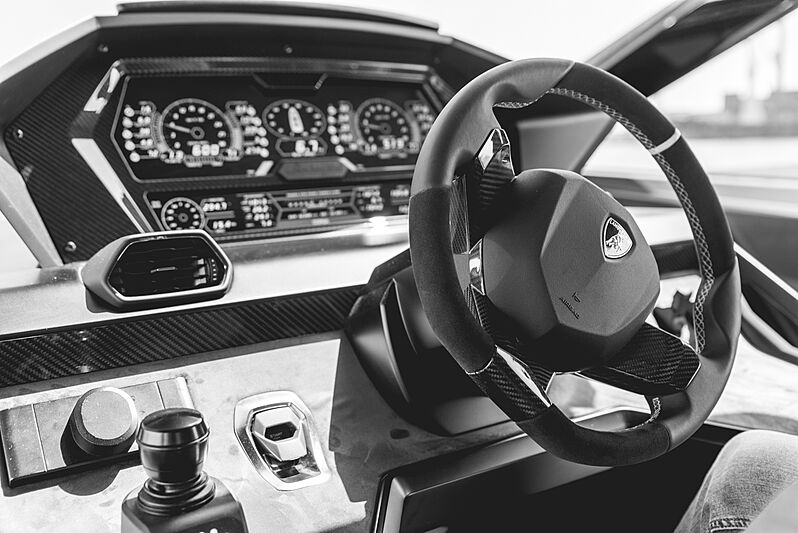 “The first time we visited The Italian Sea Group shipyard we were impressed by the entrance lobby full of modern art, which is more like a gallery than a shipyard,” says Mitja Borkert, director of Lamborghini’s Centro Stile. “Then they came to our headquarters in Sant’ Agata Bolognese and I showed them my world and our design DNA. From the start, the relationship between us was very open and the ideas started to flow very quickly. The chemistry of the design team is always important; it’s not a given that you will get on well, but when you do it becomes an adventure.” 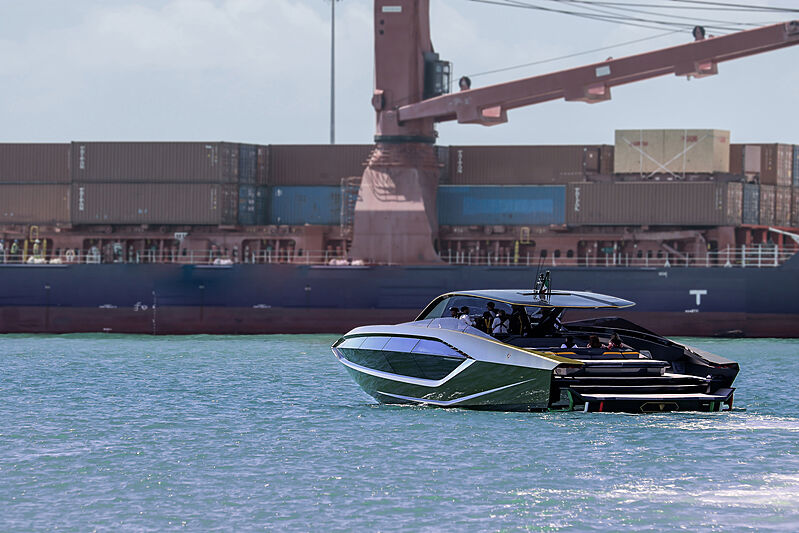 Designed for fast day trips or weekend cruises with family or friends, behind the helm position is a dinette and galley station, pop-up TV and sunpad, with another sunpad on the foredeck. The accommodation below deck comprises a spacious master suite forward and a guest cabin with twin single beds and a shared bathroom. The upholstery is in automotive-inspired grey and yellow leather coupled with sporty carbon-look trim. Even the skylight above the master cabin is shaped like the Raging Bull badge. However, part of Tecnomar’s role throughout the design process was to maintain a strong focus on usability and livability. 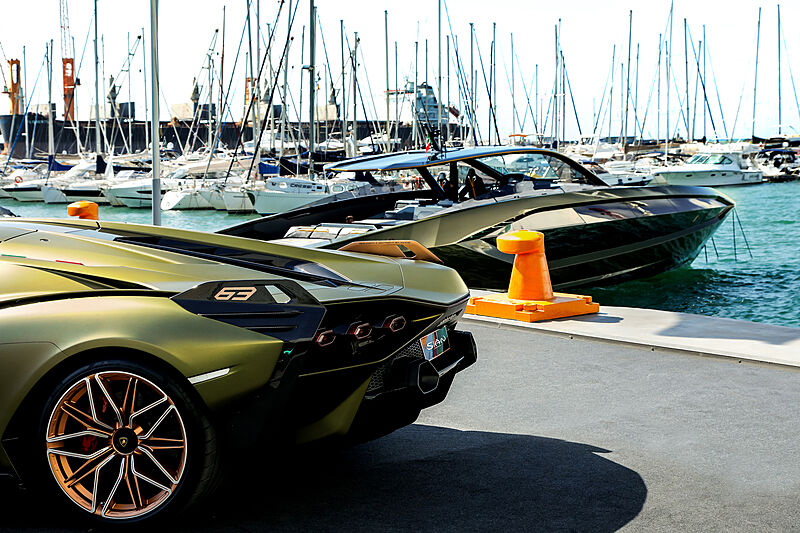 ”One of the biggest challenges was maintaining a very low profile like the sports cars, because on a yacht you need a certain head room for comfort,” says Gian Marco Campanino, art director at The Italian Sea Group. “It was a balance between making everything as light and sleek as possible, but also robust and vibration free.” 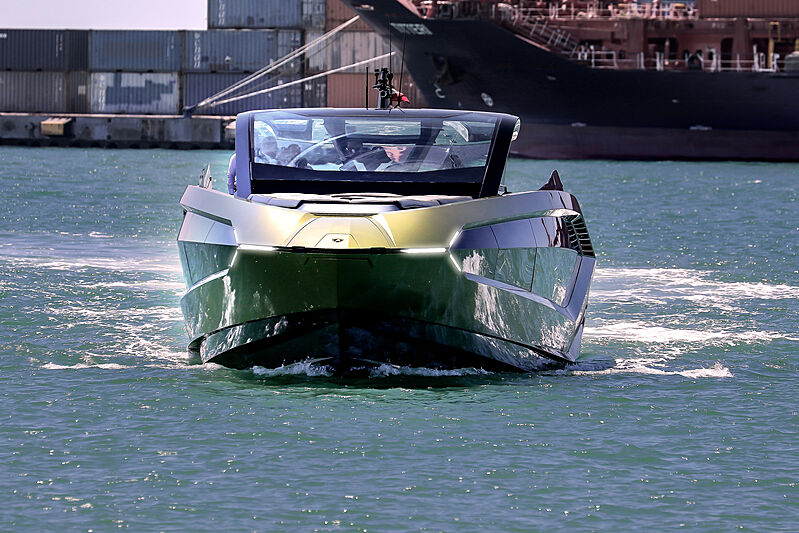 The pair of MAN V12 diesels of 2,000 hp each under the aft sunpad make a very different sound to the high-pitched wail of a Lamborghini 12V petrol engine, but the feeling cocooned in the cockpit is much the same as even the dashboard graphics and aviation-style cover on the start/stop buttons are the same as the super cars. 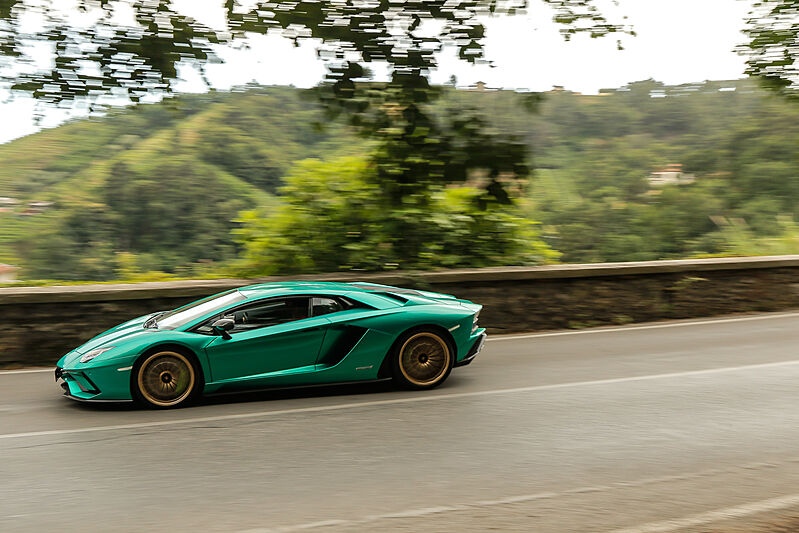 “When you drive a Lamborghini you feel fully integrated into the experience like a fighter pilot,” says Borkert. “We wanted to achieve the same feeling in the yacht and the emotion you feel inside the cockpit is the same as in the cars.” 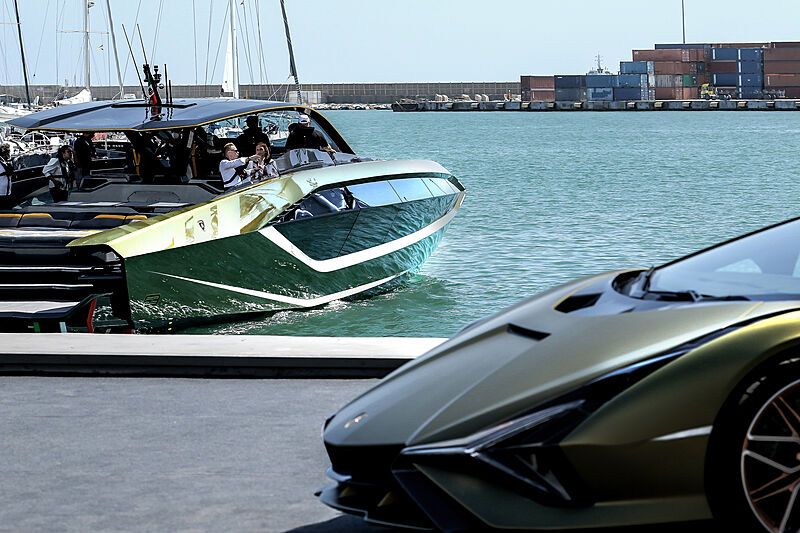 Coupled with the GRP hull by Tecnomar’s in-house technical team and carbon fibre superstructure to keep the weight down and centre of gravity low, the combined 4,000 hp propel the yacht at a top speed in excess of 60 knots, making the 63-footer easily one of the fastest yachts in her class. Fuel consumption is around 400 litres of fuel per hour at a cruising speed of 40-45 knots for a range of approximately 360 nautical miles. 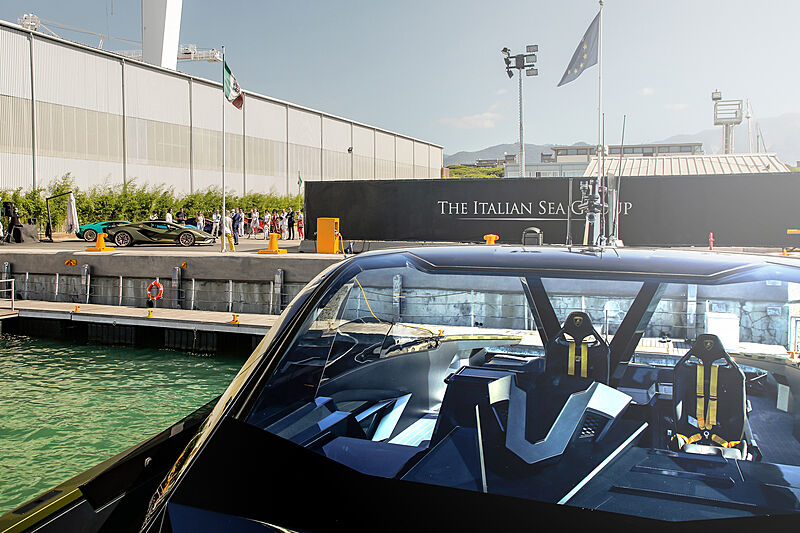 The conditions were not ideal for a sea trial with a 20-knot breeze kicking up some white caps. Nevertheless, the Tecnomar for Lamborghini 63 ran at well over 50 knots with no slamming and minimal vibration, thanks in part to the hull form that rides on a cushion of air at planing speeds. But perhaps the biggest surprise given the sea state was how dry the boat is and there was hardly a drop of seawater on the windscreen when we tied up again at the dock. 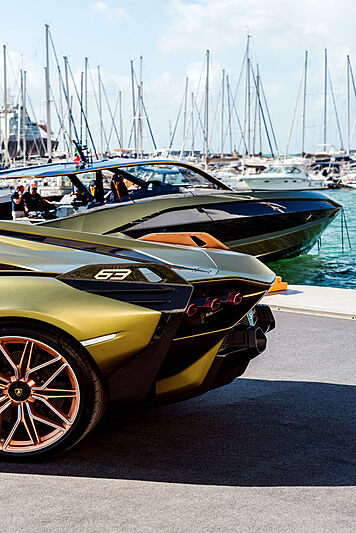 The Italian Sea Group is reluctant to say exactly how many units have been sold to date, but it did confirm that build slots through 2022 are fully booked up. Clearly the Tecnomar for Lamborghini 63 is aimed at Lamborghini’s international clientele, but with up to 8,000 new Lamborghini cars sold each year there is no shortage of potential customers for such a niche luxury product. 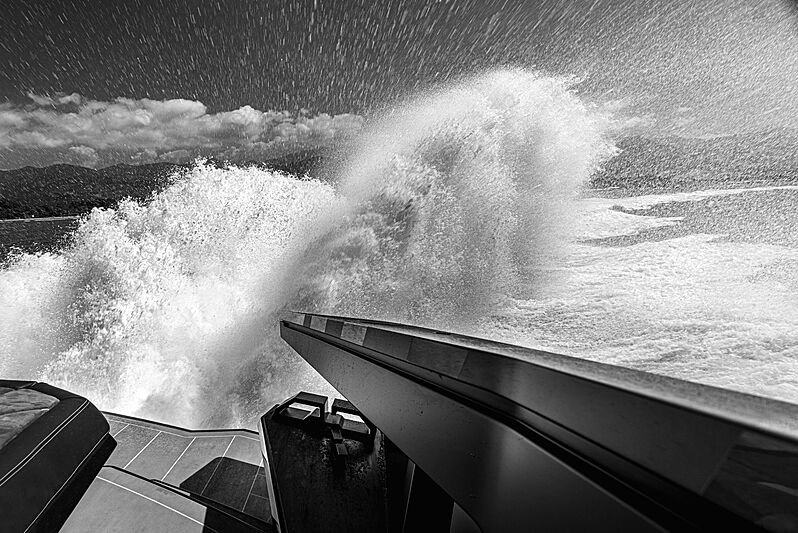 “The great thing we have is our design language,” says Mitja Borkert. “Lamborghini is something you have in your heart – it’s a lifestyle and a universe. You can have the same spirit in your car, your home, your furniture and now in your yacht.”