Designed by Luca Dini, Italian shipyard Cantiere Navale Italia has announced that the inaugural 13 metre all aluminium Baby is now completely assembled, with painting and fitting out underway. Two of the yachts have been sold already, with a third contracting. She will accommodate up to 12 guests on board. 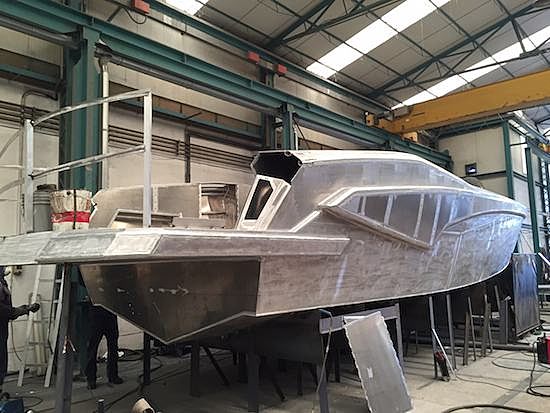 Speaking of the imminent launch as well as the design of the vessel, Cantiere Navale Italia state, “We are impatiently awaiting the debut of this new jewel of the sea, completely made in Italy. Her elegant characteristics include the streamlining of all protrusions that leave her unencumbered with accessories that disturb her lines".

“The controls on the bridge are completely new. Developed by the technical office of the Cantiere Navale Italia in collaboration with Naviop, the instruments are state of the art and set in a smooth single block, with only the wheel emerging. It will also be equipped with the best safety systems to deal with any problem arising at sea, allowing the owner to always have control of the vessel even in dangerous situations.”

Construction has now begun on the second unit of the Baby range. Hull number one is set to launched in early July and will make her world premiere at the Cannes Yachting Festival in September.