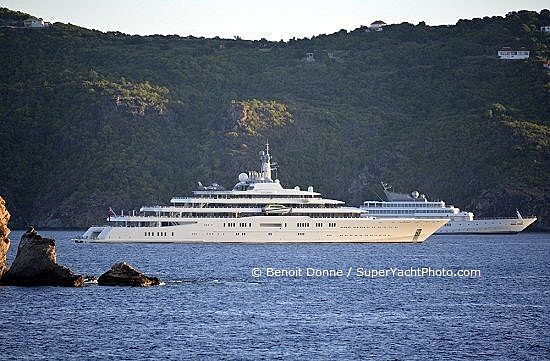 Until last week, superyacht Eclipse held the title of being the world's largest yacht. Since the launch of Azzam on friday, she now holds the second place. The owner of Eclipse also owns two other large yachts, Sussurro, and Luna. Eclipse can accommodate up to 36 guests, and a crew of 100. Some of her features include a swimming pool on the main deck aft, covered by a glass ceiling, and a log burning fire table on the upper aft deck. At anchor just behind her is the 138 metre Rising Sun. Rising Sun was delivered in 2004 and was one of the last creations of superyacht design legend Jon Bannenberg. She was built for an experienced owner, Larry Ellison, who now owns the 88 metre Musashi, a simular looking yacht, built at Feadship in 2011. Four MTU diesel engines and quadruple screw propel the yacht up to an impressive speed of 28 knots.