As 2011 draws to a close, having been a particularly busy year in terms of results and international events with the 10th edition of Monaco Classic Week, HSH Prince Albert II, President of the Yacht Club de Monaco paid tribute to the club’s sailors at the 2011 YCM Awards with the Trophée Credit Suisse. 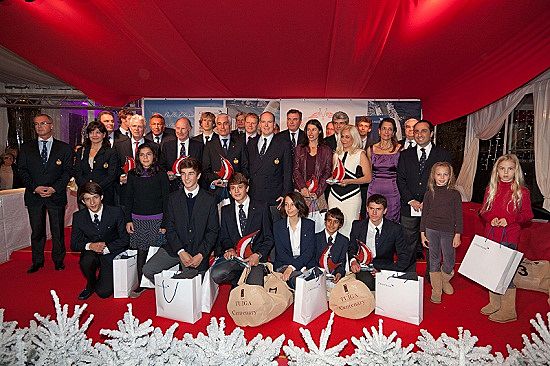 The YCM Youth Awards 2011, which enco urage the club’s young talents, were an opportunity to highlight the achievements of Téo Jonah Richardson (Optimist), Juan-Alberto Casalone (Laser) and Mathieu Bouchet (470). A special prize was awarded to the entire Optimist team, comprising Nicolas Bouchet, Lucie Chailan, Alex Minder, Edward Albert-Davie recognised for their victory at the Monaco Team Race, where they finished ahead of the race favourites. A highlight of the YCM Awards is the Trophée Credit Suisse for the society member who has best defended the Club’s colours throughout the year.

Presented by Alain Ucari, CEO of Credit Suisse (Monaco) this year it was won by Guido Miani for his victory in the Melges 20 European Championships held in October in Venice (Italy). Other nominations for the prize included other prestigious boat owners, namely Lord Irvine Laidlaw (Highland Fling), Andres Soriano (Alegre), Elena Ambrosiadou (Maltese Falcon) and Jean Rodelato and Blandine Medecin, winners of the first Mediterranean leg of the Transquadra.

Also announced was the ranking for the J24 Monaco Championship that runs throughout the year on Monegasque waters, and deserved recognition for Prince Charles de Bourbon-Siciles, who has led the International Smeralda 888 Championship for the last five years, of which he is also the president.

In his speech HSH Prince Albert II wished to share his vision to continue opening the Yacht Club to the international scene: “In an unpredictable world that is constantly changing, it is only by pursuing our goal to open up to the outside world that we will be able to consolidate our position. Be it because of its history, its appeal to so many superyacht owners or its concentration of yacht industry professionals, the Principality has many assets and real legitimacy. The success of ‘La Belle Classe by the Yacht Club de Monaco’, which unites owners and industry players around essential values, including preservation of our maritime environment, is very encouraging and promising for the future. Together we must maintain and develop our leadership, both in the world of competitive sailing by training our youngsters and in the classic yacht and luxury yachting domains, thereby confirming our status as the Capital of Yachting!”

The President of the Yacht Club also paid tribute to the Team Monaco initiative to create a ‘Sailing Academy’ to support and train a new generation of competitive sailors through an educational programme, thereby further reinforcing Monaco’s position as a centre of excellence for top-level competition. The next sports event at the YCM is the Monaco Optimist Team Racing (20-22 January) regatta, following a training camp (18-19 January), and of course not forgetting the 28th edition of the Primo Cup – Trophée Credit Suisse (3-5 and 10-12 February 2011).