The 2014 Global Superyacht Forum (GSF) kicked off yesterday for its 20th anniversary edition with over 400 participants in attendance. The forum was inaugurated by Chairman Martin Redmayne, who started with a presentation focused on visions in regards to the 20th anniversary and the year, 2020. 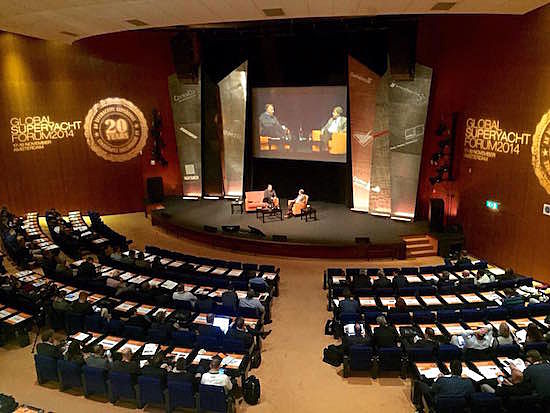 The area of service in the industry was particularly emphasised by the Chairman, stating this as something that will have no choice but to alter. He continued, "We must evolve to become a service based industry delivering the best service at the best value. We have lots of problems and we have to be able to stand up and discuss them openly. Let's use the next three days to clarify the industry's vision."

Redmayne continued to look at the growth of the fleet of superyachts. He presented the number of yachts in 1995 above 30 metres that were on the water as 1,841. Today, there are 4,973 - a substantial increase in just under 20 years. This significant rise in superyachts can be understood more clearly when considering that in 1995, there were just 365 billionaires in the world. Predictions made by Forbes indicate that by the year 2020, there will be 2,500 people in the world identified as billionaires. With these staggering figures, clearly the pool of potential superyacht clients will do nothing but increase. Exploring the new generations of superyacht owners, Redmayne states that it is important for the industry to realise that, “Financial control is more frequently at the forefront of owners' minds.”

After raising the key points that the Global Superyacht Forum intends to address over the next few days, Redmayne concluded by encouraging the attendees to utilise the event as a way to develop a united industry.