With her clean-cut exterior lines and contemporary-classic interior design by Luca Dini, the Columbus 50-metre Sport K2 carries on from where the original Columbus 40-metre Sport designed by Hydro Tec's Sergio Cutolo left off. In fact, it comes as no surprise that the American owner of K2 upgraded from the 40-metre model. SuperYacht Times went aboard the new yacht in Ancona just prior to her delivery. 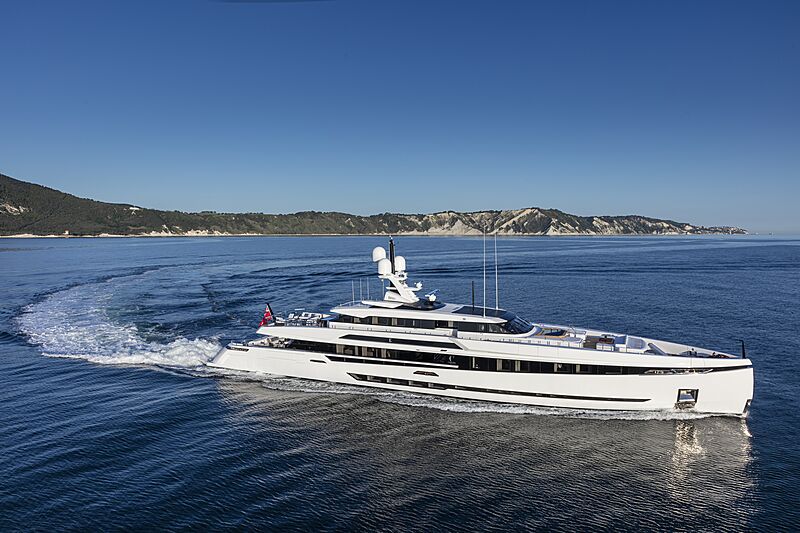 "The point of departure was a profound restyling exercise to bring the 40-metre version up to date while preserving its sporty, coupé look,” says Luca Dini. “The new yacht mirrors the personality, style and approach to life of its owner: elegant, refined, attentive and demanding, but also sporty, well-travelled and open-minded.” 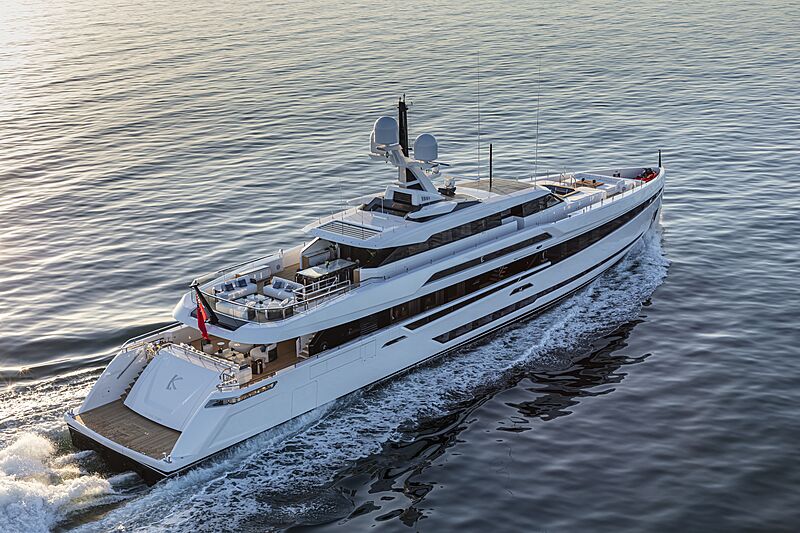 Dini’s exterior lines are aggressively streamlined and the scimitar-shaped bow adds muscle to the low-rise profile. Hydro Tec developed the semi-displacement hull lines with pronounced hard chine to ensure stability and motion comfort for guests in a seaway. Another requirement was transatlantic range and reduced draft (2.20 metres) for shallow water cruising in the Bahamas. 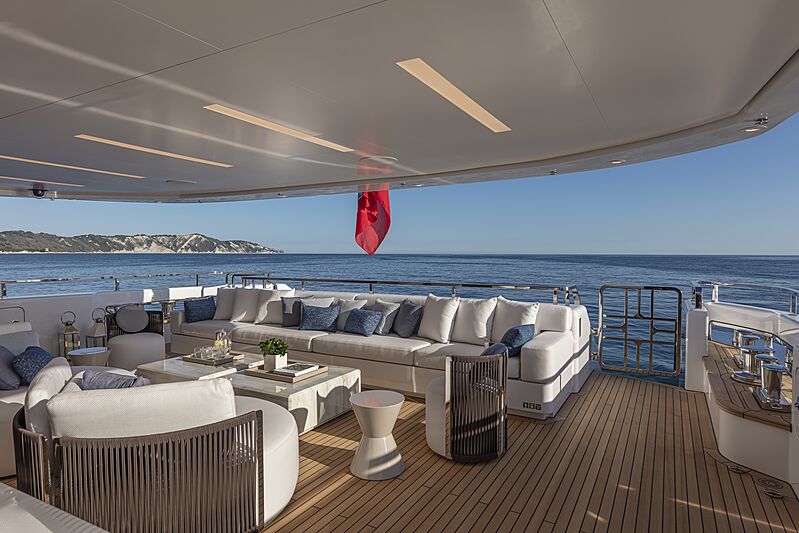 “The technical brief called for optimisation of the entire resistance curve, both at maximum contractual speed and at lower speeds,” says Sergio Cutolo of Hydro Tec. "Actually, the performance analysis at lower speeds has provided particularly interesting results, with a consumption of about 70 litres per hour at 10 knots that is a particularly good result considering the hull characteristics.” 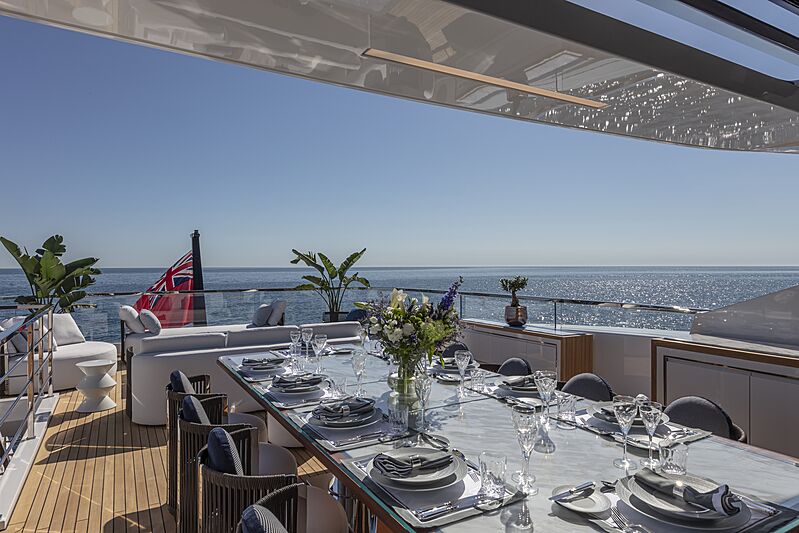 The Columbus 50-metre Sport is available in two versions: with or without a sundeck. K2’s owner chose the latter that shows off to best advantage the powerful profile. The exterior layout is relatively conventional with al fresco dining on both the main and upper decks – the latter partly shaded by a louvred hardtop – and a hot tub and sun loungers on the foredeck. Worthy of note are the wide walkways on the upper deck – a specific preference of the owner who wanted to be able to move easily between open-air social areas fore and aft. There is room in the forepeak for a rescue tender and Seadoo, whereas e 6.5-metre Castoldi is housed in a side-loading garage in the stern between the transom beach club and the engine room.The guest accommodation comprises a full-beam master stateroom on the main deck forward and four ensuite cabins on the lower deck. Unusually, the young owner requested a full-sized gym, equipped in consultation with a fitness specialist in New York, in a space adjacent to his own suite that would normally accommodate another guest cabin. 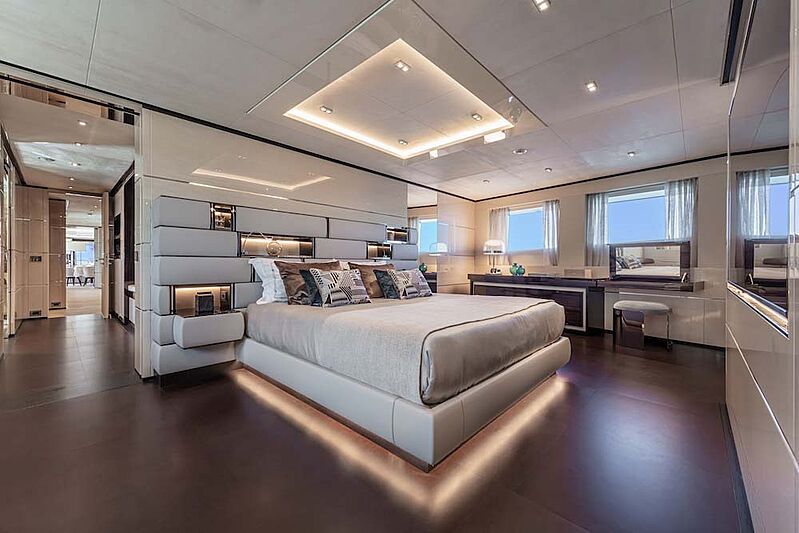 K2 will be available for charter and the bright, clean and coherent interior design has a classic edge designed to appeal to most tastes.  The principle woods are pale sycamore and Tanganyika Frisè that provide a contrasting light and dark background to the palette of neutral soft furnishings and leather upholstery. 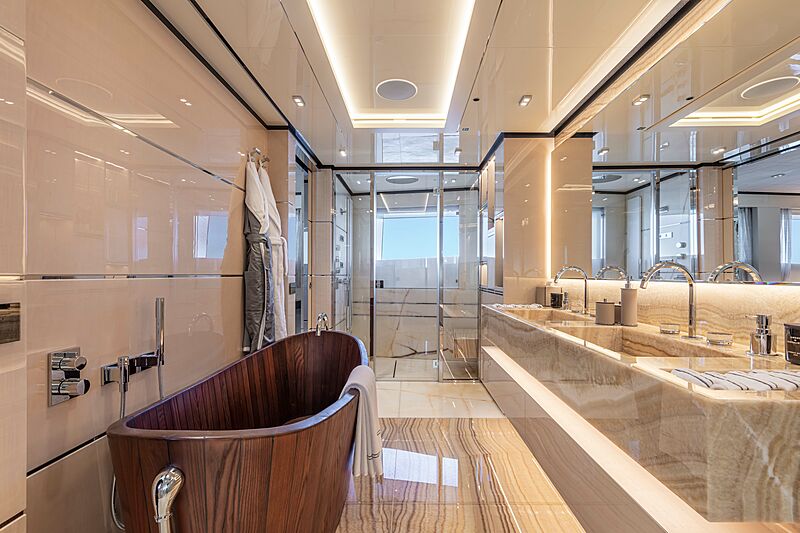 “The overall effect is sober and simple, but on closer inspection there is a wide range of materials and finishes that add detail and richness,” says Dini. 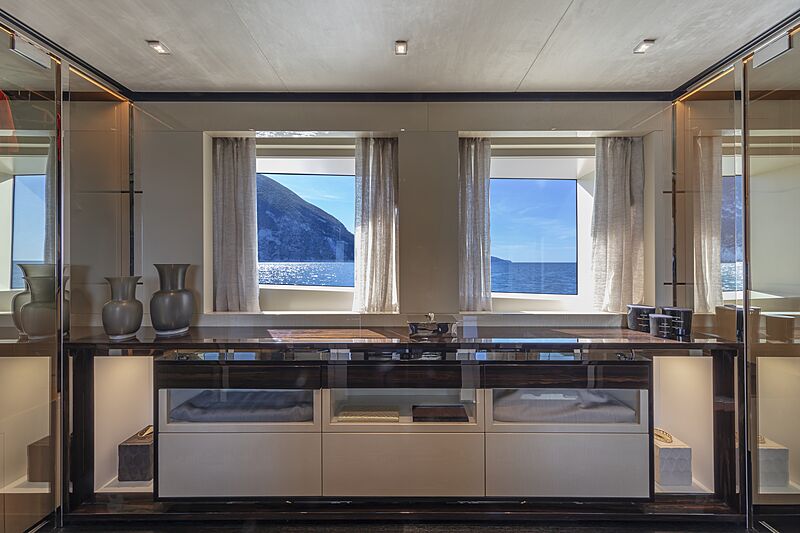 The marble varieties on board include cappuccino-coloured onyx, alabaster, white Lasa for the soles and a bold white marble with grey veining for the wet surfaces in the guest bathrooms. The owner’s bathroom features a wood bathtub made to measure in white ash. The wood is thermally processed at 215°C for water-resistance and durability with custom-designed rubber seals to prevent water loss when the wood naturally expands or contracts. Finally, the planks are fitted together by hand using two hidden cables. 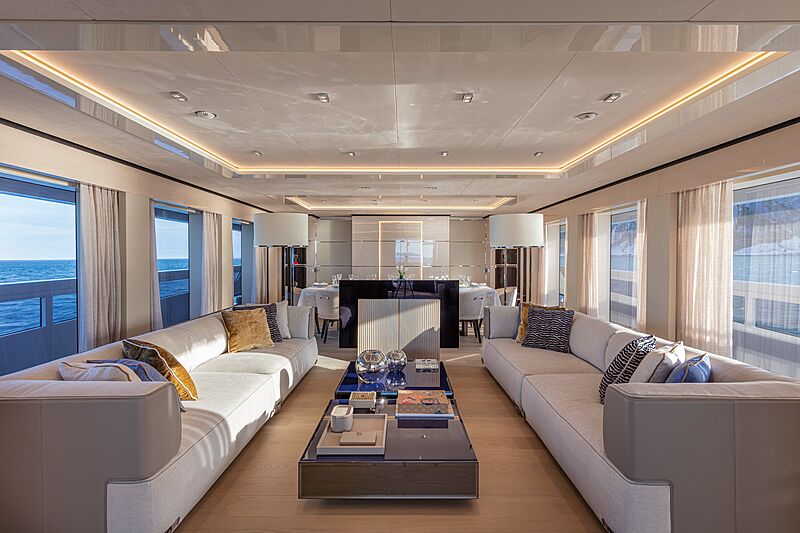 Italian designer names are abound. The free-standing furniture in the main salon, for example, is by Fendi Casa, a games table in the sky lounge is by Poltrona Frau, the accompanying chairs are by Trussardi Casa and the sofas on the upper deck are by Bentley Home. Other high-end brands include Contardi, Minotti, Porada, Maxalto and Paola Lenti. 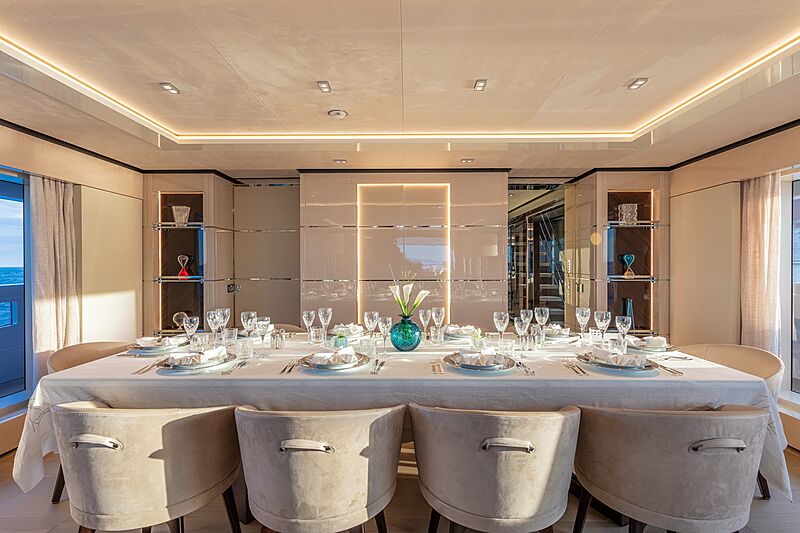 The on board entertainment was an important consideration for the owner and K2 has a last-generation audio-visual system developed in collaboration with Videoworks for full satellite signal reception at any angle and 5G-ready dual modems. The main salon features a 65-inch Beovision Eclipse TV that combines 4K HDR LED screen technology with the three-channel sound quality. Larger 82-inch TV screens appear in the sky lounge and master stateroom. 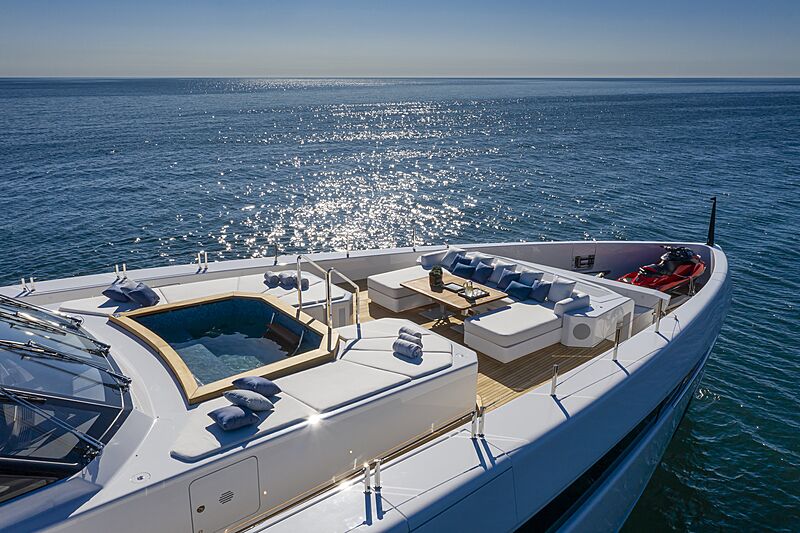 Twin MTU engines (1,939Kw @ 2,450 rpm) provide a top speed of 22 knots and a cruising speed of 18 knots. At an economic 12 knots the yacht has a range of more than 3,000 nautical miles. Two pairs of Naiad fin stabilisers ensure motion control under way and at anchor. Instead of an emergency generator a battery bank can provide 6 hours of electrical power in black-out conditions. The multitouch bridge system is by Team Italia.

The Columbus 50-metre Sport is exclusively chartered with Fraser, starting at €270,000 per week, and she is expected to make her official debut at the Monaco Yacht Show in September.