Just a few days after the announcement of the delivery of the 38 metre superyacht Tremenda, Admiral Yachts has today announced another superyacht delivery, that of the 49.6 metre Ouranos, launched in early April. Built for a repeat client, she features exterior design from the drawing boards of Uniellé Yacht Design. 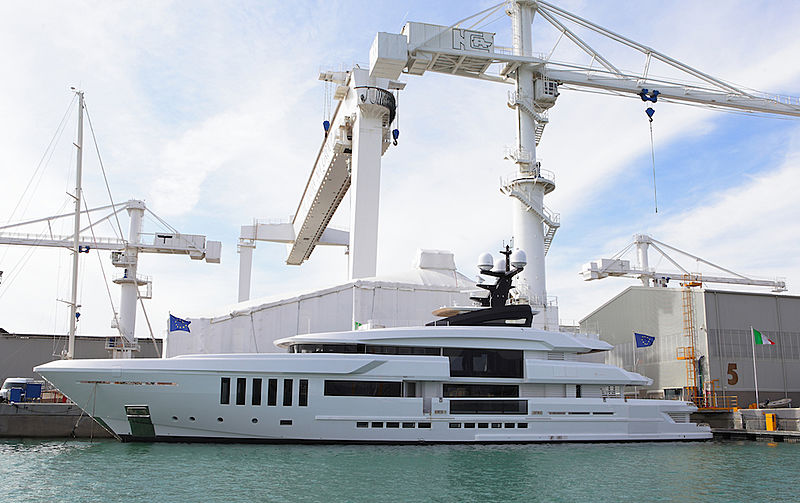 Jure Bukavec from Uniellé Yacht Design describes the new vessel and the challenges involved in the project: “The C Force 50 Ouranos follows the Admiral C Force fleet exterior styling concept. Modern and aggressive lines are emphasised by the black and white simplicity. I believe we have succeeded in effectively solving the challenge of designing a 50 metre yacht with under 500 gross tonnage with a clean styling solution which shows that a design limitationcan sometimes lead to a better and more innovative result.”

“One of the most notable features of the C Force fleet,” he continues, “is the double high central window. There are several design variations of it including one with a balcony. The main idea is to bring more light where is the most needed, into the main and upper deck salon. In this way, we create a penthouse style interior ambiance. Seen from the exterior, the window is a straight vertical cut which doesn’t interrupt the exterior lines.”

Ouranos will be cruising the Mediterranean this summer and will be on display at the Monaco Yacht Show in September 2016. She will subsequently cross the Atlantic to the Caribbean where she will spend her first winter. The owner and his family plan to offer her for charter.