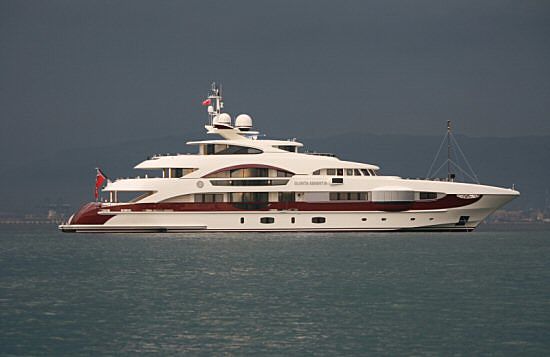 The 55 metre superyacht Quinta Essentia was launched in March this year at the Heesen shipyard in Oss. This semi-displacement yacht represents one of the most organic superyachts built by Heesen to date, with her unique atrium-like curve in the centre and with her striking external colour scheme, designed by Dobroserdov Design, of Oyster White and Merlot Red, inspired by the owner's love for Merlot wine. Michela Reverberi decorated the interior based on a design of Ken Freivokh which incorporates sleek curves, as well as stylish custom made furniture throughout. Accommodation is provided in the form of one owner’s cabin, two large guest cabins which are convertible into one large VIP cabin, one double cabin and one twin cabin as well as one VIP cabin on the main deck. Special features include a grand piano in the main saloon, and the large swimming pool with a feature waterfall aft of the main deck. Powered by twin MTU engines she has a cruising speed of 22 knots and a top speed of 24 knots. Here she was photographed arriving in Gibraltar on her maiden voyage and she is said to now be on her way to Napoli. Heesen will be launching superyacht Aurelia later this week.