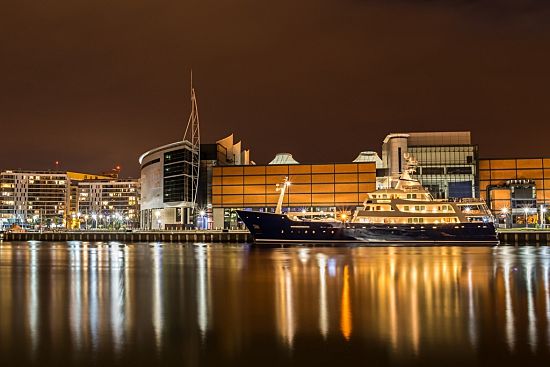 Built by the Danish Royal Denship yard in 2006, here is the 63.84 metre explorer superyacht Turmoil moored in the Titanic Quarter in Belfast. The owner that commissioned Turmoil was an experienced yachtsman, and was inspired by his previous yacht, the smaller 46.20 metre aluminium Turmoil - now named Dione Sky - built by Palmer Johnson in 1996. She is a self sufficient world explorer, and is the largest Royal Denship explorer vessel built to date.

On board she accommodates up to 12 guests as well as a crew of 13. Of her many notable features is a helicopter deck as well as the ability to carry three large tenders on board, including one of up to 40’ and two more of 25’. In regards to her performance, she is powered by twin CAT engines of 2,260 hp each, providing her with a top speed of 16 knots, a cruising speed of 14.5 knots and a range of 6,500 nm. Since this photo was taken earlier this month, Turmoil has made her way back to the Mediterranean where she is now docked in Barcelona.