Home > News > The 63rd edition of the Giraglia Rolex Cup

Rolex’s European yachting season commences in mid-June with the 63rd edition of the Giraglia Rolex Cup, which includes the Mediterranean’s oldest offshore race. Following a first leg from Sanremo commencing on 12th June, the fleet will gather in the harbour of Saint-Tropez for three days of inshore competition from the 14th to 16th June before embarking on the 243 nm offshore race the next day to Genoa via the Giraglia rock. 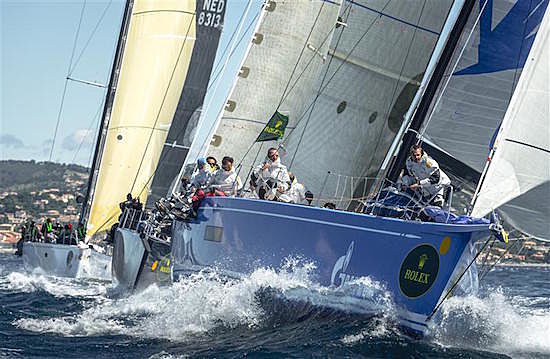 The Cup is a historic event founded in 1953, and despite originally coming from humble origins, is now an internationally-revered event attracting in excess of 200 yachts a year. Winners are awarded a Rolex timepiece alongside trophies.

The race record at the Giraglia Rolex Cup has been broken seven times in the event’s history. The list of winners comprises boats which have defined eras in the sport, including Stella Polare and Benbow through to Neville Crichton’s two versions of Alfa Romeo (victorious in 2003 and 2008) and Igor Simcic’s 100-ft Maxi Esimit Europa 2, four-time line honours winner at the event, which in 2012 set what looks like an unbeatable race record time of 14 hours, 56 minutes 16 seconds.

The current defending champion is the Swiss yacht Tixwave, a Swan 42. She follows a host of Corinthian crews to win the race on handicap, sailing boats largely in the 30-52 foot range. Seven of the last ten winners of the race have been crews composed entirely of Corinthian sailors. “It was quite special to do the Giraglia Rolex Cup this year because it is exactly 40 years ago that I did my first one,” explained Tixwave skipper Bernard Vananty following last year’s victory. “I was 18/19 years old. It was very windy, we had a prototype boat and we could not finish the race. Last year we came back to do the race again, we were second overall and this year we have won!”

The next edition of the Giraglia Rolex Cup will be held from the 12th to 20th June.