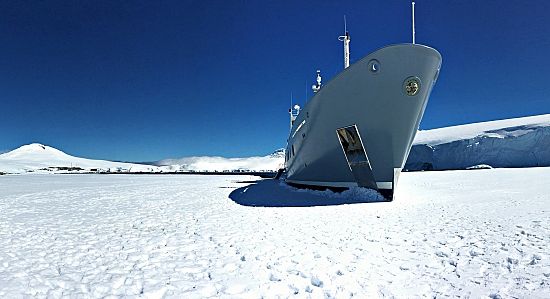 The converted fishing vessel Enigma XK was designed to sail in the roughest seas on the planet, and, when launched in 1988, was originally named Norna. Acquired by her current owner in 2011, she underwent a three-year transformation from rugged government vessel into luxury yacht in La Rochelle, France. Built in 1988 by Richards Shipbuilders, the no-nonsense explorer received, amongst other things, a new interior designed by Vitruvius as well as a new exterior styled by Philippe Briand. Enigma XK's 15-foot draft and range of around 5,000-miles means that she can set off on long explorations far away from supporting infrastructure. She is powered by twin 3,000 horsepower Ruston engines. The yacht works together with EYOS Expeditions to offer the most of every trip for her charter guests.

She was recently captured in fast-ice near Port Lockroy in the Antarctic Peninsula, near the Southern tip of South America.