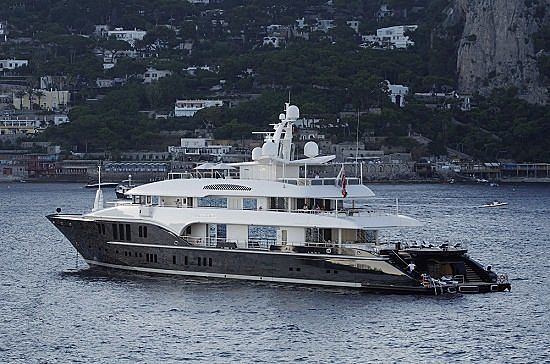 Superyacht Sapphire was delivered in 2011 by the german shipyard Nobiskrug. Both the exterior lines and the stylish interior have been designed by Newcruise, who also worked together with Nobiskrug on superyachts Triple Seven (2006) and Siren (2008). Sapphire accommodates 12 guests in 6 luxurious staterooms, including a large full-beam master stateroom on the main deck. Her interior can be described as Modernism inspired by Art Deco, and displays clean and pure lines, underlined by very strong light and dark contrasts and very elaborate details reflected in all aspects of the interior. Other notable features of the yacht include a helicopter pad, zero speed stabilisers, elevator, cinema and a large VIP tender of 12 metres. The yacht is powered by twin MTU 16V 4000 M60 diesel engines, which give Sapphirea top speed of 17 knots, cruising speed of 15 knots and a range of 5,000 nautical miles.

By Maarten, photo by Benoit Donne