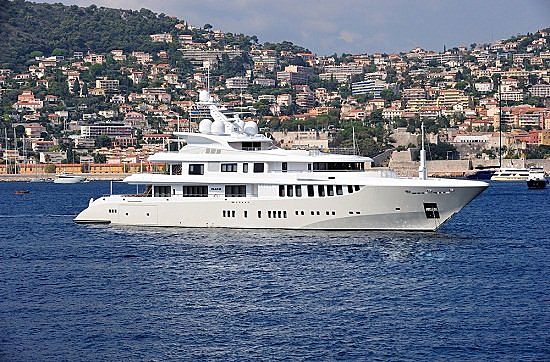 Superyacht Plan B at anchor in Villefranche sur Mer

Built by Abu Dhabi MAR Kiel (formerly HDW), and delivered just before in the summer, the 73 metre superyacht Plan B was ordered before the crisis as part of an order for six yachts of all around the same size. Due to the economic crisis four yachts were cancelled. In addition to Plan B, the second yacht in the series, HDW #423, is still in-build. Superyacht Plan B features exterior design by the German design studio Focus Yacht Design. She features a large master stateroom on the main, that has it's own balcony on portside, three VIP cabins on the upper deck, and two double and two twin guestcabins on the lower deck. On top of her bridge, the builder have created a helipad.