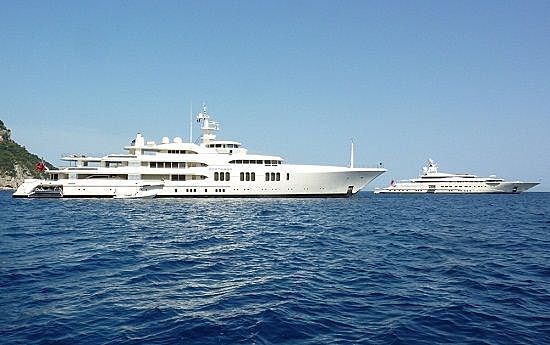 The Feadship Ecstasea and the Lürssen Pelorus

The 85.95 metre superyacht Ecstasea was built by Feadship in 2004 to a design of De Voogt Naval Architects and she has an interior designed by Terence Disdale. With a top speed in the region of 35 knots, Ecstasea is one of the fastest yachts in the Top 100 Largest Yachts. Here Ecstasea is seen at anchor together with Pelorus. The two yachts have been seen cruising together over the last couple of weeks. The 115 metre Pelorus is designed by Tim Heywood with an interior by Terence Disdale, Pelorus was built for a Middle Eastern owner who sold her to a Russian owner soon after completion. Pelorus was once again sold in 2011. Pelorus is powered by twin 5.300 hp Wärtsilä 12V26 engines, allowing her to reach an impressive top speed of 20 knots. Cruising at 16 knots, her range is approx 6000nm, on 280.000 liters of fuel. She has an impressive gross tonnage of 5317 tons. Interesting to note is that both yachts have kept their original names since their launch, even after being (re)sold.