The Dutch naval architecture and design studio Diana Yacht Design has unveiled a brand new, radical superyacht concept in time for this year’s Monaco Yacht Show: the 36-metre Blue Angel superyacht. With hydrogen propulsion providing the yacht’s power, Diana Yacht Design and the Belgian company Exmar Yachting prove the eco-credentials within the superyacht industry can be so much more than surface level. Blue Angel is aesthetically appealing; she is clean and athletic with modern exterior lines, and, above all, realistic in the design. SuperYacht Times spoke to the team behind Blue Angel to find out more. 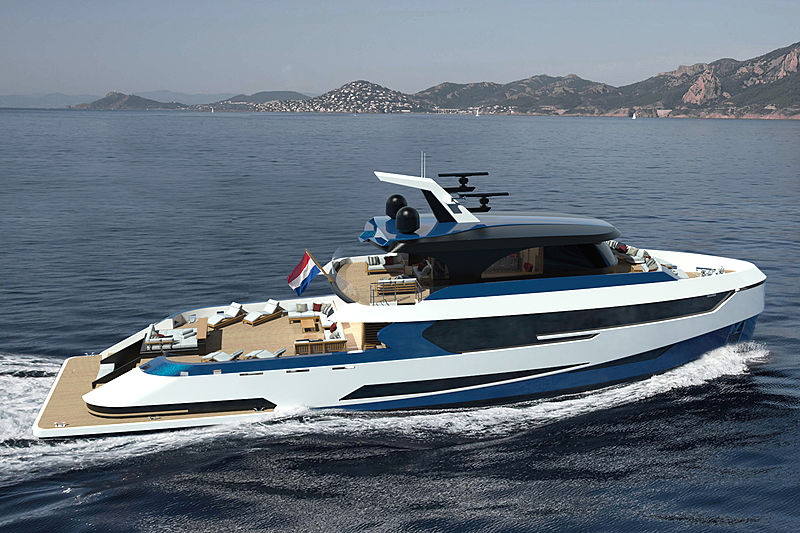 The idea behind this ecological yacht began with Exmar Yachting, who had been closely following the development of technology for creating a hydrogen-powered yacht. After some creative meetings with the Dutch studio, sketches of the first of three yacht concepts were made: the 'Ecological' Blue Angel concept.

The concept is based on meeting the needs of a hard-working, modern family who are looking to make the most of their leisure time, enjoy a luxury lifestyle and explore the world but who also care deeply about the environment. The concept’s name is inspired both by the ‘Blue Angel’ certification (or ‘Eco-label’) for products and services that are environmentally friendly in Germany, as well as the association in Asia between the colour blue and clean air and water.

Blue Angel is equipped to run on hydrogen as its sole fuel at cruising speed and hotel loads for up to 18 hours, making use of fuel cell modules. The benefits of this style of propulsion for the owner are many: it allows cruising with zero emissions without the noise pollution and vibrations found from the use of generators or direct drive propulsion engines and makes for a far more pleasurable cruising experience for those on board.

The hydrogen itself is carried in safe, cylindrical tanks and the distribution and monitoring system for the hydrogen has been extensively tested in pilot projects which met class approval. With this hydrogen providing 100% of the power at shorter ranges, the yacht is designed to use hybrid electric power at longer ranges. This intelligent hybrid system consists of two hydrogen fuel cells modules that work in combination with redundant diesel generators which can be used as a range extender or to increase the transit speed. 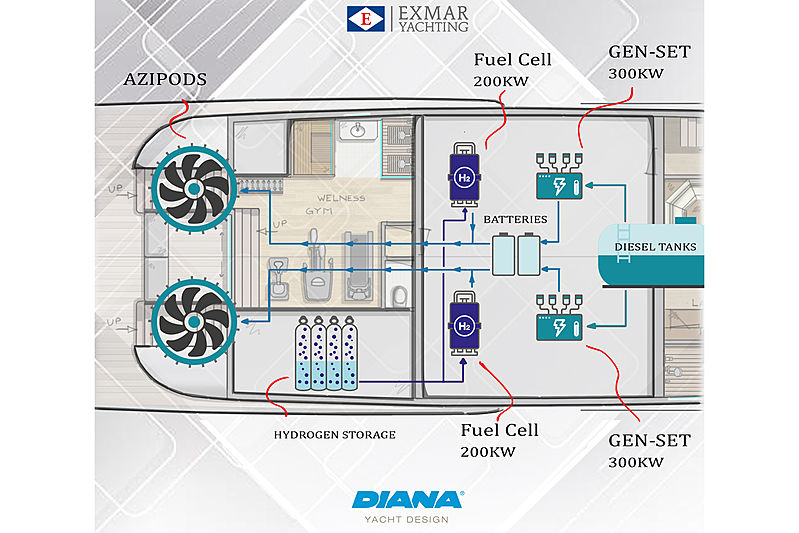 Designed to be a real family home on the seas, all of the luxury cabins can be found together on the main deck - an unusual feature for a yacht of this size. The design of Blue Angel is defined by its open and spacious decks complemented by large windows. Her exterior lines are accentuated by the forward-placed superstructure, giving her an explorer look, and two-tone colour scheme. The combination of a vertical bow and smooth lines gives the yacht’s overall appearance a striking, but not overly aggressive, look.

In terms of her layout, a full-beam owner’s cabin, one double and one twin stateroom can be found on the main deck. On the lower deck, there is an extra guest cabin which can be transformed into a TV/games room. Up to seven crew members can be accommodated for on board Blue Angel and make the most of her large galley and crew mess. 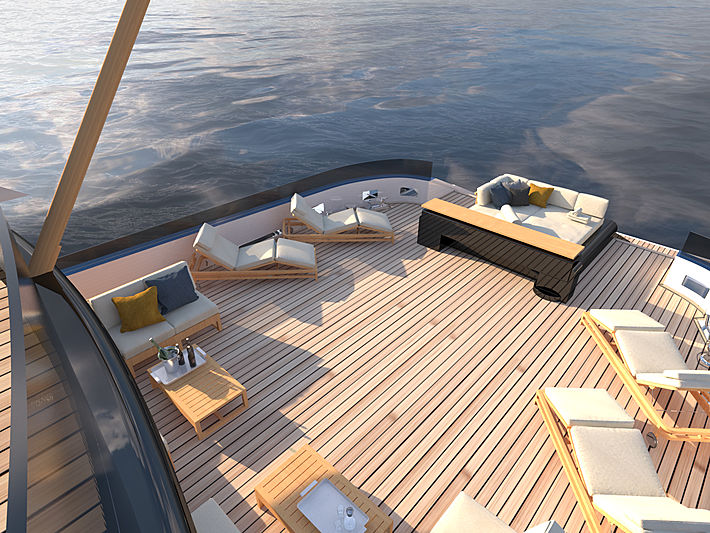 Photo: Diana Yacht DesignThe upper deck lounge can be opened up to create a large aft space which overlooks the lower deck activities and watersports. This generously-spaced aft deck is the ideal place to hang out by the sea.  When all of the tenders and toys are offloaded, this large open space can be turned into a lounging area, an outside dining area, a sports deck or even a movie theatre. Inside, you can find a full-beam lounge with floor-to-ceiling windows, as well as a coffee corner and a large dining table.

Going up to the bridge deck, there is a large lounge with an openable aft wall to create the ultimate beach house feeling, as well as an outside lounging area with sofas and Portuguese beds. The interior design of Blue Angel is both spacious and modern, creating a relaxed and open feeling for her onboard guests. 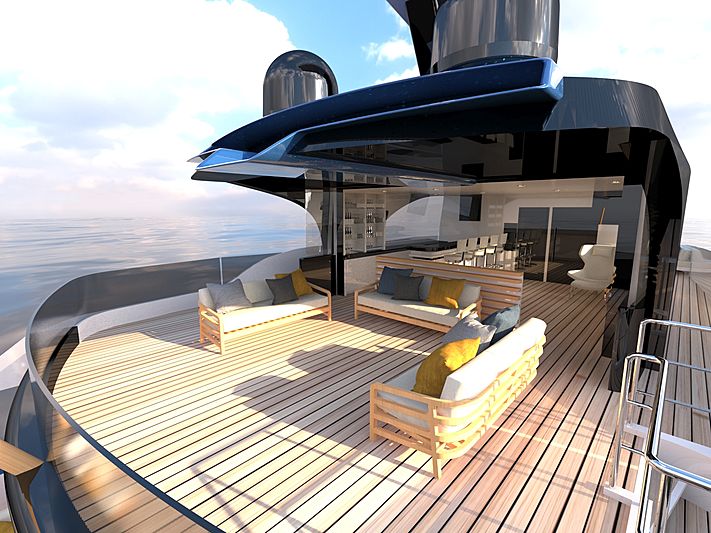 Digging into the details

To find out more about the inspiration behind this radical new superyacht concept, we caught up with Casper Marelis, naval architect and designer at Diana Yacht Design, and Xavier Ex, Head of the Exmar Yachting Department.

What was the main inspiration behind the design of Blue Angel?

Casper Marelis: Blue Angel had to be something extreme which really catches your eye. Looking at how the car industry has evolved towards greener solutions, you notice that all of the first models have been more extreme in order to gain people’s attention. Somebody choosing this eco-approach is somebody with guts and who likes to stand out from the crowd. A masculine and powerful exterior design matches perfectly with this idea. 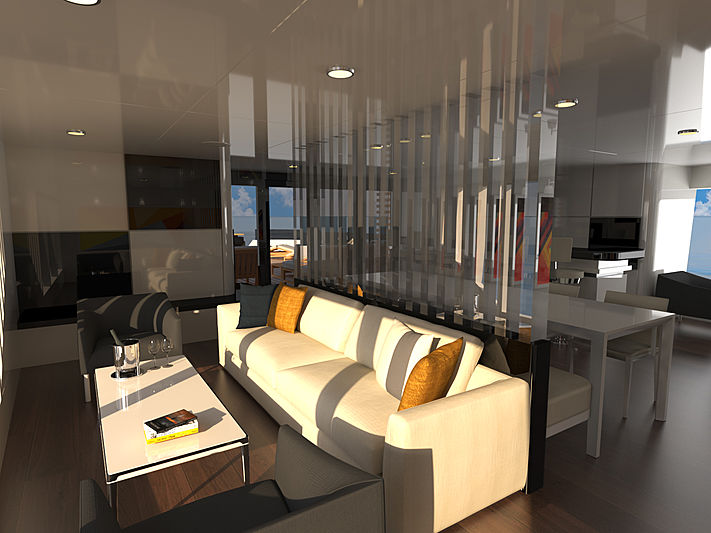 As co-creator of the Blue Angel concept, did the yacht’s design have to be adapted to accommodate the hydrogen propulsion system?

Xavier Ex: Indeed it did. We opted for Azimuth pods because besides providing great flexibility, reliability and low electrical consumption while reducing noise and vibration, these also provide extra space in the engine room. That extra space allows room for the generators and fuel cells to be installed in the footprint of your standard engine room. No immediate changes have been foreseen in the tank plan, allowing the yacht to carry a ‘normal’ amount of diesel on board for long-range deliveries. The amount of hydrogen that will be able to be carried on board will depend on the implementation of the space below the aft deck and can be filled in to match the owners’ wishes.

Aside from being more eco-friendly, are there any other benefits to having a hydrogen propulsion system?

Xavier Ex: When Blue Angel is running on hydrogen as its sole fuel, this allows for silent and clean cruising with zero emissions. These fuel cells are completely silent, vibration, smoke and smell free. This means you will no longer need to run any generators during your normal day-trips or whilst at anchor, when coming into or leaving port, thus meaning the onboard experience is much quieter and therefore more enjoyable. In addition, refuelling can be done by a truck. 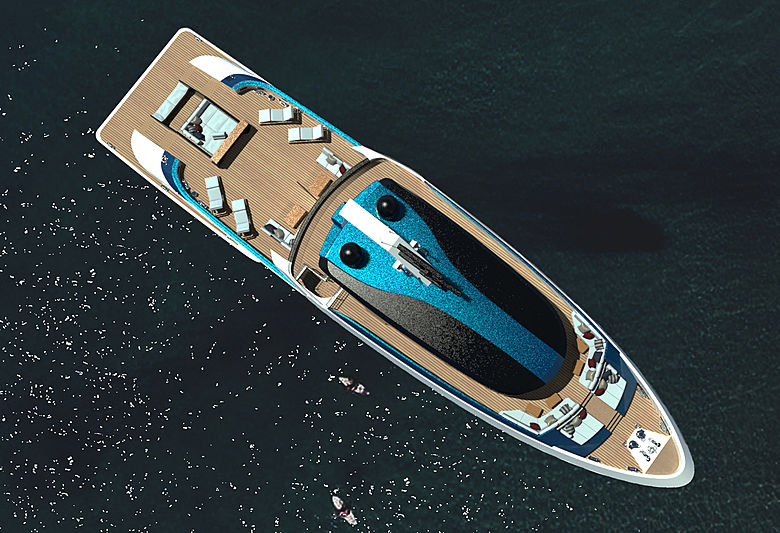 Photo: Diana Yacht DesignHave you designed an environmentally-conscious yacht before? Does the design process vary to make the yacht more eco-friendly?

Casper Marelis: Blue Angel is the first yacht design with an alternative propulsion system. Since 2007, we have been working on optimizing our generator capacity and complementing it with battery packs. This has had the biggest impact on the layout, but overall, the exterior design process hasn’t been much different. We are always environmentally conscious and make our yachts as fuel-efficient as they can be. The biggest component for this is the drag of the hull. One of the items which reduces the drag is making the hull narrower. Finding the balance between interior space and efficiency is the most challenging part for us.

Did your background in naval architecture affect your approach to the design? If so, how?

Casper Marelis: Having a naval architecture background allows me to estimate if something will work very quickly, like deck heights, gross tonnage, stability or the space available for construction. But this can also be a limiting factor when pushing the boundaries. I always try to push them as much as possible. By having all of the knowledge that we have here in the office, somebody will always say if it’s gone too far. This is what makes our designs realistic and avoids disappointments in the further stages of development. 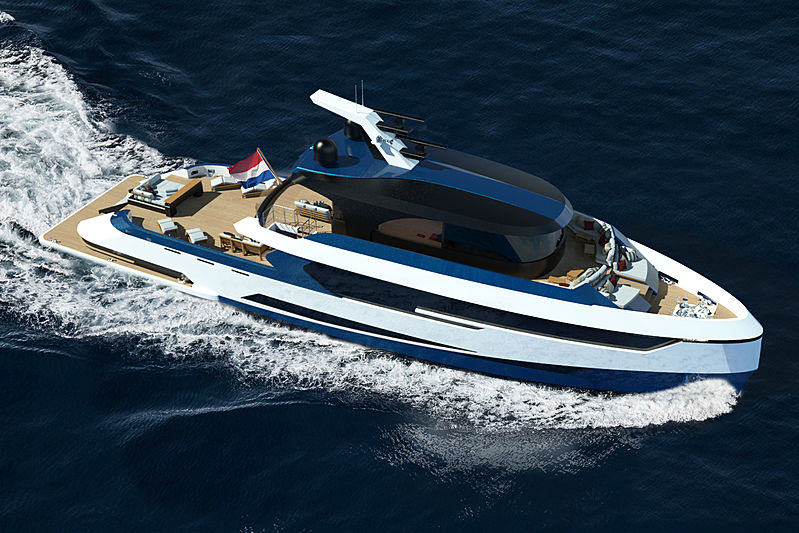 Photo: Diana Yacht DesignWhy did you opt for a forward-placed superstructure? Did you design the exterior differently to stay in tune with the eco-friendly approach of the project?

Casper Marelis: The market research we conducted for the project showed us that this was the best position for the superstructure to be located and also gives the yacht an explorer look and feel. The exterior design mostly reflects the family lifestyle with the big aft deck which can be used in different ways. While the children are playing in the water or on the aft deck, the parents can enjoy the upper deck while keeping an eye on them.

We also had to include large hydrogen tanks, so we needed to keep a close eye on the weight distribution. As we are naval architects, we wanted to make a concept that was realistic above all, and our studies showed us that this was the perfect position. By pushing the superstructure forward, you create a larger, sheltered aft deck without disturbance, with dimensions not seen on other yachts of this size.

What about the interiors? In what way does the interior design of Blue Angel reflect the eco-friendliness of the concept?

Casper Marelis: The design is clean and modern. By using sustainable materials and well-chosen furniture, we are trying to leave the smallest carbon footprint possible. We used a lot of glass and large windows to create an interior that is light and airy to bring the feeling of the outside in. We also wanted to make sure that the guests on board are more aware of the amount of energy they use. So in every room, we installed Smart Energy screens and would encourage guests to turn off the air conditioning when they leave the room and close the doors behind them. 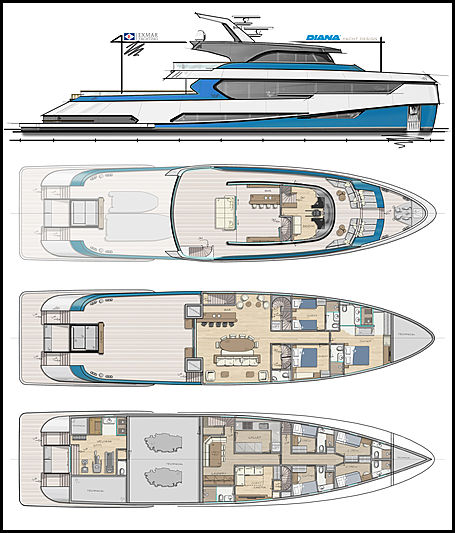 Finally, why was it decided to make the Blue Angel yacht 36-metres long? Would it be possible to scale this 36-metre up in the future?

Casper Marelis: 36 metres is an attractive size in both Europe and America. Similar size projects have been built and Exmar has been following the development of the use of hydrogen up close, hence our confidence that this yacht would not just become a test case. By using a proven system in a familiar size yacht for Diana Yacht Design, we eliminate the risk of failure, but the hydrogen installation size could easily be scaled up or down in the future.

To find out more about the Blue Angel concept from Diana Yacht Design, contact them directly using the details below.

5 things to consider when planning your superyacht refit