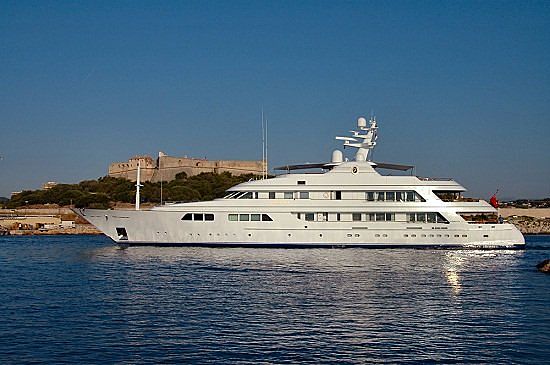 The Feadship superyacht Fortunato at the International Yacht Club Antibes

Fortunato is a 62.33m Feadship build at the Royal Van Lent yard in Kaag, Holland. She was build and delivered as Cakewalk for an American owner, who took delivery of his new yacht, the 86 metre Cakewalk, in 2010. Amongst her many features, are her hidden tender bays. The tenders are stored behind gull wing doors in het bow of the yacht, forward of the owner's stateroom. Fortunato was sold again soon after the Monaco Yacht Show in 2011, and has since joined the charer fleet of Peter Insull's Yacht Marketing. Her charter rates for the winter 2011/12 are US$ 480,000, and for the summer of 2012 her high season rates are € 400,000, with the low season starting at € 380,000.