Home > News > The final day of The Superyacht Cup

The final day of The Superyacht Cup was New Zealand Millennium Cup day bringing the most testing conditions for the fifty-two sailing superyachts with a solid 17 to 22 knot southwesterly breeze on the Bay of Palma. The triangular course included a long beat out to Isla de Sech followed by a run across the bay to Caba Regana and a close reach back to the finish.

The pursuit-style start, with the potentially slowest starting first in the reverse order of the elapsed time of the previous day, benefitted the yachts that had suffered in the changeable conditions on Monday. 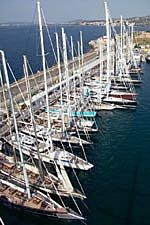 In Division 2 the 46.21m (152ft) Judel/Vrolijk designed sloop Pink Gin built by Baltic Yachts in 2006 was first away and never headed taking both the division and overall result with the best elapsed time difference to win the Millennium Cup 2007, particularly appropriate because the owner had taken his previous Baltic all the way to New Zealand to compete in the earlier Millennium Cup.

In Division 1 Yannekee Too a 34m (111ft) Bill Dixon designed schooner built by Camper & Nicholsons in 1995 took the honours. Yannekee is another well-travelled participant in the previous Millennium Cup in New Zealand.

After three days of sailing, and always in immaculate style with colour-coded yellow shirts, the overall winner of the Superyacht Cup Ulysse Nardin was the superbly presented 42.8m (140ft) Bruce King designed ketch Hetairos built by Abeking & Rasmussen in 1993.

Very few boats found consistency with Hetairos placing 2nd, 18th and 7th in her division to post a total score of 34, narrowly beating the 52m (170ft) schooner Eleonora built by Van de Graff in 2002 to the original 1903 Nathaniel Herreshoff designed Westward with a total score of 34.7.

The 30m (98ft) Reichel/Pugh designed canting keel ultra light maxi sled Alfa Romeo sprinted around the course, at times reaching speeds in excess of 18 knots, in just one hour and 38 minutes, two and half minutes faster than near sistership Wild Oats IX meaning that over the three days the results stand at two to one in favour of Wild Oats.

At the other end of the displacement scale, the J class replica Ranger sailed around the course in two hours three minutes, seven minutes faster that the 1933-built Velsheda leaving the score two to one in favour of Ranger which appears to have benefitted from some recent modifications. 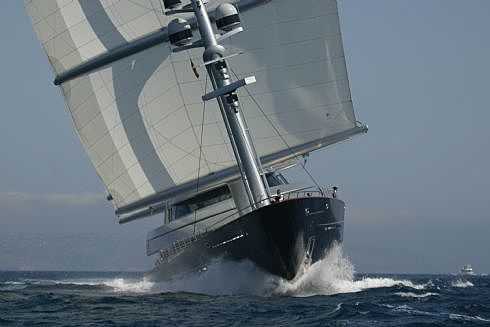 Every day of the regatta the vast 88m (288ft) three masted Maltese Falcon built by Perini Navi left everybody in awe including experienced yachtsmen. The remotely controlled free-standing carbon fibre rotating rigs, complete with 18 yards are a technological masterpiece, setting 15 in-mast fuling square sails operated by 75 electric winches aloft. The detailed design, testing, planning and engineering for such a vast and untried project is difficult to comprehend and the execution is an outstanding testament to all invloved.

For the final day of The Superyacht Cup it was possible to see the awsome offwind power of Maltese Falcon in action. Rather than the typical offwind problems of large sailing superyachts where exrtra crew are required to handle gennakers to give any reliable offwind performance, on Maltese Falcon the helmsman just bears away and the square sails instantly offer maximum projected area.

On the final reach to the finish Maltese Falcon was sailing close to 20 knots pushing a large bow wake in front of her.

The Superyacht Cup 2007 has been very much more than a simple sailing superyacht regatta. Parallel to the sailing activity in the Bay of Palma, the shoreside interest and activity has been like one of the major superyacht shows like the Monaco Yacht Show, but without all the motoryachts.

Many of the top builders like Perini Navi, Wally, Vitters, Alloy Yachts and Royal Huisman took the opportunity to showcase their production. As is often stated in sales and marketing literature, what better way to sell your products than the recommendation of your existing clients.

Many of the top naval architects were sailing aboard examples of their work and speaking to prospective clients. Just taking a short walk along the dockside might bring you into contact with Ed Dubois, Bill Trip, Gerry Dijkstra, Ron Holland or Phillipe Briand.

And there was even a small number of interior designers well know for their sailing superyacht work including Andrew Winch, Dick Young, Ken Frievokh and Mark Whitely.

This is very much the reason why the New Zealand Trade association assisted in setting up a magnificent gala banquet for the New Zealand Millennium Cup followed by The Superyacht Cup 2007 prizgiving. 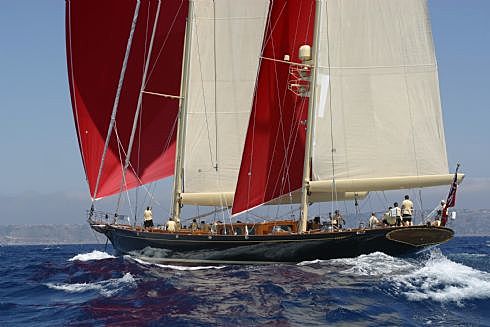