The first Amels 199, Event, has been christened at the Amels yard in Vlissingen, Holland. In a few weeks this avant garde 60-metre will set out on her maiden voyage to Norway to explore the spectacular fjords. 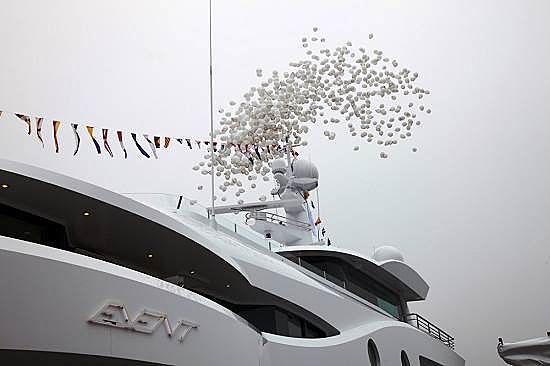 The successful, on-time delivery of Eventrepresents another successful collaboration between Amels and Imperial. Imperial’s CEO Evgeniy Kochman commented: “Of the many projects we have done with Amels, Event is one of the most exciting. Such a thrilling concept, brilliantly executed.”

The christening was an emotional occasion, the owner sending his thanks to the Amels workforce who were there to enjoy the moment after many months of dedication and hard work. The honour of christening the yacht was given to Laura Sessa, the designer who worked closely with the owner in creating an interior that perfectly complements the bold theme of Tim Heywood’s lines for the Amels 199.

For Mr.Heywood himself, seeing Eventin all her glory was a special moment. “I’m so pleased that Amels and the owner of Event shared my passion for such a thrilling looking design as the Amels 199,” said the British designer. “On paper and in concept form the scimitar bow and reverse tumblehome features of the design looked very exciting, and now to see the reality is a dream come true.”

After her maiden voyage to Norway, Eventwill sail south for the Mediterranean where she will become available for charter and then go on to star at the Monaco Yacht Show in September. “Her dramatic looks will really turn heads in Monaco,” predicted Rob Luijendijk, managing director of Amels. “Event looks stunning, so avant garde, yet unmistakably a Tim Heywood design. The Amels 199 remains true to the Limited Editions concept that we have been promoting for the past six years: a superior yacht of the highest quality and technical specification, delivered in much less time, whilst avoiding the risks of a full custom design. The continuing success of Limited Editions proves that we have found a 21st century concept that really appeals to the modern superyacht owner.”