Home > News > The Galapagos rediscovered by the Golden Fleet

In 1835, when English naturalist Charles Darwin explored the Galapagos Islands, who could blame him if he spent as little time as possible aboard his ship, the HMS Beagle? The 28 meter brig sloop was a type known as a “coffin brig” because it was tough to sail, and easy to sink. 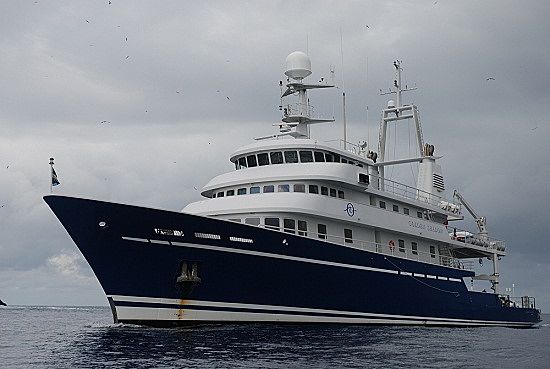 Flash forward almost 200 years to June 2012. Modern day Darwins, a multidisciplinary team of fifteen scientists from six different nations, made their own voyage of discovery in an enormously more refined vessel, the 67 meter research ship, M/Y Golden Shadow. These scientists came to the volcanic archipelago, located 972 kilometers west of Ecuador, to perform a comprehensive scientific survey of the Galapagos reef system. In more than 400 hours spent underwater, they gathered data to evaluate the reefs’ recovery nearly 30 years after the Galapagos experienced a mass coral die-off due to warm waters brought in by a severe El Niño weather pattern. 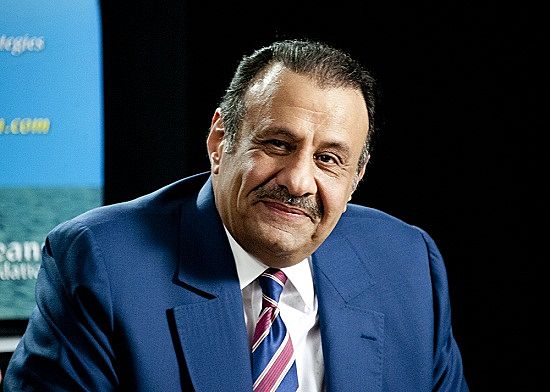 The Galapagos survey was sponsored by the Khaled Bin Sultan Living Oceans Foundation -- a public benefit organization founded by its namesake Prince Khaled Bin Sultan of Saudi Arabia. On a six-year odyssey to assess the health of major reef systems of the world called the Global Reef Expedition, the Foundation has surveyed and mapped numerous remote coral reef sites in the Caribbean Sea, the Galapagos Islands, and is now focusing their efforts in French Polynesia. Upcoming missions will include the Cook Islands, Tonga, Fiji, New Caledonia and Australia and key sites in the Coral Triangle. The Global Reef Expedition will conclude with research in the Indian Ocean and Red Sea. 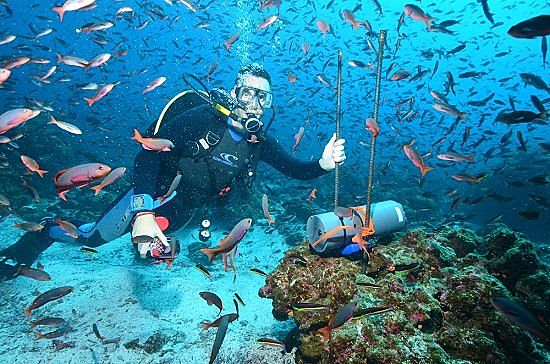 “It’s a sailor’s dream,” said Captain Mike Hitch, the marine director of the Prince’s Golden Fleet, which in addition to the Golden Shadow includes an 80 meter super yacht, the Golden Odyssey, a Cessna caravan seaplane, the Golden Eye, and a 30 meter sportfisher, the Golden Osprey. “It’s thrilling to contribute to work that helps us understand ocean ecology. Coral reefs play an important part in the health of so many species, and the survival of fisheries that feed millions of people.” 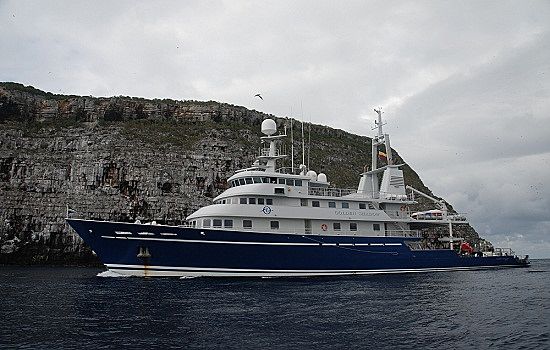 More and more, yachts like the Golden Shadow do double duty as scientific expedition vessels. But few pursue that role with the dedication of the Golden Fleet. That’s because each year Prince Khaled bin Sultan donates much of the fleet’s time to innovative oceanography and pursuit of the principle, Science Without Borders. 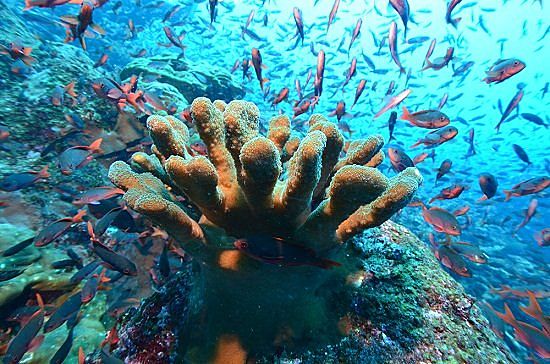 “Science has the most impact on conservation when it’s shared,” said Prince Khaled. “Our Science Without Borders theme keeps the Foundation focused on solving local and global problems through international cooperation. At the invitation of host countries, we sail wherever there are important oceanographic issues to study. And in return, we offer our findings, and the scientific resources of the Golden Shadow, to the researchers of every nation we visit.” 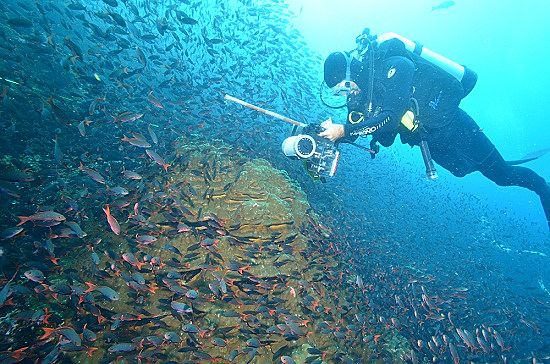 And those resources are world-class. Built in 1994, the Golden Shadow sleeps up to 48 scientists, officers, and crew. A biology laboratory and a fully equipped gym keep visiting scientists busy below decks. Up top, a stern elevator platform, capable of hoisting 12 tons, launches the Golden Eye, a Cessna Caravan Amphibious Plane, as well as catamarans and tenders used as diving platforms. A medical staff supervises each dive, and an onboard decompression chamber is standing by for emergencies. 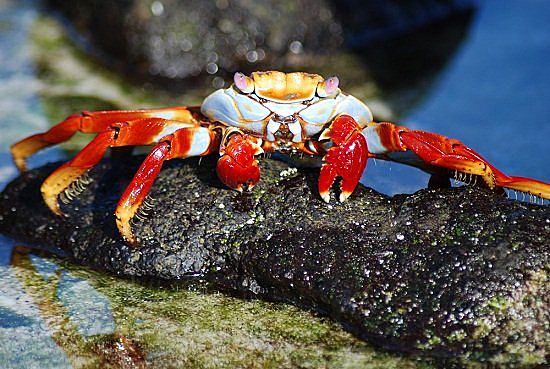 In the Galapagos Islands, the facilities inside the Golden Shadow were trumped only by the natural wonders outside. The islands and connecting waters teem with fascinating animals and plants. As Charles Darwin noted first, because of the islands’ isolation, many species, such as the Galapagos Sea Lion and the Marine Iguana, exist only here.

Ocean currents account for the Galapagos’ biological bounty. The cold Humbolt Current flows north from Antarctica, while a deep, nutrient rich current crosses from the west. The cold water keeps water and air temperatures moderate for islands that lie right on the earth’s equator. At the same time, a warm current flows north-to-south, creating ideal conditions for coral reefs at the top of the Galapagos archipelago, except when those waters occasionally get too warm. 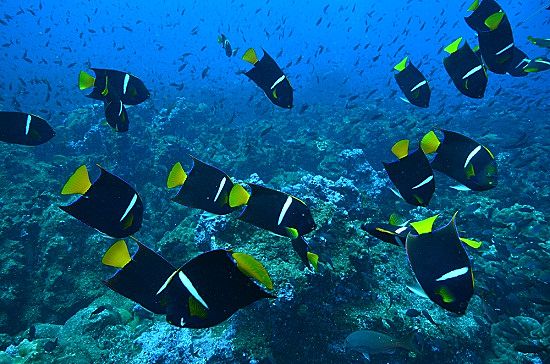 In 1982 a severe El Nino event raised the water temperature and killed off much of that reef system. But remarkably, considering our over-stressed environment, the reefs have since recovered. The men and women of the Global Reef Expedition hope to find out what accounts for such resiliency, and whether the reefs can survive future environmental stress.

“Because the Galapagos Islands are so remote, they demonstrate how reefs live without the influence of damaging man-made factors, like coastal development and nutrient runoff,” said Philip Renaud, a former U.S. Navy officer and Executive Director of the Khaled Bin Sultan Living Oceans Foundation. “The reef system of the Galapagos Islands has proven to be robust and remarkably quick to recover from stress.” 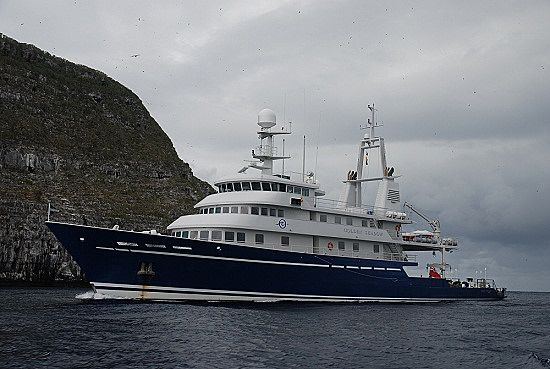 Divers operating from the Golden Shadow measured the size and distribution of coral communities at 23 sites, and examined their condition by extracting tissue samples and conducting ‘flyovers’ in the seaplane, the Golden Eye. They counted fish, to see how the fish populations measure up, and how many species are represented -- a whopping 123! Mostly, during four weeks of research, the scientists marveled at the irrepressible variety of life, as they shared busy days with sea lions and penguins, blue-footed boobies, Hammerhead sharks and Whale Sharks. 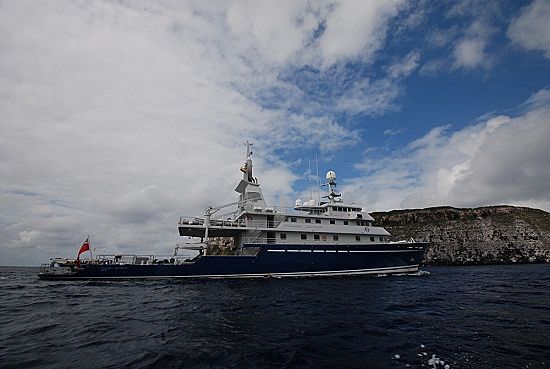 At night they returned to the Golden Shadow, and enjoyed a well earned rest in accommodations their forebear Charles Darwin could only have dreamed about.