Home > News > The ghost of yards past: Denison Yachts

As part of our history series from revered in-house yacht historian, Malcolm Wood, SYT takes a closer look at yacht builders that are, for one reason or another, no longer in existence. Here we cross the Atlantic and turn to Dania Beach in Florida, to take a look at the yachts built by Florida-based Denison Yachts. 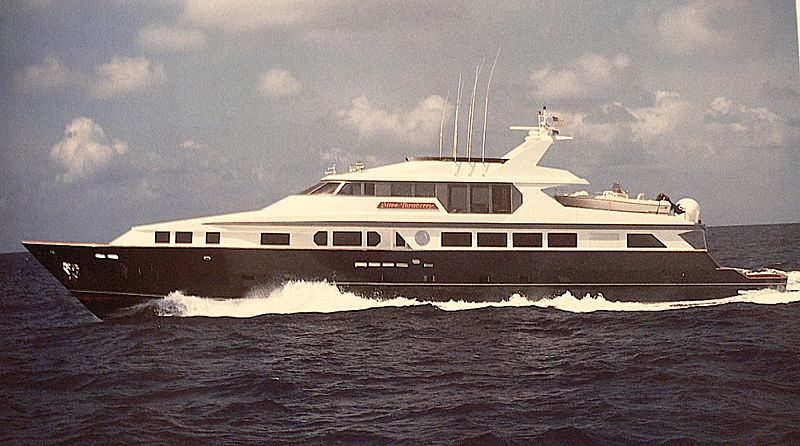 Denison Yachts was founded in 1983 by Christopher “Kit“ Denison, the son of Frank Denison who had established the leading motor yacht builder Broward Marine back in 1948. Whilst Broward went on to build more than 200 yachts, Denison built around 23 motor yachts during its’ existence.

Having said that, it is true that every yacht Denison built was different, not just in style but also in propulsion systems and other mechanical features. All were built with aluminium hulls and superstructure and powered by a variety of powerful engines driving Kamewa water jets, Arneson surface drives as well as conventional propellers. All these yachts were designed by in-house designer Joe Langlois. One fact was common to all, however - they were all fast!

The first yacht was delivered in 1985 by the Denison yard. It was Diamond G, a 26.5-metre motor yacht powered by twin GM diesels of 1080 hp each. This yacht was lengthened to 30.8-metres, as well as having her superstructure restyled and a new interior fitted between 1998 and 2001. She is known today as Stray Kat.

Two more motor yachts were completed in 1985: Astra Dee at 23.17-metres, today sailing as Lady Diane and the 36-metre For Your Eyes Only. This latter yacht was for the serial yacht owner John Staluppi and equipped with twin MTUs of 1960 hp each driving Kamewa water jets which worked to provide her with a top speed of over 30 knots. She is known as Blue Oceans now.

Denison appeared to accelerate production with no less than five deliveries in 1987. The first of these was the three-deck 007, coming in at 33.77-metres, that had her original MTUs replaced by Detroit Diesels in 1991. Today she is still sailing as Celebration.

The second yacht completed in this year was Ellie D, a 29.3-metre motor yacht powered by twin 8 cyl. MTUs. She sails today as the Lys d'Or. Next out of the yard was the 33.22-metre Nena VIII powered by twin 2585hp MTUs and Kamewa water jets providing a 30 knots maximum speed. After a spell in Singapore, she is back in the USA as AMG.

The last two 1987 deliveries were the 31.4-metre Quest (now known as Sussurro) and the 24.48-metre sports yacht Haggis II (now Concordia A). This latter yacht is powered by twin 1958hp Deutz-MWM diesels with Arneson surface drives with a top speed of 42 knots. She is based in Hong Kong.

The next two years were something of a disappointment with just one completion in 1988 and none in 1989. Thunderball was a 35.05-metre planing motor yacht for another aficionado of fast yachts, John Rosatti. He was a friend and business partner of John Staluppi. Thunderball was equipped with twin 3500hp MTUs driving Kamewa water jets and could top 45 knots. Her name is now Texas Star II.

Moving on to the next decade then, the yard’s fortunes seemed to have improved with three yachts delivered in 1990. The first was Miss Turnberry, the largest yacht to be built by the yard at 42.67-metres. Styling on this three-decker was by the late Gerhard Gilgenast with naval architecture by Joe Langlois. Powered by twin 2800hp Caterpillars and driven by Arneson surface drives, the largest yacht to be fitted with these, Miss Turnberry was capable of 25 knots. Sadly this yacht would become a total loss after being wrecked on a coral reef in the Bahamas in 1995.

Next to be completed was the 32.55-metre Patricia powered by twin 1930hp Deutz-MWMs, followed by the 33.22-metre Big Bad John powered by twin 2400hp Detroit Diesels, the eighth yacht of that name for Jimmy Dean. These yachts today are known as Villa Bella III and Heartsaver respectively.

Finally in 1991, the last year the yard was actively involved in building new yachts, three more yachts emerged from the Dania Beach facility. The first to be delivered was Astra Dee, a 28.06-metre replacement for the earlier yacht of the same name. She would be extended by 2.74-metres in 1994 and retains the same name today.

Pharoah, a sport fisher of 36.27-metres, followed, equipped with twin 2400 hp Detroit Diesels with a top speed of 27 knots. She was originally for a Mexican owner and today is named Sea Call.

The last yacht to be completed was the 36.88-metre Lady Anna, that would be fitted out at the nearby Derecktor-Gunnell yard in Dania, Florida. Powered by twin 2575hp Deutz-MWMs and capable of 28 knots, this yacht would have a short life, sinking in deep water off Cape May in August 1992.

That then concludes a detailed examination of the Denison Yachts production over their eight-year yacht building period. Today the Denison name continues as a successful brokerage company in the USA.

The ghost of yards past: Brooke Yachts International