Home > News > The high life: Will your next superyacht have a helicopter on board?

For many, leading the yacht life means an escape from the hustle and bustle of an ordinary, stress-filled routine in the city. Lying at anchor in a secluded tropical bay is the perfect way to disconnect and focus on the simpler things in life. But for some owners and guests, relying on the yacht’s top speed to get around in order to make the most of the surrounding areas is simply not going to cut it. For those individuals who live life at 100 mph or who simply cannot miss out on the next adventure, the only reasonable solution is adding a helicopter to your yacht’s arsenal of ship-to-shore capabilities. 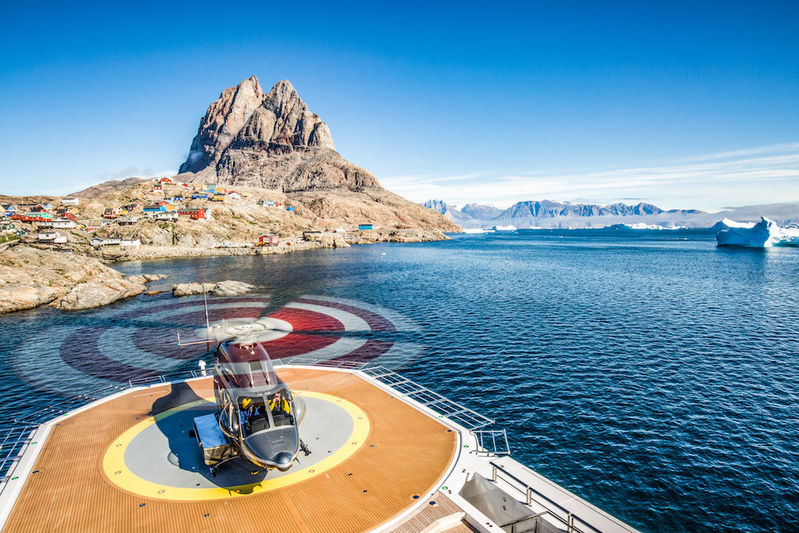 Though destined to save hours in transport from yacht to final destination, the move from tender to helicopter needs to be a calculated and well thought out one and, if done correctly, will knock down any boundaries that were experienced before. We met with a few experts in the field to find out what it takes to make the switch to the heli life a simple, enjoyable and safe transition.

For Frederic Lemos, Head of Airbus Corporate Helicopters, the reasons for having a helicopter landing pad on your yacht are quite clear. “A superyacht’s capabilities are multiplied by adding a helicopter as a fast, precise and agile form of transport and provides unique opportunities such as extreme sports, remote expeditions and VIP hosting.” But adding a helipad to your new superyacht, as Lemos explains, should not only be considered for the obvious thrill-seeker benefits it holds. Larger yachts with helicopter landing capabilities have not only become the norm, but also a valuable feature when it’s time to sell your yacht. “More and more owners are considering having helicopter landing capabilities not only for comfort and convenience reasons but also to improve prospects in the resale market.” 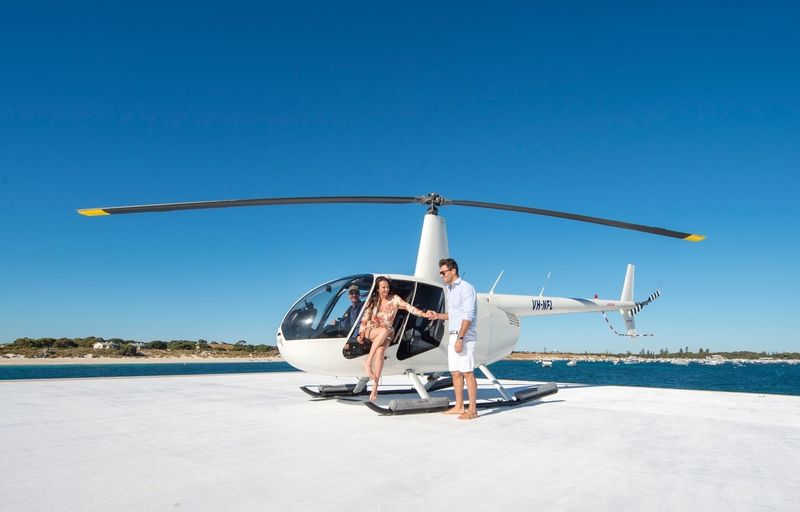 And this is a decision best made early on in the design phase, explains Jonathan Turner of Superyacht Aviation, as add-on decisions can lead to costly changes and compromising solutions. “The later in the build that specialist advice is sought and implemented, the more likely there are to be compromises for helicopter operations when the yacht becomes operational. For this reason, it is important for designers, shipyards and owner’s reps to get specialist, independent advice on HLAs (Helicopter Landing Areas) as early in the build process as possible.”

This stage will also ultimately have a great impact on the use of the yacht as a helicopter base, and most importantly, the owner’s enjoyment of this new extended capability. Deciding on whether the landing pad will be commercial or non-commercial is especially important as commercial HLA’s need to adhere to size, shape, and safety-marking requirements set by an Aviation Inspection Body. But Turner knows better than most that helipads on yachts often differ as much as the individual owners themselves. “Whatever type of HLA is designed into a yacht, it is vital that it will meet the requirements of the owner/operator. For instance, some owners want their HLAs to be able to operate helicopters regularly and routinely all around the globe, whilst others only require very occasional use for short hops around the Mediterranean.” 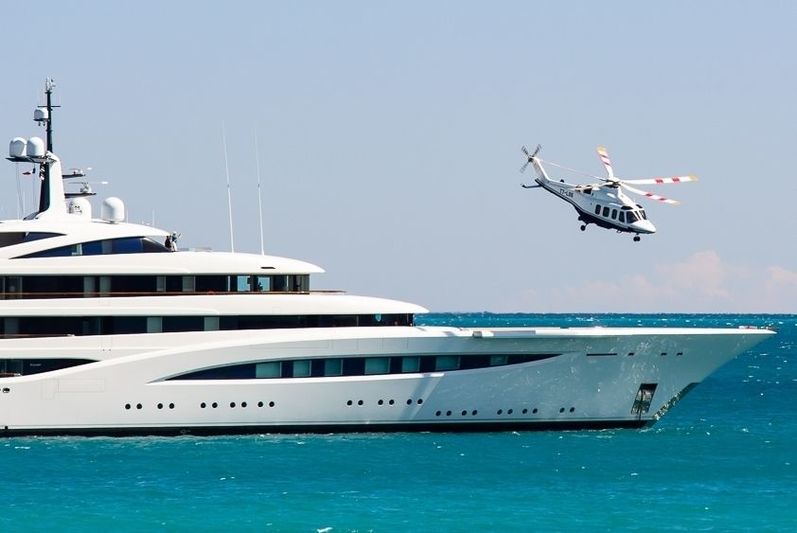 Photo: Julien HubertWhen it comes to the aircraft itself, Bell and Airbus Helicopters, amongst others, have become the preferred choice for yacht owners around the world. To facilitate such a life at sea for these aircraft, manufacturers deliver helicopters fully equipped with features that will not only help simplify maintenance on board. Bell Helicopter’s Colin Hodges explains. “One of the most important aspects that goes into delivering a helicopter for a yacht, is the marinisation process. This special production process is applied to platforms to protect the helicopter’s internal components against corrosion that can occur as a result of the harsh elements whilst at sea.” Being prepared is an important element of enjoying a safe helicopter experience each flight, something Bell takes very seriously. Not only does a helicopter come fitted with float kits, life jackets and life raft, but to ensure that pilots can confidently take on any mission requested by the owner, Bell includes flight and maintenance training suited to each type of its helicopters. 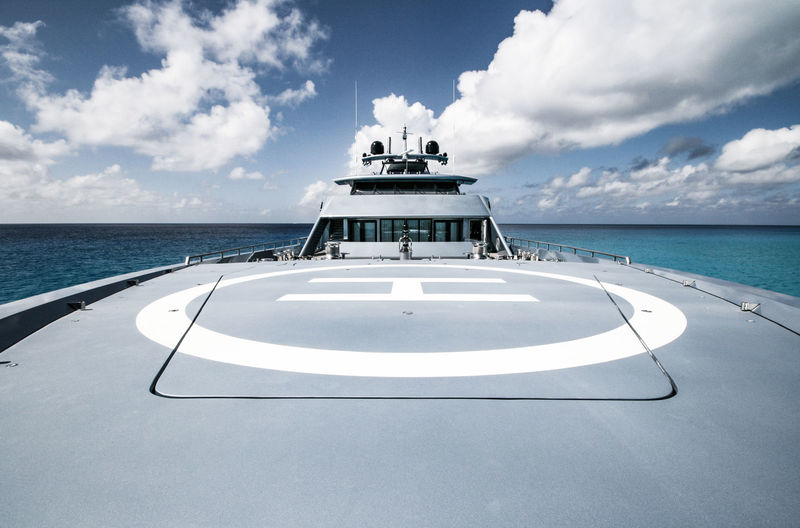 Although helicopters are often thought of as do-all craft that will endlessly expend an owner’s capabilities, these sophisticated machines, much like the yachts that carry them, have their own set of restrictions. Hodges continues: “Everyone has to remember that there may to be times when a yacht captain, pilot, or operational manager is going to have to tell an owner that the aircraft is grounded. This could be due to a multitude of reasons such as technical problems, operational limitations, weather limitations, aircrew issues, or local operating regulations. A helicopter has limits and you don’t want to exceed these limits.”

But surprisingly, as explained by professional pilot Laurence Perry who works on a 70m+ world-traveling yacht, operating these craft are not as complicated as it might seem – given the right experience, that is. “I have 21,000 hours and 35 years of helicopter experience so I would say it is fairly straightforward. There are specific methods and techniques that make it safe and simple. It is, however, always a good idea to make sure the pilot landing on your yacht is skilled and trained to perform that specific task.”

Turner points out that it is not only the helicopter itself and its pilot that needs to be prepared for the task at hand but also the yacht’s crew, who play a vital role in the safety of all operations. “To maximise crew competence, we recommend all HLA crew members should undertake practical, industry-recognised HLA crew training, such as that detailed by the UK Maritime & Coastguard Agency (MCA) and delivered by approved training providers.”

And as we found out, helicopters are used for a variety of purposes, each suited to the lifestyle of the owner. For Perry, his helicopter brings him and his passengers closer to nature. “I work on a boat built for adventure and adventurous guests. The nature of our travels give us the opportunity to see amazing and exciting destinations of our world.” 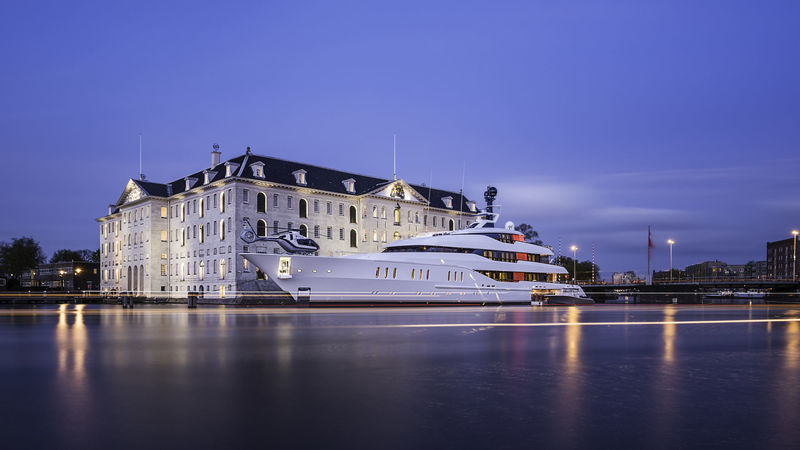 Usage is not only reserved for the adventurous, however. Lemos remembers a particular client who had a rather unique intention for his new helicopter in mind. “An example that stands out is that of a helicopter enthusiast and yacht owner who bought a second helicopter to help ferry an aging family member to the yacht. After the first year, the aircraft had flown a total of six hours. This improved the following year when flight hours more than doubled to a whopping 16 hours. The customer was perfectly happy with the helicopter and the purpose it served.”

So then, if having a helicopter on standby on your upper deck is such a must-have tool on board, why are we seeing so few yachts that carry these machines around? Hodges believes he knows the answer: “Helicopters are perfect additions to yacht operations, but the price of an aircraft may outweigh the perceived benefits. For owners and crews that have never had a dedicated helicopter, adding this asset may seem like a daunting, expensive, and time consuming task. This causes some owners to be turned off by the idea. However, those customers who do choose to add a helicopter to their yacht operations immediately realise how game changing it is when it comes to efficiency, safety, security, and pleasure.”

This article was featured in the lastest edition of the SuperYacht Times newspaper. Subscribe now to receive your copy straight to your door, and never miss another issue.