Just days ago, the first block of the hull of the CRN’s new 72-metre megayacht, the largest in the company’s history, and one of the longest ever built in Italy, was positioned inside the shipyard. Back in September the first sheet metal was cut for this steel and aluminium vessel, hull number 124 built by the shipyard: a completely new, custom-made project whose launching is scheduled for 2009. 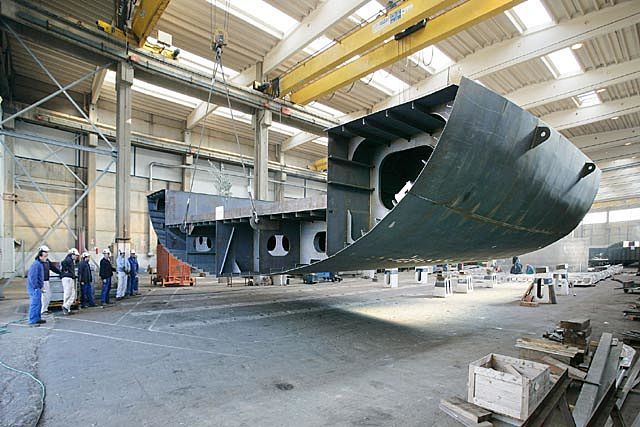 Clarena II, the name given by the Owner to this jewel, is a product of the fruitful working relationship between the technical staff of CRN and the firm of Nuvolari & Lenard, the same team that designed the first ship built for the same client, Clarena, launched in 2003 and part of the highly acclaimed, CRN 46-metre “Magnifica” line.

The current project, developed through an attentive analysis of the Owner’s wishes, has produced a vessel with a sophisticated, innovative design. The dashing shape of the hull, combined with the exceptionally modern, streamlined external forms - all made even more distinctive by the sharp, imposing bow - set Clarena II apart from other megayachts its size.

Nothing less than a tribute to shipboard family life, the Clarena II was developed in such a way that guests can lead a perfectly convivial existence throughout the day, all the while enjoying a close relationship with the sea.

To this end, the aft has beed designed as a fully innovative area of more than 100 m2 to served as a “beach club”. In fact, the swimming platform transforms itself into a large beach area practically flush with the sea, equipped with an external shower and beach chairs and perfect for use as a solarium by guests. The extensive, adjoining internal area is outfitted for full relaxation, with those onboard able to enjoy the proximity of the sea from comfortable sofas, or while sipping a sophisticated aperitif.

For his own quarters, the Owner chose an apartment covering 120 m2. Positioned on the forward portion of the main deck, it is accessible from a private lobby. In addition to the regal cabin with its double bathroom, this area includes a separate massage room and movie projection room. The owner’s wish was for the cabin zone to be closely connected to the sea, thanks to a hatch that can be lowered 90 degrees and used as a balcony over the waves.

Three other blocks of the hull are currently under construction at the shipyard, where they will be combined with the part already in place, assembling, piece by piece, this marvellous steel pleasure ship.

A total of 12 guests can be housed on the Clarena II, plus a crew of no fewer than 28, including chefs trained in haute cuisine and a personal physician.

With its two Caterpillar 3516 engines, the vessel can reach a maximum speed of 16.5 knots and a cruising speed of 15.