Within the past decade, two major tsunamis have impacted entire ocean basins: The tsunami that was generated from an earthquake near Sumatra in 2004 and another offshore Japan in 2011. Since then, technology and advisories on these events have improved greatly in providing warnings to coastal areas and mariners at sea for such large events. Even with these advancements, immediate precautionary measures are still required when a large earthquake has occurred nearby. By the time these alerts are issued, the tsunami may only be minutes away. 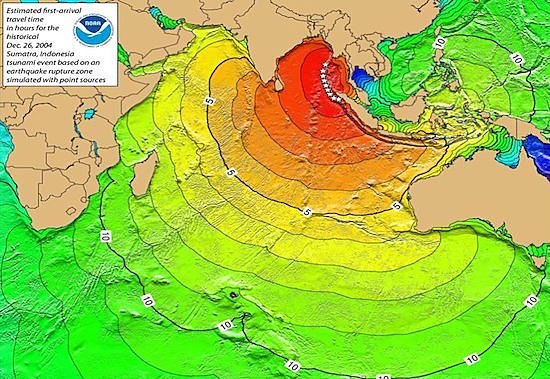 There are several agencies worldwide (such as the International Tsunami Information Center) and local government agencies that are in charge of issuing advisories, watches or warnings when a tsunami is possible or detected. Private companies that monitor ships forward these alerts to their appropriate fleets to provide ample warning. The last two previously mentioned tsunamis were triggered by massive earthquakes, but volcanos and underwater collapses or landslides can also trigger this natural disaster. Not every earthquake can generate a tsunami as several factors, such as the depth and location of the earthquake are analyzed by scientists, who have gathered this data to determine whether there is a threat or not. Depending on the threat, an advisory or watch may be issued. Buoys and sea level gauges that measure any unusual rise in sea water are analyzed and, if this is detected, a tsunami warning is issued. An earthquake in close proximity can generate a tsunami that will impact land within minutes. However, during a large event where a tsunami crosses an ocean basin (see the figure created by National Oceanic and Atmospheric Administration (NOAA) of the Sumatra earthquake in 2004), these government agencies and warning centers can provide warnings to distant areas that will be impacted hours in advance.

If a warning is issued while you’re out at sea, it is best to remain out in deep water (greater than 100-500 meters) until the warning has passed. This could last up to 12 hours as a tsunami is made up of a series of waves and not just one wave. The tsunami waves may only rise about 1 meter in deep water, but will rapidly build approaching shallow waters and land. Also, contact local authorities to confirm marinas are open and watch out for debris when you are given the all clear to return to land.

If you’re in port and a major earthquake has occurred or the sea level is dropping, it is time to leave the boat in harbor and head to higher ground. Do not wait for the warning to be issued as the tsunami may arrive before you receive the warning. If there are several hours before the initial onset of the tsunami, there are several things that should be taken into consideration. The safest option is to head out into the ocean but always heed the harbor or local authority’s directions. Take into account your fuel, food and water supplies as you may be out at sea for at least half a day. Make sure the weather conditions will allow the vessel to stay offshore that long and be aware that it will take longer than normal to reach deeper waters due to vessel traffic, especially if an evacuation has been ordered. If you cannot leave port and there is ample time, authorities may direct vessels to head up river. However, be aware that tsunami waves do funnel up rivers and streams and this does not guarantee that the vessel will avoid damage. If you choose this option, make sure you still have plenty of time to head to higher ground once the vessel is anchored. Do not stay with the vessel as you are still in a flood prone area.

Never hide in lee of the island from where the tsunami will strike. A tsunami does not act like a typical ocean wave. When tsunami waves reach an island, it will split in two going around the island but will wrap along the entire coast. The lee side of the island could have as much, if not, more devastation than on the side of the island that was first impacted. Do not seek shelter in a bay as tsunami waves that funnel into the bay generally refract off the land within the bay. This will cause widespread flooding, damage and wild currents.

Therefore when a tsunami warning is issued, either remain out at sea or, if in port, listen to the the appropriate authorities and evacuate to deep water as soon as possible. If there’s little time, evacuate and head to higher ground.