Two new charter yachts will be available early 2008. The first is the 40m Corvus, to be delivered in February. Corvus will be based in Marina Flisvos and is available for charter in the Eastern Med. Please contact us if you know which shipyard is building Corvus or if you have any photos of the yacht. The second new Greek charter yacht is O’Neiro. The sister ship of O’Ptasia (now Victory, photo below) is currently under construction at Lambda Nafs and will be due for delivery in May. 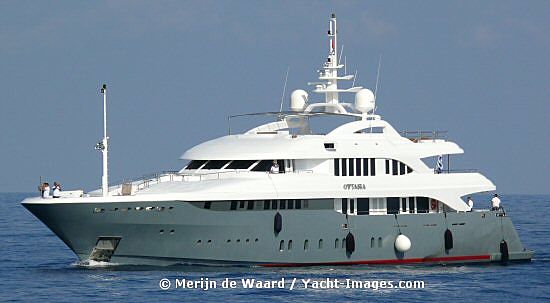 Fincantieri is currently building one of the world’s largest yachts, the 134m project Bravo. The Espen Oeino designed yacht is scheduled for delivery in 2010. Only recently we found out that Fincantieri is building two more superyachts, a 80m and a **** . The 80m yacht is designed by civil architect Renzo Piano with an interior by Nauta Yachts. Details of the 90m yacht are not yet available.

Not only Fincantieri is doing well, but also Baglietto and CRN have recently signed contracts for 70m+ yachts. **** will be the largest Baglietto ever build. She is scheduled for delivery in 2011 and will most likely be designed by Francesco Paszkowski. The 72m Clarena II will only enjoy the fame of being the largest CRN for 2 years as the 75m CRN #129 will take the title when she splashes in 2011.

The citizens of Muscat had to look twice when Al Said returned to her home berth in the capital of Oman. She underwent a small refit and the complete yacht was repainted, not in the sand color as you would expect, but she now boasts an “ice blue/white” hull and superstructure.

The Benetti Candyscape (photo below) was beautifully refitted a few years ago with a new interior by Candy & Candy. Some time ago she became available for sale, but her owner is not planning to step out of yachting, instead he is upgrading. His new 62m yacht is currently under completion in Italy at Viareggio SuperYachts. She is due for delivery in the spring of this year.

Unconfirmed reports also say that Viareggio SuperYachts signed a contract for a 90m yacht to be delivered in 2010. Please contact us if you have more information.

The McMullen & Wing Ermis 2 was delivered early December to her owner and just before delivery she passed the 60 knot barrier! Her owner is enjoying the New Zealand waters for now, untill she will be shipped to Europe in March. 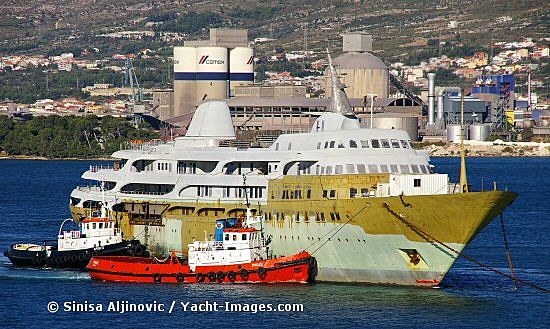 Years ago work started on a conversion project, project Kay, at the Keppel Shipyard in Singapore. The 90m commercial ship Vladimir Chivilikhin (originally build by the Gdynia Yard in 1990) was lengthened to 122m and a new superstructure was build. However, before the interior was completed, the conversion was put on hold for unknown reasons. Sinisa Aljinovic took this photo of Kay when she arrived in Croatia, where her refit is likely to continue. We will keep you up-to-date on the whereabouts of Kay.