Following our article on the 47m Mysterious Aerorig yacht, we received more information from one of our trusted readers. The yacht was being completed in the former Bruynzeel factory in Zaandam and was already launched in the summer of 2006. Nowadays she is still moored at the same location, behind the factory. After the launch construction work continued, but she became too heavy and became stuck on the bottom. She is owned by a Dutch millionaire who lives on the Caribbean island Bonaire. 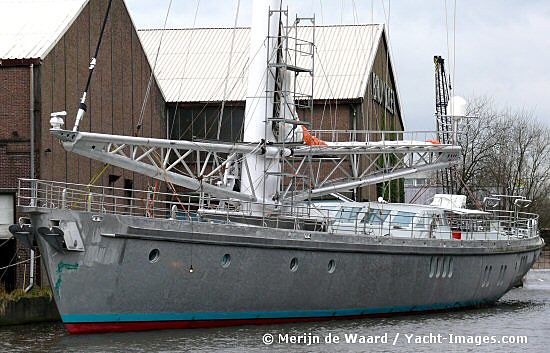 The Saudi owner of the Golden Fleet, who often makes his yachts available for scientific research projects, is reportedly considering a new yacht. According to Boat International his new yacht is currently on the design table.

An unnamed owner who is building a superyacht in Germany at a less known shipyard, recently bought an interior outfitting company. Reportedly he was concerned about the quality of the interior work on his new yacht.

In November 2007 Baglietto launched the 53m Gitana. She is a sistership to the 53m Blue Scorpion which was launched by Baglietto in 2006. Gitana has a white hull and will be delivered to her owner in February.

After the owner of Turmoil passed away, it was uncertain what would happen to his new yacht. It now seems that his family plans to keep this master piece and make full use of her. After cruising in the Caribbean and Brazil she is now spending time in Puerto Madero, Buenos Aires, Argentina.

The owner who converted Giant I into a yacht has started a new conversion project. He is now converting the 68m Simon Fraser into a yacht at the Benetti Shipyard.

Speaking of Giant I, recently we came across this video showing the fire onboard the yacht. The fire broke out on 26 April off Antalya. All crew were rescued and the yacht was towed into the port of Antalya. We are glad to report that Giant I is currently undergoing repair works at Amico and will grace the seas soon again.