German photographer Alexander Otto took photos of several superstructure parts in the port of Bremerhaven last week. When you take a close look at the photos, you will notice this must be a very special yacht. 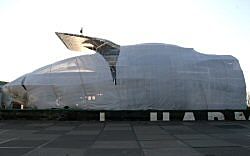 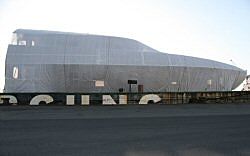 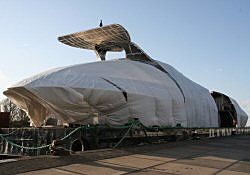 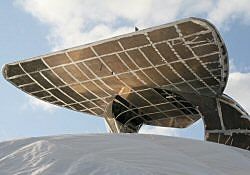 The most interesting feature visible is the huge wing over the full beam on the upper aft deck. It’s very difficult to judge her size but we're guessing the yacht must be over 75 meters. Please contact us if you have more information about this special yacht!

At the beginning of March the Casco of the first Icon yacht arrived at the shipyard in Harlingen, where she will be completed for delivery in 2009.

In 2005 the 90m Nahlin arrived at the Nobiskrug shipyard for a complete restoration. Last week the partly completed yacht was relaunched and shipped to Blohm & Voss for completion. It’s unknown why she left Nobiskrug for Blohm & Voss, but rumors are floating around that ThyssenKrupp will sell the Nobiskrug yard soon.

The names of two Lürssen projects were unveiled this week. The 155m project Sunflower was named Al Said and she left the Lürssen yard, flying the the Oman flag, on her way to Gibraltar, where she arrived this morning (photo). Project Bounty Hunter, which will launch this summer, will be named Vive la Vie. 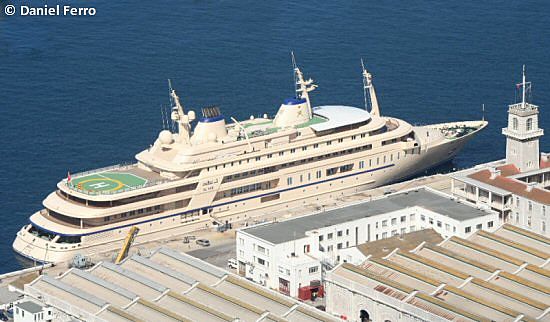 We recently came across a 37m motor yacht which is supposed to be called Madhuri. Most likely she is, or will become, available for sale as Camper & Nicholsons will show her at the upcoming Antibes Yacht Show.

Industry magazine Superyacht Businesses revealed the name of the 54m Admiral/Mariotti currently under construction in Genoa. She will be called Alcor and is owned by the owner of the Admiral Challenger 85 Jet Lag. Delivery is scheduled for this summer.

The partnership between Admiral/Mariotti can already described as a success, as they secured two more orders, a 58m yacht and a 73m yacht. Both yachts will be designed by Luca Dini and are to be delivered in 2010.