The service division of Benetti is currently working on the conversion of the Simon Fraser. The conversion of the 68m explorer yacht started in November 2007 and is scheduled for completion this summer. She is owned by the owner who converted Giant I into a yacht. 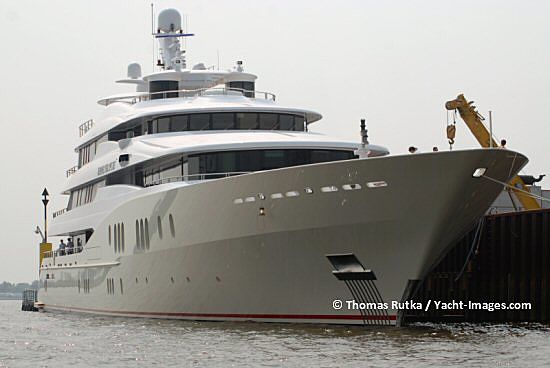 The success of Abeking & Rasmussen seems the continue, as they just signed the fourth yacht in their 78m series, of which the first one, Eminence, is almost ready for delivery. No hull number is known yet, but the yacht will be delivered in 2011.

Dubai Drydocks, who is currently working on the conversion of two megayachts, recently completed another project, Dubai Magic. It’s unknown if the 45m catamaran is a new construction project or a conversion. Please contact us with more information.

Following the launch of Amapolla in 2007, Rodriquez yachts launched the second yacht in their new series. While Amapolla was a Collezione 38, the new yacht is a Rodriquez Collezione 36. She was seen at the shipyard in La Spezia a few weeks ago. 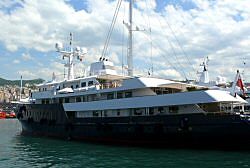 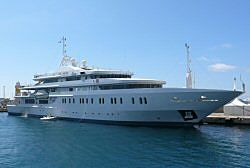 In addition to the recently refitted Lauren L, two more large yachts were refitted. The 60m Titan was repainted in Genoa after she was sold last year. And the 86m Alysia follows the example of her sister Delma, she is now sporting a white hull as well with some grey details on the superstructure.

On the evening of May 31 the Norwegian charter yacht Ile Flottante went on the rocks at Kragerø in Norway. All 22 passengers were safely evacuated and luckily the yacht was towed afloat without too much damage and she is sailing Norwegian waters again!

A rather unknown shipyard in Taiwan, Ta Chiao Bros. Yacht Building, recently launched a 32.5 meter Fontaine designed sailing yacht. After her launch the yacht was transported from Taiwan to Fitzroy Yachts in New Zealand for completion. The yacht is called Northwind, but there are also indications that she might be called Survignon when completed.

The mysterious Aerorig yacht, on which we reported for the first time in February of this year, has moved positions. The yacht is still in Zaandam, but in deeper waters. her move could indicate that progress is being made, it remains to be seen though, if and when she will be completed. 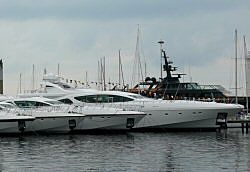 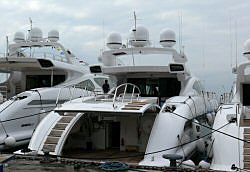 Last month Overmarine launched the second Mangusta 165. Rumors said that she was ordered by the owner of Arctic P as a replacement for his Mangusta 107 called Z. However next to the new Mangusta 165 was a new Mangusta 130 with what could have been a big Z on the stern. Please contact us if you have more information.

After a comprehensive refit Lady D (formerly Quest) left Seattle on her way to Mexico, but now she has been anchored off La Paz for over a month due to a failure in one of her main engines. After repairs are done, the yacht will set sail to the Pacific with her owner, who lives onboard.