At the beginning of 2007 we reported that Nourah of Riyad had changed names to Bella Stella and was sold to a Greek owner. This was quiet a surprise as her Arabian owner had enjoyed her for many years and there were no indications that she was for sale. But the sale seems to make more sense now as we just found out that the owner is building a new 65m (213ft) Nourah of Riyad at the new Turkish Yay Gemi Yapim shipyard. Both her interior and exterior will be designed by Donald Starkey. 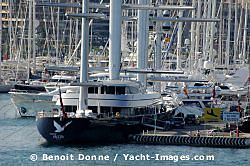 Only a few days left before the Superyacht Cup will take off in Palma de Mallorca and most of the yachts already arrived in Palma to prepare for the race. Royal Huisman’s latest 51.6m Meteor arrived in Club de Mar a few days ago together with the 88m Perini Maltese Falcon and Pendennis’ Rebecca. With over 55 yachts registered this promises to be a spectacular event!

The 47.5m Benetti Um Hurair (formerly know as Ilham II and Gulnev) was heavily damaged during a fire a few years ago in Dubai. But we are happy to report that she has been rebuild to her former glory, as she was seen a few months ago in Dubai.

According to the latest top 100 of Yachts International the owner of Solemar might be building a 246ft yacht at oceAnco. This could mean that the Y703 will be the new Solemar, but nothing will be confirmed until her launch in 2008.

After building his yacht in eight years, the owner of the 48.53m T6 made his yacht available for sale after just taking delivery. T6 is for sale through Central Agent’s Nigel Burgess.

Please keep sending your own photos and rumours to [email protected]