The summer season has ended and many yachts have gone to a shipyard to prepare for the Caribbean season. Blohm & Voss saw the arrival of the 115m Pelorus and 777, while Abeking saw Aviva returning, most likely to get warranty work done. The Lürssen Bremen yard welcomed Rising Sun and EOS and Genova based Arredamenti Porto is working on Marina and Fore Blue. Amico saw the arrival of Giant I, which will most likely be restored after she suffered a fire in Antalya earlier this year.

Dubai is becoming a popular refit location. The classic yacht Kalizma was rebuild there recently and another classic, Haida, is currently under rebuild. The 63 meter Shahnaz is also a regular visitor and with more yachts cruising in the area it’s likely we will see a growth in the number of yachts refitted/rebuild in Dubai and the surrounding area.

One of the more unusual yachts around is the 35 meter catamaran superyacht Disco Volante GT. She has her home berth at the Vouliagmeni Marina, near Piraues, and during the summer she cruises along the Greek Islands. Disco Volante GT was built by T-Craft in South Africa as Chief Flying Sun. The following photo was taken by Benoit Donne in Skiathos in August 2007: 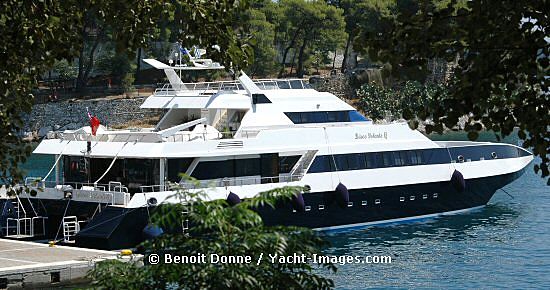 Philippe Starck is currently working on the designs of two yachts, a 246 feet and a 394 feet yacht. Both yachts are currently in the design stage and Starck is working closely with Martin Francis on the 394 feet, which is supposed to go over 25 knots.

McMullen & Wing recently launched the highly anticipated Ermis2. The 37 meter Ermis is powered by three MTU engines which should give her a maximum speed of 60 knots. After delivery she will probably be shipped to Europe and based in the home country of her owner, Greece.

Another new launch is Odessa. The 50m Odessa was launched from the Proteksan Turquoise shipyard and is scheduled to make her public debut at the Antigua Charter Show in December.

The owner of the Oceanfast Never Say Never can keep his yacht docked behind his home in Miami. The Miami Herald reports that the neighbor of the owner lost a court case in which he wanted the owner to move the boat back, as the bow was in front of the neighbor’s house.