Recently we have come across Al-Noores, an interesting Dutch build yacht. She was built by the former K Damen shipyard in 2001. She may appear to be one of the many tugs this shipyard has built, but she features a luxurious interior. The owner choose a tug styled yacht, because of its robust looks, but also for safety reasons. The yacht is owned by the Oman Royal Yacht Squadron. We believe that she is used as a tender or support vessel to the Royal Yacht. The following photo shows the Oman Royal Yacht Al Said with on the right Al-Noores. 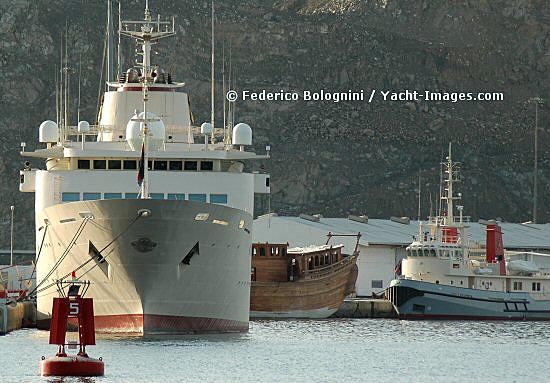 Speaking of Arab yachts; the 133m Project May currently under construction at the Peterswerft will most likely sail under the same name as her predecessor, Al Mirqab. During the summer we already reported the launch of a Riva Athena 115, Al Mirqab II, which will most likely be her main tender.

The Amercian Itialian owner of the classic 36m Hall Russel Gin Tonic is currently awaiting delivery of his new yacht. Gin Tonic II will be 74m and is under construction in Chile at Marco Yachts. She is scheduled to for delivery next year.

According to German yacht magazine Boote Exclusiv, ThyssenKrupp secured an order to build six yachts in the 70m range. The yachts will most likely be used for the charter market.

The owner of Alloy’s Paraiso is very happy with the Fontaine Design Group, he recently asked them to design an extended version of his current 112ft yacht. The new yacht will be 132ft and will be delivered in 2011.

The present owner of the Codecasa Family Day bought the yacht just after her delivery and he also placed an order with Codecasa for a new 65 meter yacht. The owner of Flying Dagger has also ordered a Codecasa 41S. The yacht will be delivered in the spring of 2009.