Fincantieri signed a second superyacht contract! We can’t confirm the length yet, but the yacht should be in the region of 80/90 meter and is scheduled for delivery in 2010. Please contact us if you have more information.

Shortly after her launch, hull 778 from Nobiskrug departed the shipyard on her way to the Baltic, where she is currently under sea trials. The yacht will be called Siren.

Rumors say that at the end of November a new Leopard 31 sunk off Genoa. It’s unknown what happened with the yacht, but luckily all crew were saved. Reportedly it was the unnamed yacht on this photo, which was showcased at the Cannes Boat Show in September.

According to the NY Daily News the American owner of Ultima III is currently building a new yacht, Ultima IV. The yacht should hit the water sometime soon.

Marco Yachts, who are currently finishing the 75m Gin Tonic II, signed contracts to build two more yachts. Both yachts have a length of 82m and will be designed by Ken Freivokh. The first yacht will be delivered in March 2010 and the second in November 2010.

Platinum Yachts of Dubai is currently undertaking the conversion of the former cruise ship Leisure World 1. The ship has been renamed Dabawi and work on her started in May of this year. Her superstructure will be rebuild and a complete new interior will be installed. It’s still unknown when the yacht will be finished. The conversion of the 97m Cosmos (formerly Maria Kosmas), which started in 2005, should be well underway now and she could be finished somewhere next year. The following photo shows a yacht under construction/conversions in Dubai, this could be Cosmos: 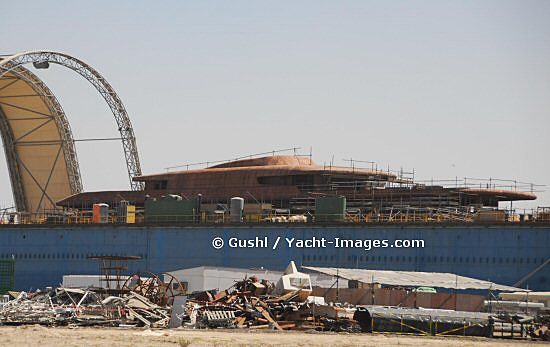 The San Benedetto shipyard recently converted a former passenger ferry into a yacht. Maria Vittoria was converted for an Italian owner who wants to make the yacht available for charter. The interior and exterior of the 33m yacht were restyled by Lenci Marine.

Reports in the German press suggest that ThyssenKrupp wants to sell Nobiskrug. The Schleswig-Holsteinischer Zeitungsverlag reports that no buyer has been found yet, but they want to sell the shipyard because of economic losses.