A lot has been happening in the world of superyachts and as always the SuperYachtTimes.com team stays on top of the latest news and rumours. In 2009 we will revive our bi-weekly series of SuperYacht Gossip, featuring the latest inside information from the superyacht industry. 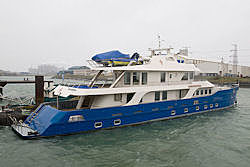 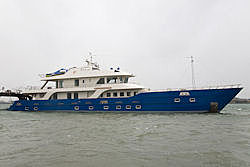 We came across a very interesting new yacht recently. She is called Ocean Boulevard and approximately 40 metres. She is based in the South of The Netherlands and believed to have been built by Shipyard De Donge, who specialise in the construction of dredgers, in 2006 or 2007. The photos shown above were taken by Wim Kosten of MaritimePhoto.com in November 2008. Do not hesitate to contact us with more information on Ocean Boulevard.

In October 2008 Damen, the parent company of Amels, signed a contract with Blue Ocean Yacht Management (BOYM) for the construction of two Damen Fast Crew Supplier 5009’s. These two 51 metre vessels will be used as yacht support vessels for those yachts in their fleet. Among the superyachts in the fleet of BOYM are the 115 metre Pelorus and the 119 metre A.

Alloy Yachts, the well known New Zealand shipyard, has signed a contract for the construction of their largest superyacht to date. The 67.20 metre hull number AY 41. Although unconfirmed, it will most likely be a sailing yacht and delivery is scheduled for 2010.

We are looking for information on a superyacht called Mister P. She was built by CRN in 1986 and she is registered in Porto Santo Stefano, Italy. She is classed with RINA and her imo number is 1004285. Please contact us if you have more information.

The 44 metre Camper & Nicholsons Zein was sold in 2007 and since then, the whereabouts of this gentleman’s yacht has been a difficult one to track. Following her sale Zein was renamed Christine and is now cruising the Galapagos Islands. The yacht made history when she was given as a wedding gift to Prince Rainier and Princess Grace by Onassis. 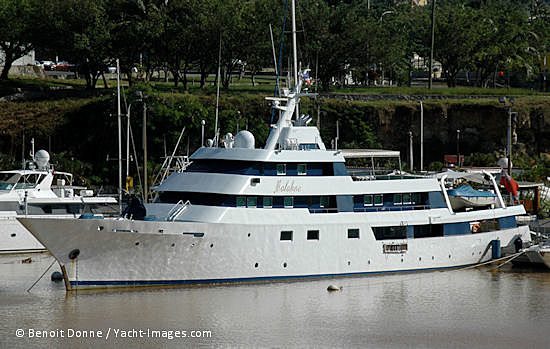 Another Camper & Nicholsons superyacht which came in the spotlight again is the 53.95 metre Malahne. After she had spent many years in Central America, she crossed the Atlantic last Summer and cruised in Italy, Montenegro and Croatia with her new owner.

We all know the Middle Eastern State Yachts, but a rather unknown Presidential Yacht is Al-Qasr, which means Palace. The 32 metre superyacht was built by the Izola Shipyard in Slovenia for the Sudanese Government. Al-Qasr was delivered in 2006 and reportedly the government is building another, but larger, yacht in China.

Another interesting and unknown Royal Yacht is Zaabil. Zaabil was one of the first Royal Yachts of Dubai and she was used by Sheikh Rashid, ruler of Dubai from 1958-1990. Very little is known about Zaabil; she has a length of approximately 45 meters and was most likely locally built. Please contact us if you have more information on Zaabil.