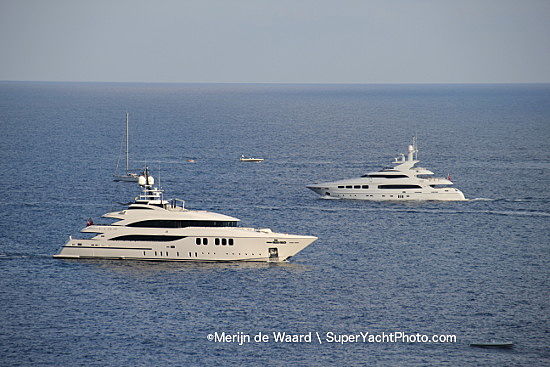 The Mondo Marine superyachts Alexander Again and Manifiq in Capri

Two Mondo Marine superyachts, the 49.15 metre Alexander Again and the 40.50 metre Manifiq, have been sighted cruising nearby one another in Capri, the Campania region of Italy.

Alexander Again was the 60th yacht launched by Mondo Marine when it was launched in 2011. She was designed by Giorgio Vafiadis, with her glossy black lacquer and rosewood interior the work of Luca Dini. She accommodates up to 10 guests over five staterooms, boasting a top speed of 19 knots and a cruising speed of 16 knots.

Manifiq was built in 2010 with Cor D. Rover Design as the naval architect, and Luca Dini, again, being responsible for the yachts interiors. Although she has an impressive maximum speed of 19 knots, Manifiq also has a range of 3,000 miles at a cruising speed of 12 knots.