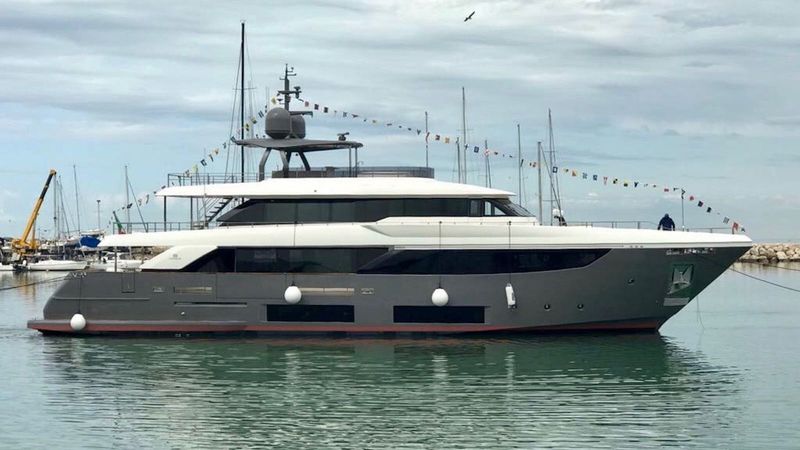 Photo: IYCBuilt by Custom Line, this Navetti 33 model launched on 5th April features a GRP hull and superstructure with naval architecture by the shipyard and both interior and exterior design by Zuccon International Project.

Frank Grzeszczak Jr. from the IYC Miami office served as the owner’s representative and had this to say about the new build project. “This model was chosen after more than two years exploring the market for the yacht that would meet the owner’s family needs."

The owner had a detailed checklist of requirements for their new superyacht, including large volumes in both the accommodation and the guest spaces volumes equivalent to a 40-metre yacht but in a model no longer than 33.5-metres. In addition, the owner also wanted the vessel to be full tri-deck, have elegant, yet aggressive, exterior lines, five large staterooms, and feature an abundance of natural light and extensive social spaces both inside and out.

“The design and spaces of Custom Line’s 33 Navetta model fit most of the client’s needs and we then worked with naval architect/designer Giuseppina Arena, who the owner had worked with in the past, to fully customise the model,” says Frank Jr. “When developing the yacht, every detail of every space was discussed, discussed again, and executed to the satisfaction of the owner, and his particular needs." He continues, “The team at Custom Line were extremely open-minded to new ideas to improve and meet the demands of this experienced owner, and the results speak for themselves."

Mirabilis will soon house an impressive collection of artwork across her bright, open interior spaces and she is expected to be delivered in mid-May this year, after which she will spend the summer cruising the Mediterranean.