It may have been due to the special atmosphere along the canal that the Cantieri di Pisa boatyard is located, or the surroundings or even the yard’s staff, but the meeting with Luciano Scaramuccia, CEO of both the Cantieri di Pisa and Cantieri Navali Baglietto boatyards, and Carlo Galeazzi, two of the main players in the new path the yard is taking, immediately turned into a very pleasant conversation, relaxed and without any rhetoric or the usual stereotype sentences, a conversation filled with love and passion for the yachting world and, in particular, for the work the Cantieri di Pisa has offered its clients so far. The quality of this yard seems to have never changed, at least not the main features, such as the external lines or the seafaring quality and safety features, or the craftsmanship and care taken by the cabinet makers and the master axmen.

These very same combinations still exist in today’s boats, even though the building materials used these days for the hull and superstructure tend to be composite materials, either traditional or advanced. As for the rest (seafaring quality, fittings, systems and everything else), tradition and experience still make up the value added our special clientele, almost a niche market, is looking for and has learned to appreciate and expect over these past years.

“The new Akhir 135’ is undoubtedly a real sign of the renewed strategies we have just undertaken and which will make the new 153’ the company’s flagship”: this is how Luciano Scaramuccia opened the conversation, and when he mentioned the largest boat, the 153’, there was a twinkle and a deep look of satisfaction in his eyes, so much so that we started to immagine something really special, something that, unfortunately, was still a secret since the yard was not letting on anything. “What we are particularly pleased about, and that we believe strongly in”, he continued, “is that the new models are all Akhir, they are all boats with that special family feeling, that will all be immediately recognisable but which, together with the values of our tradition, will all have some very new features, innovative solutions, like the focus on light, the use of internal and external space and the attentino paid to the people on board and socialising”.

“When I was asked to design these new boats”, said Carlo Galeazzi, architect, “I was very pleased, even though I felt the weight of the responsibility in putting my hands to something that had been created by someone I tended to consider a bit like a master, if not an icon:Pierluigi Spadolini. 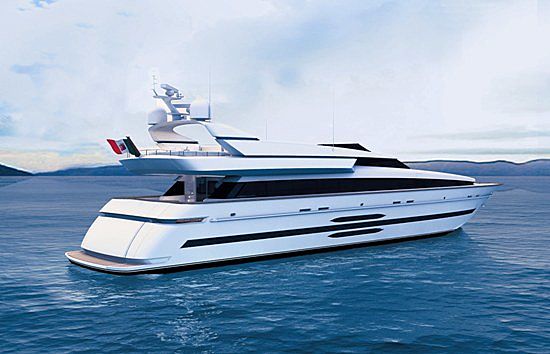 This is why we almost dived into the yard’s past, without ideological restraints, with an open mind in the search for telltale signs, well aware that the boat would have to be recognisable at a distance, and without the slightest doubt, as an Akhir but, when looked at more closely, had some very surprising features and innovative solutions. Pierluigi Spadolini’s imprint had, in some ways, to be refound and brought back to life: almost like passing the batton …with one’s gaze trained on the future, and to decisively intervene on certain aspects of tradition and to overhaul the look. So, features like the dark band around the windows and the portholes, the windows or the wheelhouse have been redesigned. One ever frequent request that at first sight seems to conflict with the Akhir style are the large windows that let a great deal of natural light into the yacht. Thanks to the addition of two central recesses, above and below the dark band around the portholes, we have managed to obtain a twopronged objective: not to spoil but to conserve the horizontal, sleek line that is so typical of Akhir boats and, at the same time, to let in a lot of light below deck”. The internal spaces are still one of the yard’s strengths; “the yard can boast a system to sandblast the teak that no other yard in the world uses”, said Luciano Scaramuccia with great pride, “a system that is often used and well exploited by the designers of the various boat owners that come to us”.

The pictures of the new boat clearly show this new cultural revision of a line that has made so much history and that is still today wonderfully up to date … “just as the edge shapes are modern”, continues Carlo Galeazzi, Akhir, stemmed from the use of woods and marine plywood and which have been brought back into use today, though softer thanks to the use of composite materials which have allowed us to obtain such a new line. Technologically new details, such as the way the window panes are fixed to the wheelhouse, slightly raised, thus making the fixing structure even more pure and clean”, he pointed out. 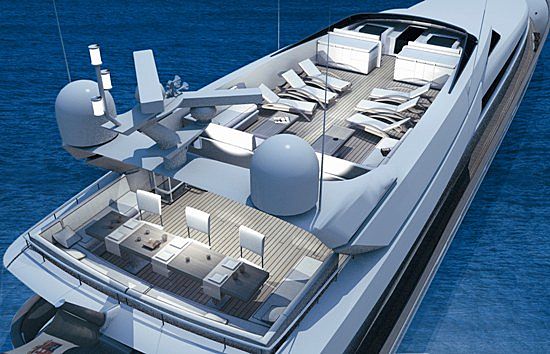 “The 135’ is a Cantieri di Pisa boat“ continued Luciano Scaramuccia; “as such it is still a custom yacht, a product for boat owners who do not want to be merely transported but who want to enjoy their yacht personally and thus demand performance, not so much in terms of speed but reliability, comfort and seafaring features, all tested just like only painstakingly hand-made boats that have been built in a number of examples can be”. All these qualities are to be found on the new 135’ and are put at the forefront together with the top class after sales service, for which the yard has invested heavily.

So, together with the Cantieri di Pisa boatyard’s traditional values, there is also the desire to renew, and it is exactly on this foundation that the yard’s new industrial strategy is being built, a strategy that really does look like it can keep up with the times, and even anticipate them, especially through the use of composite materials, such as carbon and “exotic” fibres, now a mainstay of the yard though still rare, if not unknown, in other boatyards. 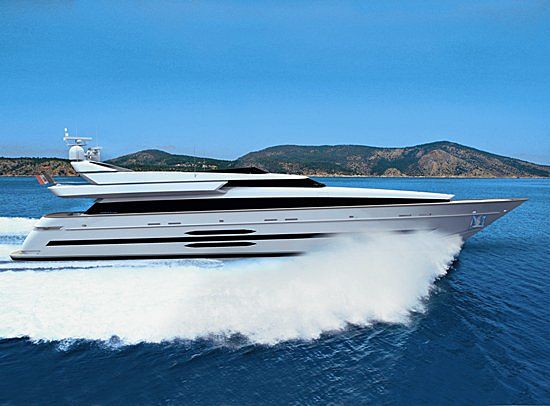 Today, the new Akhir 135’ brings out the positive aspects of the blend of the respect for tradition, the ability and strength of design and technological innovation and managerial skills. If this boat can so clearly ignite so much enthusiasm among the people who so carefully saw to its creation and development, then we must wonder what sort of feelings the future 153’ will stir up, a boat that the same people are very proud of …possibly a new magic formula, or the simple inversion of the last two numbers?