Chefs from eleven of the 27 participating yachts at this year’s Newport Charter Yacht Show (June 18-21) went head-to-head in Wednesday’s Culinary Competition, which was split into two classes: Grande Class, for yachts 100 feet and above, and Premier Class, for yachts 99 feet and under. Grande Class winner was Chef Eddj from the 145-foot motor vessel Lady M and Premier Class winner was Chef Megan from the 70-foot sail vessel Destiny. The four-day show, now in its 30th year, entered a new era in 2012 when Newport Exhibition Group took the helm to both produce and manage it at its Newport Yachting Center facility in downtown Newport. 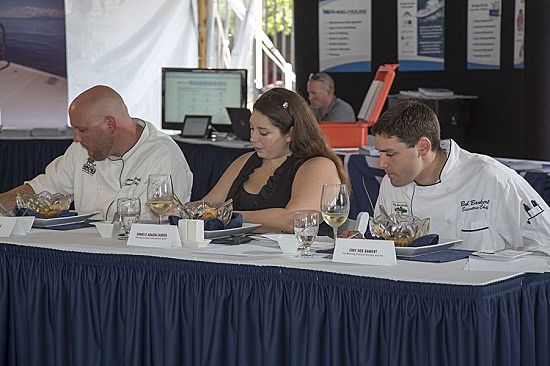 The morning of the competition, six chefs in the Grande Class were provided with a mystery basket that consisted of 40 local ingredients (grown or raised within a 50-mile radius of Newport, R.I.) and asked to return to their respective galleys to prepare a meal, of any cuisine, to be served to three judges: local Chef Bob Bankert of Mooring Seafood Kitchen and Bar; local Chef Matt Preble of the Smokehouse; and, from Florida, ShowBoats International Managing Editor Danielle Aragon Cabrera. 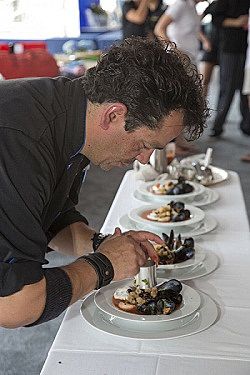 “I’ve worked as a chef on yachts for six years, but this is my first time to the Newport Charter Yacht Show,” said Chef Eddj who created the winning shellfish broth with pasta, spinach, ricotta cheese and marinara sauce, which secured him a three-page editorial/photo spread in ShowBoats (a sponsor of the show), a gift certificate to the Newport Restaurant Group and the Newport Wine Cellar and a collectable book from Boat International Media. “The amount of time we had to prepare this dish was about the same amount that we would need if we were serving to our guests onboard. It was great, and the show has been going well and I think it will get better each year.”

Along with five other chefs in the Premier Class, Chef Megan was served with the task of preparing the quintessential dish of New England – seafood chowder. When the dishes were complete, show attendees were invited to visit every competing yacht’s galley to taste the creations and vote for the best chowder. “This is my first time to the show, my first time to New England and my first time making chowder,” said the Texas native who has worked as a chef on boats for six years and made a cream-base chowder with lobster, halibut and scallops, which won her a gift certificate to the Newport Restaurant Group and a collectable book from Boat International Media. “I kind of winged it but got a lot of good advice and did my research. It was really fun and all the chefs on the boats helped each other and did taste tests.”