Home > News > The Nordhavn 120 to be delivered soon

The Nordhavn 120 #1 has undergone successful ocean trials and is on schedule to depart the South Coast Marine factory in Xiamen, China on July 12th. The yacht will be delivered by a crew of staff from Pacific Asian Enterprises, Inc. (P.A.E.) including Nordhavn’s vice president, Jim Leishman, and Chief of Design, Jeff Leishman. One port of call has been scheduled for Hong Kong on July 16th. From there the crossing will take approximately 25 days with an arrival to Vancouver in mid-August. 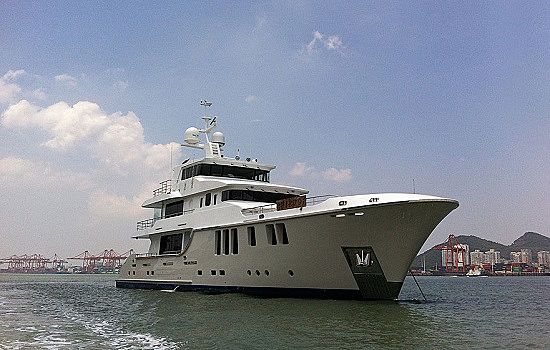 Due to logistics, the sheer mass of the vessel as well as economic factors, it’s been concluded that N120 hull #1 will be delivered on her own bottom. With a non-stop range from China to Vancouver running at displacement speed, the decision to “drive” her home was made thoughtfully, however, confidently. The goal is to make a quick and efficient passage running as fast as possible using the same classic fuel management practices utilized by the crews on board the Nordhavn 40 during the Around The World (ATW) voyage (as well as by hundreds of other Nordhavn owners during their own long passages).