Day one of racing at the Oyster BVI Regatta started at the Nanny Cay Marina, with a challenging course circling the Peter, Cooper and Ginger islands away across Drake Channel, finishing just off the privately owned Norman Island. In Class 2 Ken and Diana Randall’s Infiniti of Cowes started last but came in 3rd on the water and 1st corrected. Skipper Tim MacIntosh says, “We had two really good laylines, and were bang on Cooper Island, a bit of luck, a bit of judgement.” 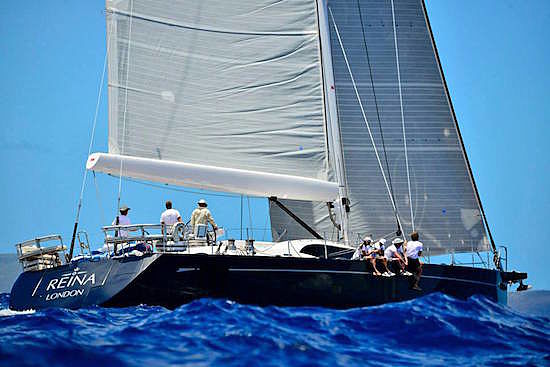 With the majority of the fleet opting for downwind sails, the final twist for all was a fine, time essential call before the last short leg: fight to keep or lose the kite. Infiniti again called it right, early, and countered the time loss others suffered in a delayed drop further slowed by then excessive upwind loading. Shaved seconds counted, saved minutes won. Infiniti took first spot. Later in dapper pirate guise and private parly, owners Ken and Diana joshed, “All right, we lucked out, the island moved over and the others didn’t realise!”

Second corrected behind Infiniti went to Peter Blackmore’s family-sailed Oyster 49 Pied Piper. “We could see the bigger boats in front, what’s happening, and took advantage of that.” It was also the first time the family had flown the kite since a midnight spinnaker incident while racing four years ago. They comment, “The team did great. We had a blast!” 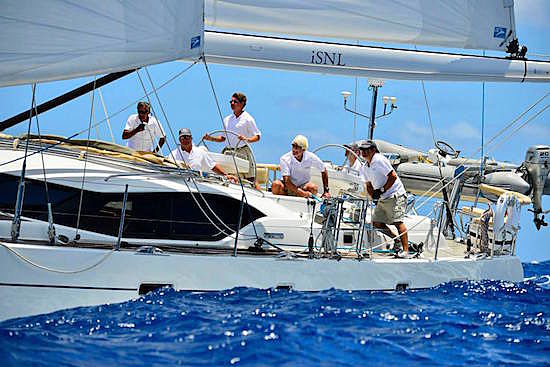 Staggered small group starts within both Classes 1 and 2 saw keen battling but none more so than between Class 1’s Oyster 825 Reina and Oyster 82 Starry Night of the Caribbean. In early manoeuvres Starry Night appeared to block Reina out on the committee boat end, then just on the gun Reina instead squirted through the tiniest slot higher and ahead to chase the smaller, earlier starting 625s, David and Joanne Furby’s Vamosand Lady Mariposa skippered by Dan Hardy.

Starting through the whole class has been sharp with all seven boats crossing within 18 seconds of the gun. Alan Parker’s Oyster 82 Dama de Noche, took the line just one second after the gun, later receiving one of the two daily Pantaenius awarded Best Start prizes. 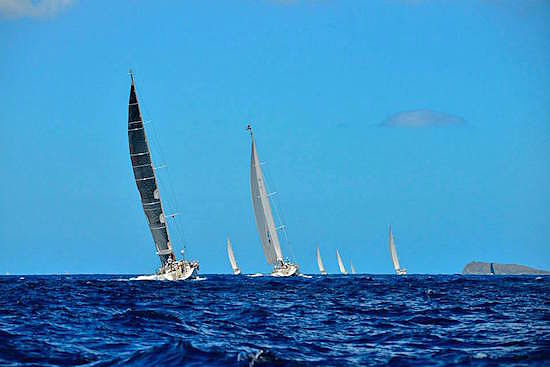 Back to the Class 1 action, in the 12-15 knot breeze of leg one, while Reina sprinted away from Starry Night, Mariposa ahead with a small blade jib against Vamos’ larger genoa, though pointing considerably higher, took some while to overcome Vamos’ matching boat speed. Then the wind hardened a knot or two and Mariposa pulled away. Meanwhile the three 82s, Dama de Noche (new owner Alan Parker), Zig Zag (also new owner John McMonigall) and Ravenous II (Bill Dockser) trailed each other looking on as the fully race crewed 82 Starry Night accelerated through from her later staggered start.

Out the back of the islands the game played out along tacking angles and laying the turning points before the long downwind leg home where gybe angles and duration down Drake Channel had equal import and effect. Some sailed just one long gybe back in toward Tortola and out, others played more. The leaders all sailed tight, with only 2 minutes and 27 seconds between the first three home: Mariposa, Starry Night and Reina. Reina played it so cleanly she was the single one boat in the fleet to cross the line with kite still flying. Mariposa took the well earned 1st and Starry Night in 2nd just 59 seconds ahead of Reina’s 3rd. Vamos notched a good 4th followed by Dama de Noche 5th, and Zig Zag 6th. Ravenous II showing great sportsmanship in 7th, racing whilst saddled with the unassailable handicap of a temporary, substitute propeller: a massive, fixed four-bladed affair acting as unfortunate brake.

Race Officer Oyster CEO David Tydeman comments, “It was very close racing. In class 1, only 4% difference between the first four boats. In Class 2, 3%. A very good day.” The regatta will conclude on the 18th April.