Home > News > The Oyster BVI Regatta round up

The second race day of the Oyster BVI Regatta ended at the Bitter End Yacht Club, with an anticipated four hours’ sail north-eastward on the far end of Virgin Gorda. The fleet set off with two-minute-staggered individual boat starts, the sequence following the reciprocal of Race One finish results. Last in on corrected was first out. 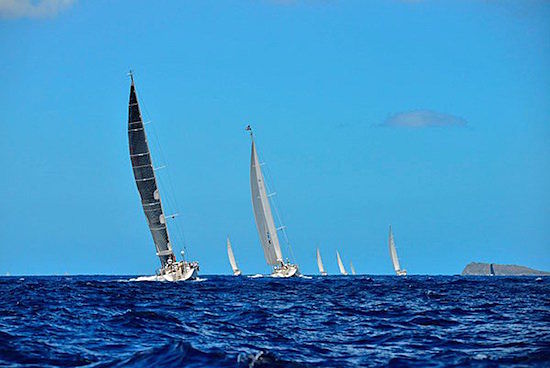 In Class 2, Ken and Diana Randall’s Oyster 72 Infiniti shot through the handicapping with her second bullet, while David and Leslie Joyce on Oyster 575 Ayesha II, lifted from Race One’s 6th to 2nd. Peter Blackmore’s Oyster 49 Pied Piper climbed, too, from 4th to 3rd just 20 seconds corrected behind Ayesha II. Remarkably,Ayesha II’s actual elapsed time on the water was within seconds of the bigger 655 iSNL and 625 Vamos. Furthermore, the three front runners in Class 2 beat Class 1’s Starry Night of the Caribbean on corrected time.

In Race One Alan Parker’s Oyster 82 Dama de Noche was just one second shy of the gun, on this second day of racing she was bang on the line. Sadly her race soon ended with the genoa clew blowing on her second tack in Drake Channel. But a smartly executed transfer of damaged genoa to a quickly arranged Doyle Sails launch in Road Town Harbour means she was back with the fleet for Race Three on Friday.

Results on this course demonstrated interesting traits of the different rigs. With a predicted too-tight fetch for down wind sails, Zig Zag like all others went white sails only. Lady Mariposa and Reina were able to tack back and forth at a pace, taking minutes off the slower to tack double-headers. Meanwhile Ayesha II (Oyster 575), with custom configured sail handling systems, and respectful of the power in their fully battened main, kept a reef in until the latter stages, then shook it out for the and saw their 9.4 knots on the fetch jump to near 11 knots. Saving 4.5 minutes that way clearly was part of their lift to 2nd place.

John McMonigall driving Zig Zag captures the Oyster regatta mood, “It was great fun, what better day in your life than whacking down those islands!”

Similarly, Jereon Hemels, owner driver of Reina who before the Oyster’s Palma regatta last year had never helmed this kind of sailing. “We really enjoyed today, loved it, the concentration to get the best of the boat. And here in the BVI, I’ve never experienced anything like it before. It’s great, not to take it lightly, to go for it, to get the result.”

Held from the 13th to 18th April, the Oyster Regatta has now concluded.