Looking down from the quay on the deck of Atlantic it is impossible not to remain fascinated. The beauty of this strikingly large and slender three mast schooner is overwhelming. 56 meters of impeccably laid teak deck interrupted only by a few lacquered teak deckhouses and skylights and by a partition caused by the characteristic slightly raised aft deck. 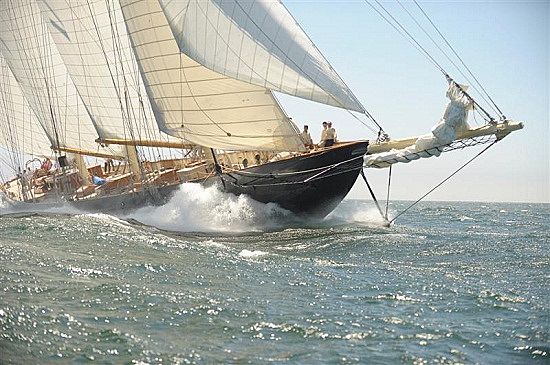 The raven black high-gloss hull reflects every ripple in the water. And looking up at the three towering masts one senses the enormous power this yacht must have. The mighty Atlantic, the schooner of all schooners, left Rotterdam on June 23rd and has now finished her sea trials. The builder/owner Ed Kastelein has achieved another milestone in reviving yachting history. After recreating Westward, he has gone for the world cup in recreating legendary yachts of the past and he has won convincingly with the realization of Atlantic.

The original, designed by William Gardner, was launched on July 28th 1903. No one could have foreseen then that the schooner would gain enduring fame winning the Kaiser’s Cup from New York to The Lizard in the spring of 1905, under command of the renowned captain Charlie Barr. The Atlantic set the record for the transatlantic crossing at 12 days, 4 hours and 1 minute. A mono-hull record that would stand for 100 years. The schooner was the quintessential cruiser/racer. She could do 17 knots on her steam engine of 400hp, weighing 30 tons including boiler, exclusive fuel. Two generators provided for electricity. She had heating, refrigeration, and water heaters. The lobby was executed in marble and the interior was fitted out with the finest mahogany panelling. There were large and luxurious tiled bathrooms (with bath tub) and a large galley.