The Rodriguez Group ended the fourth quarter of its financial year 2011/2012 on 30 September 2012, marked by the sale of its new 50-metre megayacht, the 165’ Azul. Barely two months after delivery, in July 2012, of the 40 Alloy Sanlorenzo and the 43-metre Italyachts, the success of the new range of large Rodriguez Group yachts materialized with the sale of this all-aluminium yacht. 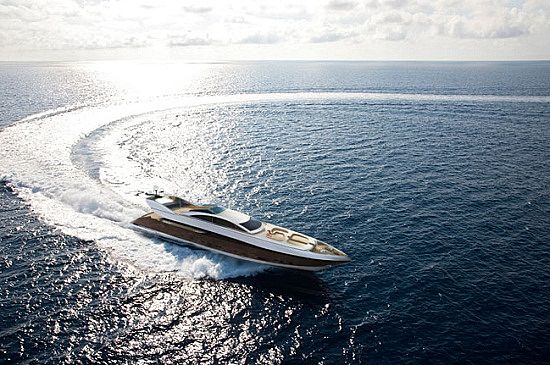 Created in the summer of 2010, the project was conceived and developed by the Rodriguez Group sales teams, in collaboration with the Italian naval architect Andrea Bacigalupo, to whom the boat owes its streamlined shape and the perfect mix between living capacity (five cabins, including an owner’s suite with access to the main deck, an upper deck opening onto a large terrace equipped with a bar, solarium and Jacuzzi) and sailing speed.

Powered by Rolls Royce hydrojets and two MTU 2600Hp engines, this exceptional yacht can reach 30 knots with a draught not exceeding 1.75 metres: a feat for a unit of this size.

With three large units delivered or sold during the summer of 2012, the Rodriguez Group confirms the pertinence of its business plan, which aims to anticipate, and even create, the needs of its customers.

For the financial year 2011/2012, boat sales recorded a total turnover of close to € 50 million, compared to € 70.8 million the previous year. This drop in turnover calls for two comments:

- it is partly a consequence of the drop in turnover linked to the sale of second-hand yachts, going from €17 million in the financial year 2010/2011 to €8.4 million this past year; as announced by the Rodriguez Group, the policy of clearing stock and limitation of trade-ins was successful, with the sale of the last large vessels from the old stock;
- The Rodriguez Group now favours the generation of a turnover that generates margin, by focusing on the design and sale of large new units with longer production times (the first 165’ Azul will be delivered in 2014) rather than volume.

For the management of the Rodriguez Group the improvement of this ratio is the concrete materialisation of strategic directions taken by the Group over the past two years, organized around two important mainstays:

Consequently, the Services business confirms its strong performance of previous years, by generating a turnover of € 28.3 million for the financial year 2011/2012, in line with the € 29.2 million recorded for the year 2010/2011.

More than ever, the good health of the Services business--which includes the brokerage transactions carried out by CNI affirms the Rodriguez Group as a major player in all the occupations of the yachting business.