This winter, American entrepreneur Joe Hollingsworth, Jr. finally realized his dream of taking family and friends on an extended Caribbean cruise aboard a luxury charter yacht, with help from The Sacks Group Yachting Professionals. The charter, which lasted for 29 days, spanned the Caribbean island chain from Grenada to St. Maarten. 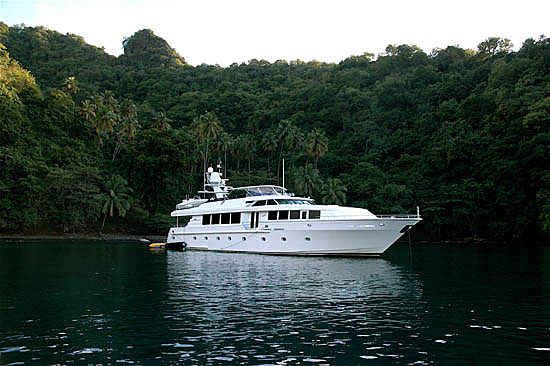 “I’ve had the idea for probably about twenty years, but the problem with the idea was it was so big and comprehensive,” Hollingsworth said. Then he met The Sacks Group President and Charter Specialist Jennifer M. Saia at the 2008 Yacht & Brokerage Show in Miami. “Jennifer is a really enthusiastic person and dedicated herself to making my dreams come true,” he said. Saia also enjoyed their collaboration. “He is such a positive spirit, that I couldn’t wait to hear his ideas, match them with a realistic itinerary and find the right yacht to make it happen.” 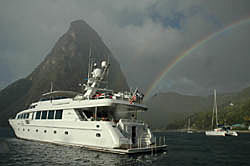 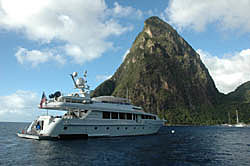 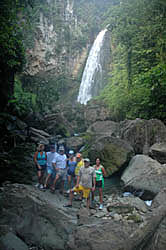 After an intensive search, she found the perfect vessel –118' Savannah, the comfortable, four-stateroom Intermarine motor yacht run by Captain Alvin Burkett and his highly experienced crew. Hollingsworth worked with Saia, her assistant Ali Kaufmann and Capt. Burkett for nearly a year in planning the complex, tailor-made vacation. “This was not a cookie-cutter charter,” Saia said.

At the client’s request, they divided the trip into five segments of five nights each, with one “lay-day” in between, flying different groups to the Caribbean to join Hollingsworth and his girlfriend, Cristy Howell, on Savannah for each segment. In addition to producing a highly detailed itinerary describing all the islands along their route, which included the Leeward and Windward Islands, they organized different activities for each day that matched the particular interests of the guests who would be on board. Saia also planned fun theme nights and formal dinners for each of the segments with the assistance of the Chief Stewardess, Jonna Prescott. 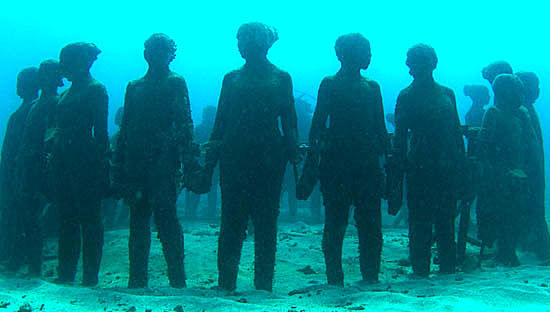 “Planning was the key to success for the cruise,” Capt. Burkett said. “From Mr. Hollingsworth’s ideas to the detailed communication with Jennifer and Ali and the implementation by the crew, everything was in place before we left the dock in Grenada.” Among the many highlights of the trip was scuba diving (dive gear is part of Savannah’s large suite of water toys) in a wide variety of spectacular locations, including Jason deCaires Taylor’s underwater sculpture gallery off Grenada (above). “We introduced twelve new people to scuba diving,” said Hollingsworth, for whom his guests’ enjoyment clearly was as important as his own. 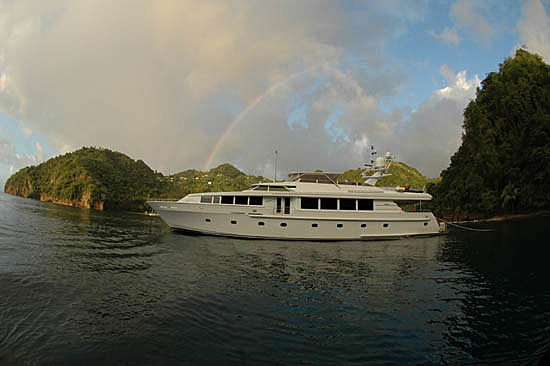 “Most of the people who made this trip spontaneously coined the phrase, ‘This is the trip of my lifetime,’” he said. Capt. Burkett reported that the guests’ enthusiasm also spread to the crew. Hollingsworth reported that they went up a river covered by a canopy of trees that was depicted in the movie Pirates of the Caribbean. “It was eerie,” he said. They hiked to a 700-foot- high waterfall. They soaked in the sun in Savannah’s hot tub. They slept on deck in the moonlight. Shopping in Grenada and scooter rides in St. Barths also scored high marks. He and Howell particularly enjoyed a romantic afternoon, “walking on a desolate, fourteen-mile beach in Barbuda with pink sparkling sand,” Hollingsworth said. “We expected a ‘10’ and we got a ‘12’ or ‘14’,” he summed up.

This “charter of a lifetime” probably won’t be his last. “We’re already talking about another charter two years from now – a Mediterranean experience,” said Saia. “The Sacks Group’s hallmark is: ‘Around The World in 80 Ways®.’”